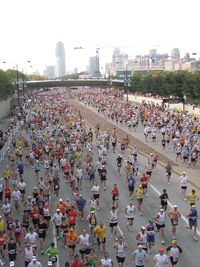 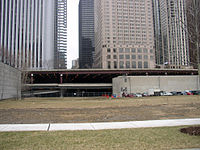 Looking west at the three-level Columbus Drive from Lakeshore East

Columbus Drive is a north-south street in Chicago, Illinois which bisects Grant Park. It is 254 E in Chicago's street numbering system. Its south end is an interchange with Lake Shore Drive (US 41) at Soldier Field. North of Illinois Street it becomes Fairbanks Court and continues north ending at Chicago Avenue.

In the Illinois Center development, the main lanes of Columbus are on the middle level of a three-level structure. That level intersects with the middle levels of Randolph Street, Lake Street, South Water Street and Wacker Drive. All these streets also exist on the lower and upper levels, except for Lake, which is a pedestrian mall on the upper level; both of these levels go only from Randolph to Wacker. Ramps are connected directly to Columbus at the following points:

Columbus Drive crosses the Chicago River on the Columbus Avenue Bridge, a bascule bridge. North of the river, it crosses the upper level of North Water Street and passes over the lower level before going down to ground level at Illinois Street.

Columbus originally only went south from Monroe Street, south of Illinois Center. In 1980, it was extended to Wacker, including the three-level portion, and it was built over the Chicago River in 1982, connecting to Fairbanks Court. In 1992 the upper level of North Water was built.