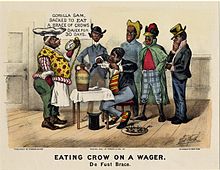 Eating crow is a U.S. colloquial idiom,[1] meaning humiliation by admitting wrongness or having been proved wrong after taking a strong position.[2] Eating crow is presumably foul-tasting in the same way that being proved wrong might be emotionally hard to swallow.[2] The exact origin of the idiom is unknown, but it probably began with an American story published around 1850 about a slow-witted New York farmer.[3] Eating crow is of a family of idioms having to do with eating and being proved incorrect, such as to "eat dirt", to "eat your words", and to "eat your hat" (or shoe).[2]

Literally eating a crow is traditionally seen as being distasteful; the crow is one of the birds listed in Leviticus chapter 11 [4] as being unfit for eating. Scavenging carrion eaters have a long association with the battlefield, "They left the corpses behind for the raven, never was there greater slaughter in this island," says the Anglo-Saxon Chronicle. Along with buzzards, rats, and other carrion-eating scavenging animals, there is a tradition in Western culture going back to at least the Middle Ages of seeing them as distasteful (even illegal at times) to eat,[5] and thus naturally humiliating if forced to consume against one's will.[2]

In the modern idiomatic sense, eating crow probably first appeared in print in 1850, as an American humor piece about a rube farmer near Lake Mahopack, New York.[3] The OED V2 says the story was first published as "Eating Crow" in San Francisco's Daily Evening Picayune (Dec. 3, 1851),[1] but two other early versions exist, one in The Knickerbocker (date unknown),[3] and one in the Saturday Evening Post (Nov. 2, 1850) called "Can You Eat Crow?".[3] All tell a similar story: a slow-witted New York farmer is outfoxed by his (presumed urban)[3] boarders; after they complain about the poor food being served, the farmer claims he "kin eat anything", and the boarders ask if he can eat a crow. "I kin eat a crow!", he says. The boarders spike the crow with Scotch snuff, and the story ends with the punch line: "I kin eat a crow, but I be darned if I hanker after it."[3] Although the humor might produce a weak smile today, it was probably a knee slapper by 19th century standards, guaranteeing the story would be often retold in print and word of mouth, thus explaining, in part, the idiom's origin.[3] In 1854 Samuel Putnam Avery published a version called "Crow Eating" in his collection Mrs. Parkington's Carpet-Bag of Fun.[6]

A similar British idiom is to eat humble pie.[2] The English phrase is something of a pun—"umbles" were the intestines, offal and other less valued meats of a deer. Pies made of this were known to be served to those of lesser class who did not eat at the king's/lord's/governor's table. Another dish likely to be served with humble pie is rook pie (rooks being closely related to crows). "Pie" is also an antiquated term for the European Magpie[7], a type of crow. There is a similarity with the American version of "umble", since the Oxford English Dictionary defines crow (sb3) as meaning "intestine or mesentery of an animal" and cites usages from the 17th century into the 19th century (e.g., Farley, Lond Art of Cookery: "the harslet, which consists of the liver, crow, kidneys, and skirts)."[8]

Notable examples of use

The following examples illustrate notable uses of the idiom after its origin in the 1850s.

Rudyard Kipling (1865–1936) used this concept as a central metaphor in his short story "The Strange Ride of Morrowbie Jukes" (1885). Morrowbie Jukes, a European colonist in India, falls into a sand-pit from which he cannot escape. Another man, a native Indian, is also trapped there who catches wild crows and eats them, but Morrowbie in his pride declares, "I shall never eat crow!" After days of nothing to eat, his hunger and desperation finally force him to do what he swore he would never do: literally eat crow.[9]

After incumbent Harry Truman defeated Thomas Dewey in the 1948 United States presidential election despite many media predictions of a Dewey victory, the Washington Post sent a telegram to the victor:

You Are Hereby Invited To A "Crow Banquet" To Which This Newspaper Proposes To Invite Newspaper Editorial Writers, Political Reporters And Editors, Including Our Own, Along With Pollsters, Radio Commentators And Columnists . . . Main Course Will Consist Of Breast Of Tough Old Crow En Glace. (You Will Eat Turkey.)[10]