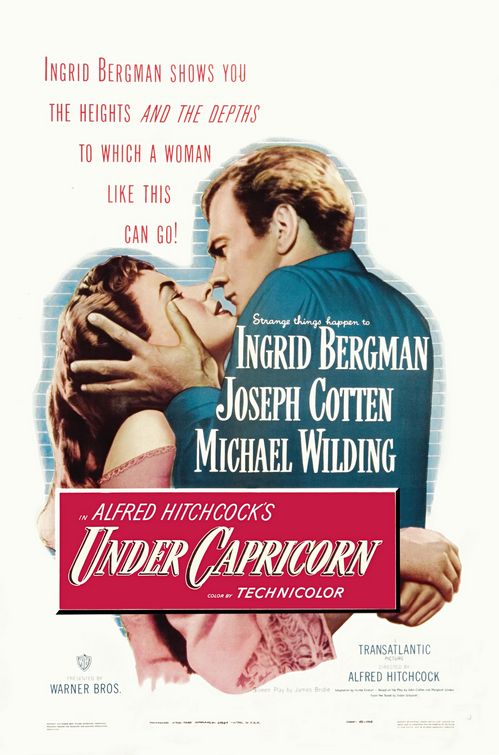 "Under Capricorn" (1949) is an film based on a novel by Helen Simpson, with screenplay written by , and adaptation by . The movie was co-produced by Hitchcock and for their short-lived production company and released through The film starred , , Michael Wilding, and .

The film was Hitchcock's second film in and uses ten-minute takes similar to those in Hitchcock's film "Rope" (1948). It is believed that the audience thought "Under Capricorn" was going to be a thriller, which it was not -- it was a domestic love triangle with a few thriller elements thrown in -- which apparently led to its box office failure. However, the public reception of the film may not have been helped by the revelation in 1949 of Bergman's illicit relationship with, and subsequent pregnancy by, Italian film director .

In , Charles Adare (Wilding) arrives with his uncle, the new governor (). Charles hopes to make his fortune in Sydney. He is befriended by Samson Flusky (Cotten), a prosperous ex-convict. Sam's wife, Lady Henrietta (Bergman), was a friend of Charles's sister in Ireland. Sam hopes that Charles will cheer up his wife, who is an alcoholic. Meanwhile the housekeeper, Milly (Leighton), secretly loves Sam, and encourages Henrietta's drinking. Sam has been sent to an Australian prison after he confessed to a killing actually committed by Henrietta, who followed Sam and waited for his release...

*Alfred Hitchcock cameo: A signature occurrence in almost all of Hitchcock's films, he can be seen in the town square during a parade, wearing a blue coat and brown hat at the beginning of the film. He is also one of three men on the steps of Government House 10 minutes later.

*In "Truffaut/Hitchcock" (New York: Simon and Schuster, 1967), Hitchcock told that "Under Capricorn" was such a failure that the banks that financed it repossessed the film, which wasn't shown on U.S. network television until 1968. In the Truffaut interview, Hitchcock also mentioned the "" reviewer, who wrote that the viewer had to wait almost 100 minutes for the first suspenseful moment.

In Peter Bogdanovich/Alfred Hitchcock Interview, it is mentioned that French Critics considers Under Capricorn as one of Hitchcock's finest films.

Playwright James Bridie wrote the screenplay for Under Capricorn. James Bridie is famous for his biblical plays. Jonah and the Whale is a great example. There are lots of Christian references in Under Capricorn. Here are some examples. Near to the end of the film, Milly says "The Lord works in mysterious ways." Samson Flusky says "What is it they say in the Bible? Great Gulf Fixed."

In "Style and Meaning: Studies in the Detailed Analysis of Film" (Manchester: , 2005), Ed Gallafent's article "The Dandy and Magdalene: Interpreting the Long Take in Hitchcock’s "Under Capricorn" (1949)" says:

"The use of the long take in "Under Capricorn" relates to three elements of film's meaning.

# Ideas of accessible and inaccessible space as expressed in the gothic house.
# The form in which character inhabit their past
# The divergence or convergence of eyelines – the gaze that cannot, or must meet another’s.

All of these three elements can be linked to concepts of Guilt and Shame. In 1 and 2, the question is how something is felt to be present. In 3, it is difference between representation or sharing, of the past as flashback, and of the past as spoken narrative, where part of what is being articulated is precisely the inaccessibility of the past, its experience being locked inside the speaker. As for 3, the avoided gaze is determining physical sign of shame."

Gallafent, professor of film at , also explains these aspects of "Under Capricorn":

The inscription on the Bergman character's house -- Minyago Yugilla –- means "Why weepest thou?"

St. (the patron saint of penitent sinners) in religious iconography: the bare feet, skull, the flail, the looking glass in which beholder’s is not always reflected, the jewels cast down to floor. All of these images are in the film. Sources for the imagery that Hitchcock might have had in mind are the paintings "St. Mary Magdalene With a Candle" (1630-1635) and "St. Mary Magdalene With a Mirror" (1635-1645), both by Georges de la Tour.