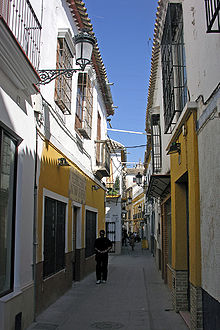 A street in Écija

Écija is a city belonging to the province of Seville, Spain. It is located in the Andalusian countryside, 85 km east of the city of Seville. According to the 2008 census, Écija has a total population of 40,100 inhabitants, ranking as the fifth most populous city in the province. The river Genil, the main tributary of the river Guadalquivir, runs through the urban area of the city.

The economy of Écija is based on agriculture (olives, cereals and vegetables), cattle (cows and horses) and textile industry. The city has over twenty churches and convents, some of them with either Gothic, Mudéjar, Renaissance or Baroque towers or bell-gables, as well as an Arab fortress.

Ancient Iberian finds date back to the 8th century BC, and there are several archaeological remains of later Greek and Roman settlements. In Roman times the town was at first known as Astigi. During the Roman civil war Écija stood "firmly"[1] at the side of Julius Caesar in the Battle of Munda. As a reward Caesar ordered the town's fortification and refounded it as a Julian colony, possibly Colonia Iulia Firma Astigitana. Under the reign of Octavian, the later emperor Augustus, the colony was strengthened according to Caesar's construction plans, and its name was finalized as Colonia Iulia Augusta Firma Astigitana.[2]

Astigi was an important town of Hispania Baetica, and the seat of Astigitanus, one of the four conventi where the chief men met together at major centers, at fixed times of year, under the eye of the proconsul, to oversee the administration of justice, was also an early seat of a diocese; St. Fulgentius, bishop of Astigi (died before 633), was named to the see by his brother Isidore of Seville. Though it was suppressed in 1144, Astigi remains a titular see in the Roman Catholic Church.[3]

Although Astigi was one of the largest and most complete Roman cities ever to be unearthed, mayor Julian Álvarez Pernía decided in 1998 to bulldoze Écija's Roman ruins and replace them with a 299-car parking lot.[4]

Écija is known in Spain as La sartén de Andalucía ("The Frying Pan of Andalusia"), because it records the highest summer temperatures in the nation. It once reached an outstanding 52 degrees celsius. In the summer temperatures can reach 45–47°C during the day and 26–35°C at night.