The Devil Rides Out (film)

The Devil Rides Out (film) 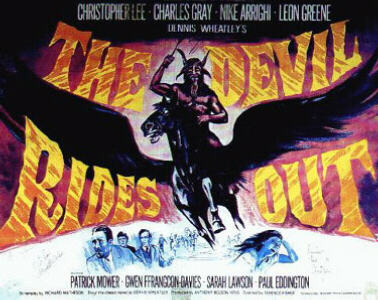 Set in 1930s London and the south of England, Duc de Richleau and Rex van Ryn rescue their friend Simon Aron and another young initiate, , from a devil worshipping cult. During the rescue they disrupt a ceremony on in which himself appears. They escape to the home of the Eatons, friends of Richleau and van Ryn, and are followed by the group's leader, Mocata, who has a psychic connection to the two initiates. After visiting the house to discuss the matter and an unsuccessful attempt to influence the initiates to return, Mocata forces Richleau and the other occupants to defend themselves through a night of black magic attacks. Their successful defence ultimately results in Mocata himself paying the price of loss of life and eternal damnation of his soul for having wrongly summoned The Angel of Death.

First proposed in , the film eventually went ahead four years later once censorship worries over had eased. Production began on , and the film starred , Charles Gray, and . The screenplay was adapted by from Wheatley's novel. In the the film was retitled "The Devil's Bride". Christopher Lee has often stated that of all his vast back catalogue of films this is his favourite and the one he would like to see remade with modern special effects and with him playing a mature Duc de Richleau. [cite web|title= Cult Movies: The Devil Rides Out|publisher= Cult Movies|date= 2001-10-04|url= http://www.eccentric-cinema.com/cult_movies/devil_rides.htm|accessdate = 2007-10-22]