Coralline algae are red algae in the order Corallinales. They are characterized by a thallus that is hard because of calcareous deposits contained within the cell walls. The colors of these algae are most typically pink, or some other shade of red, but some species can be purple, yellow, blue, white or gray-green.

Unattached specimens (maerl, rhodoliths) may form relatively smooth compact balls to warty or fruticose thalli. Many are typically encrusting and rock-like, found in marine waters all over the world.

A close look at almost any intertidal rocky shore or coral reef will reveal an abundance of pink to pinkish-grey patches, splashed as though by a mad painter over rock surfaces. These patches of pink paint are actually living algae: crustose coralline red algae. The red algae belong to the division Rhodophyta, within which the coralline algae form a distinct, exclusively marine order, the Corallinales. There are over 1600 described species of nongeniculate coralline algae.[5]

The corallines are presently grouped into two families on the basis of their reproductive structures.[6]

Coralline algae are widespread in all of the world's oceans, where they often cover close to 100% of rocky substrata. Many are epiphytic (grow on other algae or marine angiosperms), or epizoic (grow on animals), and some are even parasitic on other corallines. Despite their ubiquity, the coralline algae are poorly known by ecologists, and even by specialist phycologists (people who study algae). For example, a recent book on the seaweeds of Hawaii does not include any crustose coralline algae, even though corallines are quite well studied there and dominate many marine areas.

Traditionally, corallines have been divided into two groups, although this division does not constitute a taxonomic grouping:

Geniculate corallines are branching, tree-like plants which are attached to the substratum by crustose or calcified, root-like holdfasts. The plants are made flexible by having noncalcified sections (genicula) separating longer calcified sections (intergenicula). Nongeniculate corallines range from a few micrometres to several centimetres thick crusts. They are often very slow growing, and may occur on rock, coral skeletons, shells, other algae or seagrasses. Crusts may be thin and leafy to thick and strongly adherent. Some are parasitic or partly endophytic on other corallines. Many coralline crusts produce knobby protuberances ranging from a millimetre to several centimetres high. Some are free-living as rhodoliths (rounded, free-living specimens). 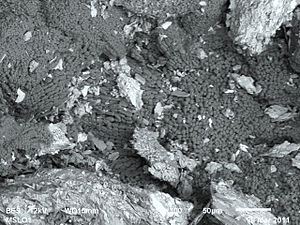 The corallines are always calcified. They may bear conceptacles; their cells may fuse, and they may exhibit secondary pit connections.[7] They are capable of constructing stromatolites.[8]

Thalli can be divided into three layers: the hypothallus, perithallus and epithallus.[9] The epithallus is periodically shed, either in sheets or piecemeal.[10]

Corallines live in varying depths of water, ranging from periodically-exposed intertidal settings to 270 m water depth (around the maximum penetration of light).[11] Although some species can tolerate brackish[11] or hypersaline[12] waters, no freshwater species exist. (Some species of the morphologically-similar, but non-calcifying, Hildenbrandia, however, can survive in fresh water.) A wide range of turbidities and nutrient concentrations can be tolerated.[11]

Corallines, especially encrusting forms, are slow growers, and expand by 0.1 to 80 mm annually.[11] All corallines begin with a crustose stage; some later become "frondose".[13]

As sessile encrusting organisms, the corallines are prone to overgrowth by other "fouling" algae. The group have many defences to such immuration, most of which depend on waves disturbing their thalli. However, the most relied-upon method involves waiting for herbivores to devour the potential encrusters.[14] This places them in the unusual position of requiring herbivory, rather than benefiting from its avoidance.[15] Many species periodically slough their surface epithallus – and anything attached to it.[14]

Some corallines slough off a surface layer of epithallial cells, which in a few cases may be an antifouling mechanism which serves the same function as enhancing herbivore recruitment. This also affects the community, as many algae recruit on the surface of a sloughing coralline, and are then lost with the surface layer of cells. This can also generate patchiness within the community. The common Indo-Pacific corallines, Neogoniolithon fosliei and Sporolithon ptychoides, slough epithallial cells in continuous sheets which often lie on the surface of the plants.

Not all sloughing serves an antifouling function. Epithallial shedding in most corallines is probably simply a means of getting rid of damaged cells whose metabolic function has become impaired. Morton and his students studied sloughing in the South African intertidal coralline alga, Spongites yendoi, a species which sloughs up to 50% of its thickness twice a year. This deep-layer sloughing, which is energetically costly, does not affect seaweed recruitment when herbivores are removed. The surface of these plants is usually kept clean by herbivores, particularly the pear limpet, Patella cochlear. Sloughing in this case is probably a means of eliminating old reproductive structures and grazer-damaged surface cells, and reducing the likelihood of surface penetration by burrowing organisms.

The corallines have an excellent fossil record from the Early Cretaceous onwards, consistent with molecular clocks that show the divergence of the modern taxa beginning in this period.[1] The fossil record of nonarticulated forms is better; the nonmineralized genuiculae of articulated forms break down quickly, scattering the mineralized portions, which decay more quickly.[1]

The earliest "corallines" known date from the Ordovician,[2][3] although modern forms radiated in the Cretaceous.[7] True corallines are found in rocks of Jurassic age onwards.[16] Stem group corallines are reported from the Ediacaran Doushantuo formation;[7] later stem-group forms include Arenigiphyllum, Petrophyton, Graticula, and Archaeolithophyllum. The corallines were thought to have evolved from within the Solenoporaceae,[17] a view that has been disputed.[18] Their fossil record matches their molecular history, and is complete and continuous.[1]

The Sporolithaceae tend to be more diverse in periods of high ocean temperatures; the opposite is true for the Corallinaceae.[11] The group's diversity has closely tracked the efficiency of grazing herbivores; for instance, the Eocene appearance of parrotfish marked a spike in coralline diversity, and the extinction of many delicately branched (and thus predation-prone) forms.[14]

The group's internal taxonomy is in a state of flux; molecular studies are proving more reliable than morphological methods in approximating relationships within the group.[19]

Fresh surfaces are generally colonized by thin crusts, which are replaced by thicker or branched forms during succession over the course of one (in the tropics) to ten (in the Arctic) years.[14]

The corallines deposit calcite in their cell walls; the c-axis is perpendicular to the cell wall. The calcite sometimes contains magnesium; the Mg content varies from individual to individual.[20]

The first coralline alga recognized as a living organism was probably Corallina in the 1st century AD.[21] In 1837 Rodolfo Amando Philippi recognized coralline algae were not animals, and he proposed the two generic names Lithophyllum and Lithothamnion as Lithothamnium.[21] For many years, they were included in the order Cryptonemiales as the family Corallinaceae until, in 1986, they were raised to the order Corallinales. 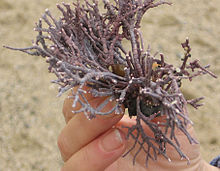 Many corallines produce chemicals which promote the settlement of the larvae of certain herbivorous invertebrates, particularly abalone. Larval settlement is adaptive for the corallines because the herbivores remove epiphytes which might otherwise smother the crusts and preempt available light. Settlement is also important for abalone aquaculture; corallines appear to enhance larval metamorphosis and the survival of larvae through the critical settlement period. It also has significance at the community level; the presence of herbivores associated with corallines can generate patchiness in the survival of young stages of dominant seaweeds. This has been seen this in eastern Canada, and it is suspected the same phenomenon occurs on Indo-Pacific coral reefs, yet nothing is known about the herbivore enhancement role of Indo-Pacific corallines, or whether this phenomenon is important in coral reef communities.

Some coralline algae develop into thick crusts which provide microhabitat for many invertebrates. For example, off eastern Canada, Morton found juvenile sea urchins, chitons, and limpets suffer nearly 100% mortality due to fish predation unless they are protected by knobby and undercut coralline algae. This is probably an important factor affecting the distribution and grazing effects of herbivores within marine communities. Nothing is known about the microhabitat role of Indo-Pacific corallines. However, the most common species in the region, Hydrolithon onkodes, often forms an intimate relationship with the chiton Cryptoplax larvaeformis. The chiton lives in burrows it makes in H. onkodes plants, and comes out at night to graze on the surface of the coralline. This combination of grazing and burrowing results in a peculiar growth form (called "castles") in H. onkodes, in which the coralline produces nearly vertical, irregularly curved lamellae. Coralline algae are part of the diet of shingle urchins (Colobocentrotus atratus).

Nongeniculate corallines are of particular significance in the ecology of coral reefs, where they provide calcareous material to the structure of the reef, help cement the reef together, and are important sources of primary production. Coralline algae are especially important in reef construction, as they lay down calcium carbonate as calcite. Although they contribute considerable bulk to the calcium carbonate structure of coral reefs, their more important role in most areas of the reef, is in acting as the cement which binds the reef materials into a sturdy structure.

Corallines are particularly important in constructing the algal ridge's reef framework for surf-pounded reefs in both the Atlantic and Indo-Pacific regions. Algal ridges are carbonate frameworks constructed mainly by nongeniculate coralline algae (after Adey 1978). They require high and persistent wave action to form, so develop best on windward reefs with little or no seasonal change in wind direction. Algal ridges are one of the main reef structures that prevent oceanic waves from striking adjacent coastlines, helping to prevent coastal erosion.

Because of their calcified structure, coralline algae have a number of economic uses. The collection of unattached corallines (maërl) for use as soil conditioners dates to the 18th century. This is particularly significant in Britain and France, where more than 300,000 tonnes of Phymatolithon calcareum (Pallas) Adey & McKinnin and Lithothamnion corallioides are dredged annually. Some harvesting of maërl beds that span several thousand kilometres off the coast of Brazil takes place. These beds contain as-yet undetermined species belonging to the genera Lithothamnion and Lithophyllum. Maërl is also used as a food additive for cattle and pigs, as well as in the filtration of acidic drinking water.

Since coralline algae contain calcium carbonate, they fossilize fairly well. They are particularly significant as stratigraphic markers in petroleum geology. Coralline rock also functions as building stones, with the best examples being in Vienna, Austria.

As a colorful component of live rock sold in the marine aquarium trade, and an important part of reef health, coralline algae are desired in home aquariums for their aesthetic qualities, and ostensible benefit to the tank ecosystem.