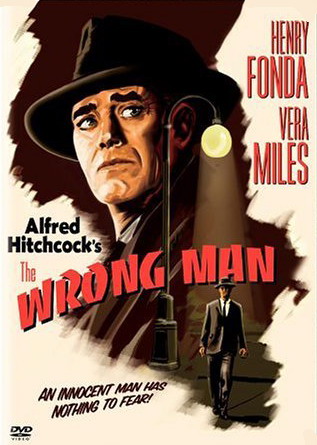 "The Wrong Man" is a by which stars and . The film is based on a true story of an innocent man charged for a crime he didn't commit, even though witnesses swear he's guilty.

The story was based on the book "The True Story of Christopher Emmanuel Balestrero" by and the article "A Case of Identity" (, June 29, 1953) by .

For many years, it has remained one of Hitchcock's least famous films. However it has had a significant influence on many directors. "The Wrong Man" provoked the longest piece of criticism written by . ["Godard on Godard", translated by Tom Milne, Da Capo Press) in his years as a critic; and in "Scorsese on Scorsese"(edited by Ian Christie and David Thompson), it is cited as an influence on .]

The film examines the life of Manny Balestrero (Henry Fonda), who works as a musician in the in New York. He and his wife have very little money.

Thus, when his wife needs some dental work, Manny attempts to borrow on her policy at the insurance office.

Unfortunately for him, he closely physically resembles an armed robber who held up the office twice before, so the police are called. Manny is arrested and charged with the crime.

Manny is identified by several witnesses, and he nervously misspells a word in the same way as the word appeared on the robbery note.

We see his travels through the criminal justice system through fingerprinting, line-up, arraignment and so forth.

His defense is that of mistaken identity. He had a swollen jaw during the time of the first hold-up, which the teller never reported but which she would have seen had Manny been the robber. He had played cards throughout the day of the second hold-up, but his alibi defense takes a serious hit when it turns out that his card partner died of natural causes.

Midway through the trial, a juror makes a remark which prompts the judge to grant a mistrial.

The stress of all this has a devastating effect on his wife, who slowly seeps down into depression, to the point where she is institutionalized.

While awaiting re-trial, the real robber is arrested while trying to hold-up another store. Manny is exonerated.

The movie ends with Manny's wife not responding to him from her semi-comatose state, but in a postlogue it is revealed that she recovered later and that the family moved to Florida.

In real life, the defense attorney at the trial was Frank O'Connor (1909-1992). A state senator at the time of the trial, O'Connor went on to become district attornery of Queens County (Queens, New York City), president of the New York City Council, and an appellate court judge. (Obituary, New York Times Dec. 3, 1992)

Alfred Hitchcock's cameo is a signature occurrence in most of his films. In "The Wrong Man" he can be seen (at the beginning of the film) in silhouette standing in a darkened street as he advises the audience the film is a true story. The prison scenes were filmed in a real prison. When Manny (Henry Fonda) is taken to his cell, one of the actual inmates shouts 'What'd they get ya for, Henry?'.

The film was scored by , who wrote the music for all of Hitchcock's films from "" (1955) through "" (1964) with the exception of "The Birds", in which Herrmann used only electronic sounds. It is one of the most subdued scores Herrmann ever wrote and one of the few he composed with some jazz elements, primarily to represent Fonda's appearance as a musician in the nightclub scenes.

It was the final film that Hitchcock made for , completing a contract commitment that had begun with two films produced for Transatlantic Pictures and released by Warners in the late 1940s, "" and "" (his first two films in ). After "The Wrong Man," Hitchcock resumed his work at until he moved to for the remainder of his career. He also made a single film for : "" (1959) - that film has since passed on to WB.