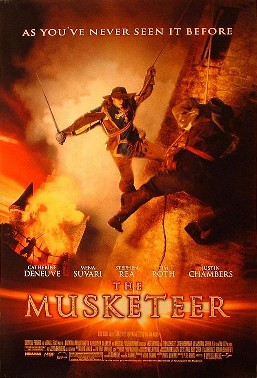 The film is notable for eschewing in its action sequences, for Hong Kong film-style martial arts choreography and wirework. This movie even has 's regular actor as a stunt choreographer. [http://www.imdb.com/name/nm0944578/]

The film enjoyed a commercial success in the . This film topped the US upon its release in , and went on grossing $27 million in US . [http://www.boxofficemojo.com/movies/?page=weekend&id=musketeer.htm] Since and only paid $7.5 million to buy the and distribution rights of this film [http://www.filmstew.com/showArticle.aspx?ContentID=1548] , this film was very profitable for those two studios.