St. Nicholas' Church (Estonian: Niguliste kirik) is a medieval church in Tallinn, Estonia. It is dedicated to Saint Nicholas, the patron of the fishermen and sailors. Originally built in the 13th century, it was partially destroyed in Soviet Bombing of Tallinn in World War II. After restoration it is in use as an art museum and concert hall.[1] 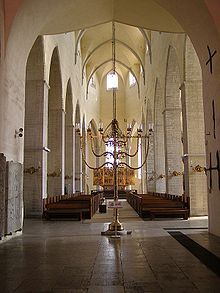 The church was founded and built around 1230–1275 by Westphalian merchants, who came from Gotland in the 13th century.[2] While the city was still unfortified, the church had heavy bars for closing the entrances, loopholes and hiding places for refugees. When the fortifications around Tallinn were finished in the 14th century (the town wall enclosed the church and the settlement in 1310[3]), the St. Nicholas' Church lost its defensive function and became a typical medieval parish church.[1] There are only a few parts of the original church that have been preserved through the present.

In 1405–1420 St. Nicholas' church obtained its current appearance, when the central aisle was built higher than side aisles and the church was redesigned as a full basilica. In 1515 the tower was built higher and covered with late-Gothic spire.[2] In late 17th century the tower was strengthened and secured. The spire was replaced with a Baroque spire with airy galleries, which was raised higher stage by stage through several centuries.[1] The tower is now 105 metres (344.5 ft) high.

Saint Nicholas was the only church in Tallinn which remained untouched by iconoclasm brought by the Protestant Reformation in 1523 (or 1524[4]). The head of the congregation poured molten lead into the locks of the church, and the raging hordes could not get in.[5]

On March 9, 1944, the church was severely damaged by Soviet Bombing of Tallinn in World War II. The resulting fire turned the church into ruins and destroyed most of its interior (except that of the St. Anthony chapel), including baroque pews, lofts and pulpit. The tower continued to smoke for about a month. Most precious art treasures survived thanks to their timely evacuation from the church. The renovation of the church started in 1953 and was completely finished in 1981.[3]

The church tower was again damaged by a fire on October 12, 1982.[5] The tower was burnt out and spire destroyed, roofs of the nave and the chapel of St. Anthony damaged.[3]

After restoration the church was inaugurated in 1984 as a museum-concert hall, where the collection of medieval art of the Art Museum of Estonia is displayed. Due to its excellent acoustics, the church is very popular concert hall.[1][5]

Artworks in the church

Most famous of the artworks is a painting Danse Macabre (Dance of Death) by the Lübeck master Bernt Notke, which depicts the transience of life, the skeletal figures of Death taking along the mighty as well as the feeble ones. Only the initial fragment of the original 30 metres (98.4 ft) wide painting (accomplished at the end of the 15th century) can be seen in the St Nicholas' Church.[1][6]

The High Altar of the St Nicholas' Church was made between 1478–1481 in the workshop of Herman Rode, master from Lübeck. Paintings on the outer flanks of this double-winged altar depict the life of Saint Nicholas, the central part and the unfolded wings expose over thirty wooden sculptures forming the so-called gallery of saints.[1]

The exposition contains also the Altar of St. Mary from 1500; the Altar of the Holy Kin from about 1490, made at Jan Borman’s workshop in Brussels; The Altar of Christ's Passion was made at the beginning of the 16th century by the Brugge master Adrian Isenbrandt at the order of the powerful Brotherhood of the Blackheads Guild, it was later complemented by Michel Sittow, a Tallinn artist.[1][4] 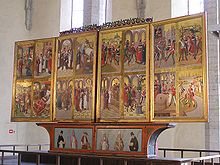 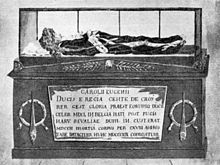 The side chapel was used to hold the mummy of Duke Charles Eugène de Croÿ, the commander of the Russian army at Battle of Narva (1700), taken prisoner by Swedish King Charles XII. Charles Eugène de Croÿ died in 1703 and was left unburied as nobody was willing to pay for the funeral. The air conditions in the chapel where the body was held protected the corpse from decaying and it became an attraction, remaining on display until 1897 when the authorities finally buried it.[4]