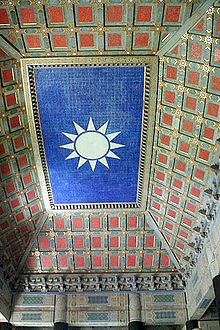 Ceiling of the sacrificial hall, displaying the flag of Kuomintang

Dr. Sun Yat-sen's Mausoleum (中山陵) is situated at the foot of the second peak of Mount Zijin (Purple Mountain) in Nanjing, China. Construction of the tomb started in January 1926 and was finished in spring of 1929. The architect was Lu Yanzhi, who died shortly after it was finished.

Dr. Sun was born in Guangdong province of China on November 12, 1866, and died in 1925 in Beijing, China. On April 23, 1929, the Chinese government appointed He Yingqin to be in charge of laying Dr. Sun to rest. On May 26, the coffin departed from Beijing, and on May 28, it arrived in Nanjing. On June 1, 1929, Dr. Sun was buried there. Sun, considered to be the "Father of Modern China" both in mainland China and in Taiwan, fought against the imperial Qing government and after the 1911 revolution ended the monarchy and founded the Republic of China.

Selection of the design

A committee decided to host a design competition for the plans for the Sun Yat-sen Mausoleum. The committee published advertisements in newspapers on May 5, 1925, inviting architects and designers within China and abroad to send plans. In exchange for a ten yuan charge, the committee would provide the designer with twelve pictures of the site.

The design would have to adhere to guidelines. It had to be done according to an ancient Chinese style, it had to have special and memorial substance, and it had to evoke the Chinese architectural spirit and add creativity. Designers were asked to keep the proposed construction costs within 300,000 yuan. Over 40 proposals were received.

On September 20, 1925, the committee convened in Shanghai and unanimously selected Lu Yanzhi's proposal.

Reclining on a mountain slope, the majestic mausoleum blends the styles of traditional imperial tombs and modern architecture. Lying at the mountainside, the vault is more than 700 hundred meters away from the paifang on the square below, which is the entrance of the mausoleum. There is a three-tier stone stand on which a huge bronze ding, an ancient Chinese vessel symbolizing power, perches. To the north of the square, the paifang towers high. Beyond is the 480-meter-long and 50-meter-wide stairway which has 392 stairs leading to the vault. On both sides, pine, cypress, and ginkgo trees guard the way. At the end of the stairway is a gate which is 16 meters high and 27 meters wide. The tri-arched marble gate is inscribed with four Chinese characters written by Dr. Sun, "Tian Xia Wei Gong" which means "What is under heaven is for all". Inside the gate, there is a pavilion in which a 9-meter-high stele is set, which is a memorial monument set by the Kuomintang (KMT). A few stairs up is the sacrificial hall and the vault.

In front of the sacrificial hall there stands a pair of huabiao, ancient Chinese ornamental columns, which are 12.6 meters high. The sacrificial hall is actually a palace of 30 meters in length, 25 meters in width and 29 meters in height. In the center of the hall a 4.6-meter-high statue of Dr. Sun sits. The statue was sculptured out of Italian white marble. The hall's ceiling features the flag of the Kuomintang. Biographical information on Dr. Sun is available to visitors in the hall. North of the hall lies the bell-shaped vault, wherein lies the sarcophagus of Dr. Sun.

On 27 April 2005: then-Kuomintang (KMT) Chairman Lien Chan, his wife, and other KMT members visited the Mausoleum. It was the first visit of KMT members to the site since 1949.

On 15 November 2006 another visit was made to the Mausoleum by Dr. Sun's granddaughter, Sun Huiying, who was by then over eighty years old.

In May 2008, Wu Po-hsiung became the first ruling Kuomintang chairman to visit the Sun Yat-sen Mausoleum since 1949. There were concerns that the 392 steps leading to the tomb would be too taxing given Wu's leg injuries.