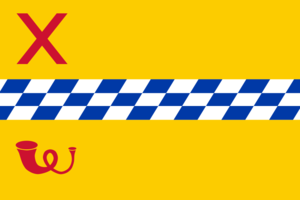 The river Oude Rijn used to flow through the city center of Woerden, but in 1960 the old river was diverted around the city center. The city has a long and rich history in making and trading; for years Gouda cheese for domestic and international use has been produced in this region. Woerden still has his authentic (since 1885) cheese market at the market place in its city center .

Woerden is situated on the river Oude Rijn, near the confluence with the former stream. The lower stretch of the Linschoten stream from and to Woerden silted up a long time ago and its flow was diverted through the Lek and rivers, but at one time it was an important branch of the delta, connecting the Lower Rhine from to the Oude Rijn near Woerden. Near the former confluence was an area that was slightly more elevated than the surroundings, a natural levee, which -in an area that is prone to flooding- made it an attractive location for settlement.

Here, at the highest spot, the Romans built a ("Castellum Laurum"), as part of the of the and thus part of the defense lines of the northern border of the Roman Empire. The first castellum was built in the 40s , and was destroyed in 69 AD during the . In 70 AD the castellum was rebuilt, and the Romans remained until 402 AD, with an interruption lasting from about 275-300 AD.

The Castellum was located at the present site of the medieval Petruschurch and surrounding church yard. During construction work on a new underground parking facility in the city center of Woerden, the remains of numerous old Roman buildings and a Roman cargo ship were found. During field research, a lot became known about the Roman time in Woerden: the location of the castellum, the zone of defense waters with the entrance road and the remains of a Roman cargo ship. [ [http://www.woerden7.nl/ Roman cargo ship] nl icon]

Little is known about the period after the Romans left for good in 402 AD. It may be assumed that people continued to live here, but there is no archeological evidence. The area was contested between ns and . Frankish King conquered the area around 630, and a small church was built in nearby Utrecht. Around 650 the Frisians came back, destroyed the Frankish church in Utrecht, and the Frisian king established his court there. Then, in 689 king Redbad was defeated by Frankish Duke in the battle of and the Franks regained control of the area. King Redbad reconquered Utrecht after Pippin died in 714, but the Frisian victory was shortlived: Duke defeated Redbad in 718. In 734 Charles Martel went on to vanquish the Frisians, in the .

The followed in the footsteps of the Frankish conquerors: In 695 AD Willibrord, known as the "Apostle to the " became Bishop of Utrecht, with interruptions due to Frisian incursions. Boniface worked here from 719-722. Liudger reports that Boniface preached in "Wyrda", referring to "Wierde", meaning that the place was on higher ground in the area. Around 850 the Bishop had to leave once more, this time because of marauders. Bishop returned to Utrecht in 918, after the Viking threat subsided. The Bishop claims Woerden as part of his jurisdiction: In a list prepared between 918 and 948 it is mentioned that _la. "In UUrdin totum Sancti Martini", [ [http://www.hetutrechtsarchief.nl/thema/tijdbalk/0914 "In UUrdin totum Sancti Martini"] ] meaning: In Woerden everything belongs to Saint Martin, i.e. the church in Utrecht.

Between Bishop and Count

The Bishop of Utrecht received land grants, first from the Frankish kings, and later from the Kings of Germany, in particular . In 1024 AD the bishops were made Princes of the and the new was formed.

Around 1000 AD settlement was limited to the river banks; further inland were undeveloped bogs. The bishops used their new authority to stimulate reclamation of this wilderness. Concessions were granted to settlers, who drained the bogs by digging dividing ditches beginning from rivers and streams and stretching about ¾ mile inland, thus creating the characteristic grid of fields still seen today. By about 1300 AD the reclamation process had been completed. In the mean time a competing realm had developed to the west, along the coast. First known as West Frisia it became known as when moved his court to in 1101. The Counts of Holland expanded their influence, and by 1165 they built a fort called Svadeburg, near present day , about 7 miles to the west of Woerden. Around 1160 Bishop built a in Woerden. Once more Woerden became a border town between two belligerent powers, a situation that lasted until 1527 when the sold his territories to Emperor Charles V and the two statelets were united under Charles' rule. Due to its strategic location on the border between the and the of Utrecht, various wars have been fought in and around Woerden by the various lords and ladies of these realms.

From about 1131-1296 the Van Woerden family dominated local affairs in Woerden. Several scions of the family are known as "Herman van Woerden". Originally they were stewards of the castle for the Bishop, but in time they sought to become independent. In 1274 formed an alliance with , and revolted against bishop-elect . In 1278 intervened on the side of the much weakened bishop, and defeated the rebellious lords. Gijsbrecht was taken prisoner, and Herman went into exile. In 1281 Floris V was awarded the lands of the rebellious lords, including Amsterdam and Woerden. In a 1288 peace agreement Floris restored the Lordship of Woerden to Herman van Woerden, but now as a had the castle of Woerden constructed, and in 1510 the city hall was built. These buildings still exist, although the castle was extensively altered and renovated through the years.

On November 1, 1425 Woerden chose the side of in the conflict with Jacoba van Beieren, after Philip confirmed the and promised that the Lordship of Woerden would never be separated from the County of Holland by awarding it to someone else. During the reign of the , Philip the Good (1419&ndash;1467) and (1467&ndash;1477) Woerden enjoyed an unprecedented period of peace, and by 1477 its population had almost tripled to about 1920. Charles the Bold's death before the gates of was the prelude to renewed unrest, both with Utrecht and the duchy of , and the town suffered economic hardship because of it.

The reign of Charles V was a period of relative peace and prosperity for Woerden, despite religious unrest. In April 1522 Charles V introduced the in the .

Johannes Pistorius Woerdensis (), a catholic priest, was the first preacher in the Northern Netherlands to be ed as a direct result of his religious beliefs. His father was a sexton in Woerden and also tenant of the , and his surname was derived from that profession.

Jan de Bakker was a pupil of (Hinne Rode), headmaster of St. School of the in Utrecht. Rode was a proponent of ism, and in 1520 his father called Jan back to Woerden, perhaps out of concern about those heretic views. Jan transferred to Leuven, and in 1522 completed his education there. He returned to Woerden, was ordained in Utrecht as priest, and assisted his father as sexton and deacon.

Jan started to spread the heretic views, and in May 1523 he and another priest were arrested by the stewart of the castle. After a short while they were released, and it is thought that the two travelled to , but there is no evidence he met with . After he returned he continued his preachings, and the conflict with the was further aggravated by the fact that he broke his , and got married. In the night of May 9, 1525 he was arrested and the next day transferred to , where he appeared before the Inquisition. He was defrocked and sentenced to death, and on September 15 1525 in . His widow saved her live by recanting the heresies, and lived out her live in an .The city magistrates of Woerden were tolerant towards the Lutheran confession. In 1566 this resulted in a confrontation with duke Eric of Brunswick, who was Lord of Woerden at that time. Although Eric of Brunswick (1528 - 1584) was raised Lutheran he converted to Catholicism in 1547, much to the regret of his mother . Eric served as commanding officer in the armies of Charles V and Philip II, and fought on their side in the (1546-1547) and the Franco-Habsburg War (1551–1559). During the he distinguished himself by taking French Marshals and prisoner. These prisoners were very important to Philip II as bargaining chip during negotiations for the peace Treaty of Cateau-Cambrésis. In 1558 Philip II granted Eric of Brunswick the Lordship of Woerden as compensation, over the objection of the city magistrates of Woerden who felt that this was an infringement of promises made by in 1425.

Duke Eric was also instrumental in suppressing the ill-fated rebellion of , Lord of . After the rebel army was defeated in the (March 13, 1567) Eric of Brunswick captured Vianen on May 5, 1567.