Antoine-Laurent de Lavoisier (also Antoine Lavoisier after the French Revolution; 26 August 1743 – 8 May 1794; French pronunciation: [ɑ̃twan lɔʁɑ̃ də lavwazje]), the "father of modern chemistry",[1] was a French nobleman prominent in the histories of chemistry and biology.[2] He found and termed both oxygen (1778) and hydrogen (1783), helped construct the metric system, put together the first extensive list of elements, and helped to reform chemical nomenclature. He was also the first to establish that sulfur was an element (1777) rather than a compound.[3] He discovered that, although matter may change its form or shape, its mass always remains the same.

He was an administrator of the "Ferme Générale" and a powerful member of a number of other aristocratic councils. All of these political and economic activities enabled him to fund his scientific research. At the height of the French Revolution he was accused by Jean-Paul Marat of selling watered-down tobacco, and of other crimes, and was guillotined.[4][5] 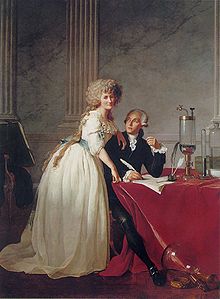 Portrait of Antoine-Laurent Lavoisier and his wife by Jacques-Louis David, ca. 1788

Born to a wealthy family in Paris, Antoine Laurent Lavoisier inherited a large fortune at the age of five with the passing of his mother.[6] He was educated at the Collège des Quatre-Nations (also known as Collège Mazarin) from 1754 to 1761, studying chemistry, botany, astronomy, and mathematics. He was expected to follow in his father's footsteps and even obtained his license to practice law in 1764 before turning to a life of science. His education was filled with the ideals of the French Enlightenment of the time, and he was fascinated by Pierre Macquer's dictionary of chemistry. He attended lectures in the natural sciences. Lavoisier's devotion and passion for chemistry was largely influenced by Étienne Condillac, a prominent French scholar of the 18th century. His first chemical publication appeared in 1764. From 1763 to 1767 he studied geology under Jean-Étienne Guettard. In collaboration with Guettard, Lavoisier worked on a geological survey of Alsace-Lorraine in June 1767. At the age of 25, he was elected a member of the French Academy of Sciences, France's most elite scientific society, for an essay on street lighting, and in recognition for his earlier research. In 1769, he worked on the first geological map of France.

In 1771, at the age of 28, Lavoisier married 13-year-old Marie-Anne Pierrette Paulze, the daughter of a co-owner of the Ferme générale. Over time, she proved to be a scientific colleague to her husband. She translated documents from English for him, including Richard Kirwan's Essay on Phlogiston and Joseph Priestley's research. She created many sketches and carved engravings of the laboratory instruments used by Lavoisier and his colleagues. She edited and published Lavoisier’s memoirs (whether any English translations of those memoirs have survived is unknown as of today) and hosted parties at which eminent scientists discussed ideas and problems related to chemistry.[7]

Research on gases, water, and combustion 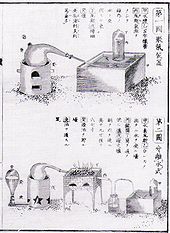 The work of Lavoisier was translated in Japan in the 1840s, through the process of Rangaku. Page from Udagawa Yōan's 1840 Seimi Kaisō

Lavoisier demonstrated the role of oxygen in the rusting of metal, as well as oxygen's role in animal and plant respiration. Working with Pierre-Simon Laplace, Lavoisier conducted experiments that showed that respiration was essentially a slow combustion of organic material using inhaled oxygen. Lavoisier's explanation of combustion disproved the phlogiston theory, which postulated that materials released a substance called phlogiston when they burned.

Lavoisier discovered that Henry Cavendish's "inflammable air", which Lavoisier had termed hydrogen (Greek for "water-former"), combined with oxygen to produce a dew which, as Joseph Priestley had reported, appeared to be water. In "Mémoire sur la combustion en général" ("On Combustion in General," 1777) and "Considérations générales sur la nature des acides" ("General Considerations on the Nature of Acids," 1778), he demonstrated that the "air" responsible for combustion was also the source of acidity. In 1779, he named this part of the air "oxygen" (Greek for "becoming sharp" because he claimed that the sharp taste of acids came from oxygen), and the other "azote" (Greek "no life"). In "Réflexions sur le phlogistique" ("Reflections on Phlogiston," 1783), Lavoisier showed the phlogiston theory to be inconsistent. But Priestley refused to believe Lavoisier's results before his death.

Lavoisier's researches included some of the first truly quantitative chemical experiments. He carefully weighed the reactants and products in a chemical reaction, which was a crucial step in the advancement of chemistry. He showed that, although matter can change its state in a chemical reaction, the total mass of matter is the same at the end as at the beginning of every chemical change. Thus, for instance, if water is heated to steam, if salt is dissolved in water or if a piece of wood is burned to ashes, the total mass remains unchanged. His experiments supported the law of conservation of mass, which Lavoisier was the first to state,[2] although Mikhail Lomonosov (1711–1765) had previously expressed similar ideas in 1748 and proved them in experiments. Others who anticipated the work of Lavoisier include Jean Rey (1583–1645), Joseph Black (1728–1799), and Henry Cavendish (1731–1810).

Lavoisier investigated the composition of water and air, which at the time were considered elements. He determined that the components of water were oxygen and hydrogen, and that air was a mixture of gases, primarily nitrogen and oxygen. With the French chemists Claude-Louis Berthollet, Antoine Fourcroy and Guyton de Morveau, Lavoisier devised a systematic chemical nomenclature. He described it in Méthode de nomenclature chimique (Method of Chemical Nomenclature, 1787). This system facilitated communication of discoveries between chemists of different backgrounds and is still largely in use today, including names such as sulfuric acid, sulfates, and sulfites.

Lavoisier's Traité élémentaire de chimie (Elementary Treatise on Chemistry, 1789, translated into English by Scotsman Robert Kerr) is considered to be the first modern chemistry textbook. It presented a unified view of new theories of chemistry, contained a clear statement of the law of conservation of mass, and denied the existence of phlogiston. This text clarified the concept of an element as a substance that could not be broken down by any known method of chemical analysis, and presented Lavoisier's theory of the formation of chemical compounds from elements.

Combustion generated by focusing sunlight over flammable materials using lenses, an experiment conducted by Lavoisier in the 1770s 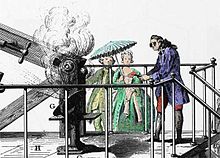 Detail of picture of a combustion experiment

Lavoisier's fundamental contributions to chemistry were a result of a conscious effort to fit all experiments into the framework of a single theory. He established the consistent use of the chemical balance, used oxygen to overthrow the phlogiston theory, and developed a new system of chemical nomenclature which held that oxygen was an essential constituent of all acids (which later turned out to be erroneous). Lavoisier also did early research in physical chemistry and thermodynamics in joint experiments with Laplace. They used a calorimeter to estimate the heat evolved per unit of carbon dioxide produced, eventually finding the same ratio for a flame and animals, indicating that animals produced energy by a type of combustion reaction.

Lavoisier also contributed to early ideas on composition and chemical changes by stating the radical theory, believing that radicals, which function as a single group in a chemical process, combine with oxygen in reactions. He also introduced the possibility of allotropy in chemical elements when he discovered that diamond is a crystalline form of carbon.

However, much to his professional detriment, Lavoisier discovered no new substances, devised no really novel apparatus, and worked out no improved methods of preparation. He was essentially a theorist, and his great merit lay in the capacity of taking over experimental work that others had carried out—without always adequately recognizing their claims—and by a rigorous logical procedure, reinforced by his own quantitative experiments, of expounding the true explanation of the results. He completed the work of Black, Priestley and Cavendish, and gave a correct explanation of their experiments.

Overall, his contributions are considered the most important in advancing chemistry to the level reached in physics and mathematics during the 18th century.[9]

Lavoisier conducting an experiment on respiration in the 1770s

Lavoisier used a calorimeter to measure heat production as a result of respiration in a guinea pig. The outer shell of the calorimeter was packed with snow, which melted to maintain a constant temperature of 0 °C around an inner shell filled with ice. The guinea pig in the center of the chamber produced heat which melted the ice. The water that flowed out of the calorimeter was collected and weighed. Lavoisier used this measurement to estimate the heat produced by the guinea pig's metabolism. Lavoisier concluded, "la respiration est donc une combustion," That is, respiratory gas exchange is a combustion, like that of a candle burning.[10]

Lavoisier received a law degree and was admitted to the bar, but never practiced as a lawyer. He did become interested in French politics, and at the age of 26 he obtained a position as a tax collector in the Ferme Générale, a tax farming company, where he attempted to introduce reforms in the French monetary and taxation system to help the peasants. While in government work, he helped develop the metric system to secure uniformity of weights and measures throughout France.

He was a powerful figure in the deeply unpopular Ferme Générale, 28 feudal tax collectors who were known to profit immensely by exploiting their position. Lavoisier was branded a traitor by the Assembly under Robespierre, during the Reign of Terror, in 1794. He had also intervened on behalf of a number of foreign-born scientists including mathematician Joseph Louis Lagrange, granting them exception to a mandate stripping all foreigners of possessions and freedom.[11] Lavoisier was tried, convicted, and guillotined on 8 May in Paris, at the age of 50.

Lavoisier was actually one of the few liberals in his position. One of his actions that may have sealed his fate (although all tax collectors were executed during the revolution) was a clash a few years earlier with the young Jean-Paul Marat[original research?] whom he dismissed curtly after being presented with a preposterous "scientific invention" (an object which showed a spectrum of light that was as yet unseen — but did not measure anything).[citation needed] Marat subsequently became a leading agitator for the extension of the revolutions gains to the 'sans-cullottes' and a Jacobin.

According to a (probably apocryphal) story, the appeal to spare his life so that he could continue his experiments was cut short by the judge: "La République n'a pas besoin de savants ni de chimistes ; le cours de la justice ne peut être suspendu." ("The Republic needs neither scientists nor chemists; the course of justice cannot be delayed".)[12]

Lavoisier's importance to science was expressed by Lagrange who lamented the beheading by saying: "Cela leur a pris seulement un instant pour lui couper la tête, mais la France pourrait ne pas en produire une autre pareille en un siècle." ("It took them only an instant to cut off his head, but France may not produce another such head in a century.")[13][14]

One and a half years following his death, Lavoisier was exonerated by the French government. When his private belongings were delivered to his widow, a brief note was included reading "To the widow of Lavoisier, who was falsely convicted."

About a century after his death, a statue of Lavoisier was erected in Paris. It was later discovered that the sculptor had not actually copied Lavoisier's head for the statue, but used a spare head of the Marquis de Condorcet, the Secretary of the Academy of Sciences during Lavoisier's last years. Lack of money prevented alterations being made. The statue was melted down during the Second World War and has not since been replaced. However, one of the main "lycées" (high schools) in Paris and a street in the 8th arrondissement are named after Lavoisier, and statues of him are found on the Hôtel de Ville (photograph, left) and on the façade of the Cour Napoléon of the Louvre.

Lavoisier, by Jacques-Léonard Maillet, ca 1853, among culture heroes in the Louvre's Cour Napoléon