: "The material from this article should be in and ." 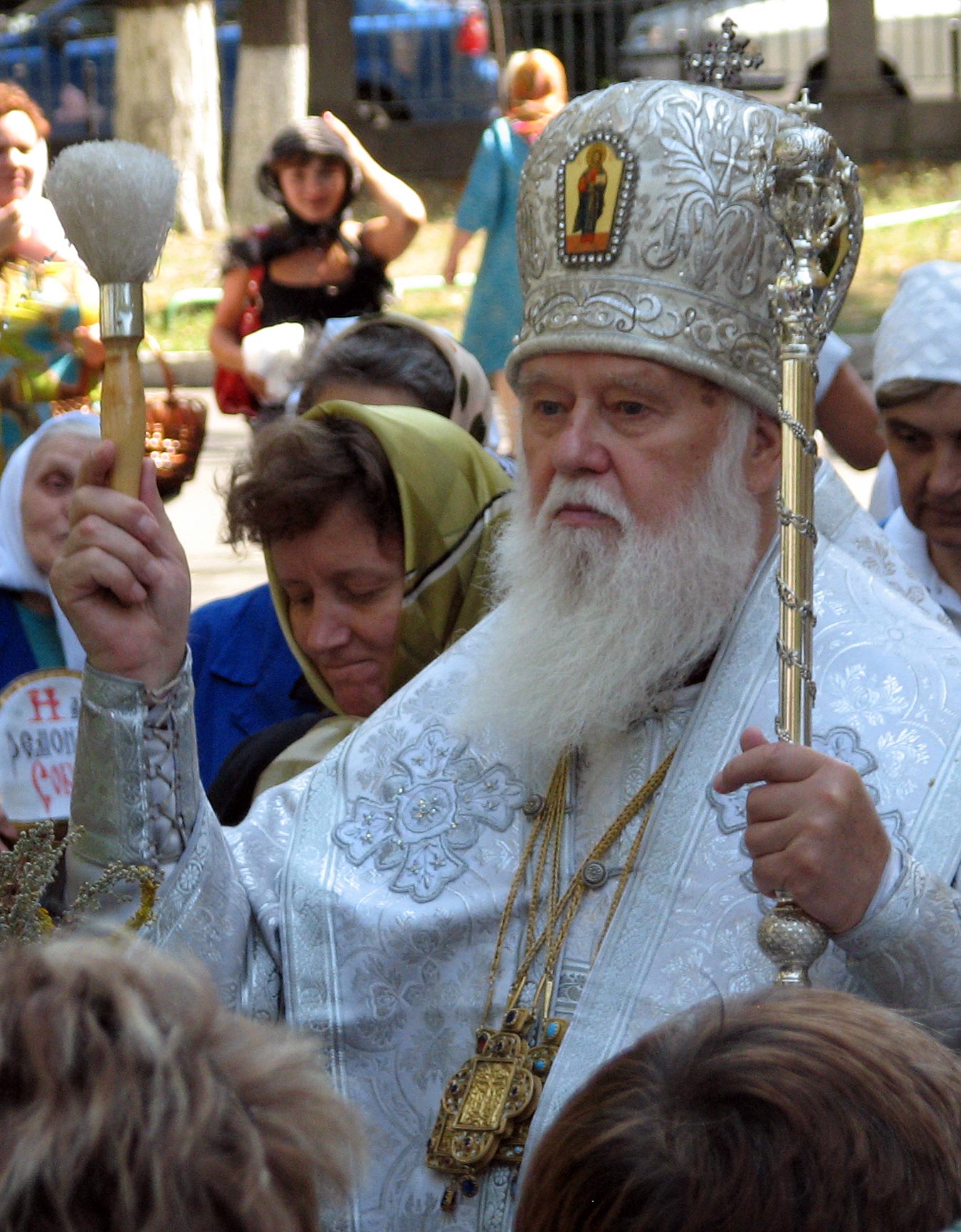 Patriarch Filaret, secular name Mykhailo Antonovych Denysenko, officially, ", the of and All Rus’ - Filaret", (born , ) is the head of the , one of two major Orthodox Churches in Ukraine. He was elected and enthroned as a UOC-KP leader in October, 1995.

Hierarch of the Russian Orthodox Church

From 1960 he was effectively in charge of the Ukrainian of the and served at in , the exharchate's mother cathedral.

In 1961 Filaret served in the mission of the Russian Orthodox Church to the . In January 1962 Filaret was elected Bishop of the Leningrad and, in February, he was ordained in Leningrad by Metropolitan Pimen (later ) and other bishops. After that, Filaret was appointed to several diplomatic missions of the Russian Orthodox Church and from 1962 to 1964 served as ROC Bishop of and . In 1964 he returned to as the Bishop of and Rector of Moscow Theological Academy and Seminary.

As a leader of the Russian Orthodox Church in , Filaret actively and publicly supported the suppression of Ukrainian churches that refused to associate with the ROC, the and the .

With the ailing physical condition of Pimen I, the Patriarch of Moscow and All Rus', Filaret personally oversaw the preparation and celebration of the anniversary in 1988. That celebration redefined the relationship between the state and the church, and was marked with the return of numerous church buildings to the ROC.

Upon the death of Patriarch Pimen I on May 3, 1990, Filaret was widely viewed as a front runner in the Russian Orthodox Church patriarchal election, especially when, with the election still pending, he became a patriarchal "".

However, Filaret lost the election on June 6, 1990 for the Patriarch of Moscow to Metropolitan Alexius (Alexey Ridiger) of Leningrad and (who became enthroned as ).

In October 1990, Filaret's Metropolitan chair was renamed to Metropolitan of Kiev and All Ukraine, the Ukrainian Orthodox Church was granted official autonomy, the status one step short of the full , under the .

Creation and leadership of the Ukrainian Orthodox Church - Kiev Patriarchate

Filaret initiated the creation of a new Ukrainian Church through the separation of the ROC's Ukrainian Metropolitan's see from the Moscow Patriarchate. The creation of the new church was proclaimed on June 25, 1992 under the name of the "" via unilateral changing of the ecclesiastical link from the to the , another recently revived church in Ukraine, however with no clear standing within the . In addition to the lack of a proper procedure in the creation of the Church, its patriarchal status was simply assumed unilaterally as well.

With the support three bishops of the Ukrainian Autocephalous Orthodox Church Filaret entered into a short-lived union with the latter. Initially, he did not become the formal leader of the church, but became its de-facto ruler under the ailing Patriarch Mstyslav and, from 1993 Patriarch Volodymyr. In July 1995, upon the death of Patriarch Volodymyr, Filaret was elected head of the UOC-KP.

Patriarch Filaret currently leads the drive for his church to become a single Ukrainian national church. His attempts to gain a canonical recognition for his church remain unsuccessful to this day.

* Patriarch Filaret is alleged to have a (Yevgeniya Petrovna Rodionova) and children in contravention of his .