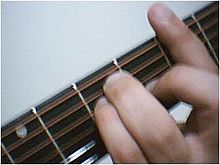 A barre chord ("E Major shape"), with the index finger used to bar the strings.

In music, a guitar chord is a chord, or collection of tones usually sounded together at once, played on a guitar. It can be composed of notes played on adjacent or separate strings or all the strings together. Chord voicings designed for the guitar can be optimized for many different purposes and playing styles.

The guitar is generally very capable and versatile for chording purposes, but it does exhibit some differences from other instruments. For a six string guitar in the very largest chord-voicings it may be necessary to drop or omit one or more tones from the chord; this is typically the root or fifth. The layout of notes on the fretboard sometimes demands that the notes in a chord will not run in tonal order. It can make a possible chord which is composed of more than one note of exactly the same pitch. Many chords can be played with the same notes in more than one place on the fretboard.

Guitars can vary both in the number of strings and in tuning. Most guitars used in popular music have six strings and are tuned (from the lowest pitched string to the highest): E-A-D-G-B-E. The internal intervals present among adjacent strings in this tuning can be written 5-5-5-4-5 (with perfect fourth intervals except for one major third interval between the G and the B). Conventionally, the string with the highest pitch (the thinnest) is called the first string, and the string having the lowest pitch is called the sixth.

Guitar chords take advantage of the intervals between the strings, which in each case are perfect fourths excepting the interval between the B (second) and G (third) strings, which is a major third. One common non-standard tuning, found in hard rock and heavy metal music, is called drop-D tuning. This requires the player to change the low E string tuning to that of a D note. This tuning allows power chords (see below) to be played relatively easily on the bottom three strings, as the strings are now tuned to a root-fifth-octave (D-A-D) tuning. Many other forms of guitar tunings exist as well.

CAGED is an acronym for the five easiest major chords to play.

In a similar way, the chords A Major, G Major, E Major and D Major are often played as:

These five chords are fundamental to guitar for a variety of reasons including:

B major and F major shapes

The two remaining whole tone major chords (to complete an octave) are those of B major and F major. These are commonly played as barre chords, with the first finger used to press down multiple strings across the guitar fingerboard.

Barre chords in the shape of A and E major can be played anywhere on the fretboard. Wherever they are played, these chords are major because they have the same shape, and this determines the intervals between the notes. The root of the chord in any position can be worked out from the diagrams above.

The other three shapes in the CAGED system are C major, G major and D major. These can be transformed into barre chords in a similar way to the A major and E major shapes.

The CAGED system therefore creates five major barre chords which can be used to play all the major chords in more than one position on the fretboard.

The CAGED system can be modified to produce many other chords, only some of which can be covered here.

These require the basic shape of the chord to be modified so that it has slightly different intervals between each note. Once this is done, the shape can be played anywhere on the fretboard, as above.

Minor chords (commonly notated as C-, Cm, Cmi or Cmin) are the same as major chords except that they have a minor third instead of a major third. This is a difference of one semitone.

To create F minor from the F major chord (in E major shape), the second finger should be lifted so that the third string plays onto the barre. Compare the F major to F minor:

The other shapes can be modified as well:

The C major and G major shapes cannot be modified in this way because the major third in those shapes falls on the bar (or nut). It is therefore impossible to lower that note by one semitone (to produce the minor third) and retain the barre. C minor and G minor therefore have to be played using one of the other CAGED shapes. 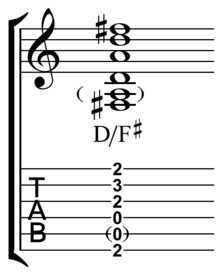 A chord is inverted when the bass note isn't the root note. For example, if the note E (the open sixth string) were to be played over the A minor chord (as in the table above), the chord would be [0 0 2 2 1 0]. This has the note E as its lowest tone instead of A. It is often written as Am/E, where the letter following the slash indicates the new bass note. However, in popular music it is usual to play inverted chords on the guitar when they are not part of the harmony, since the bass guitar can play the root pitch.

Seventh chords (notated by 7 or "maj7") are constructed by adding a fourth note to the major triad, which is a minor or major 7th above (i.e., a whole or half step below) the tonic. There are various types of seventh chords depending on the quality of the original chord and the quality of the seventh added. In fact, in many cases, the seventh chord is relatively easy to play, compared to the corresponding major chord. Some of these are based on the CAGED fingerings, and some are not. Below is a series of fret-number configurations for some common chords:

Other extended chords, such as ninths (9), elevenths (11) and thirteenths (13) can also be constructed. These can all be played with the CAGED shapes.

Power chords (sometimes notated as 5) consist solely of a root note and a fifth. Sometimes an octave is included as well.

On a guitar with six strings, it is possible to play any of five power chord shapes. Each can be played anywhere along the neck. The basic shapes are

There are many alternate tunings (like drop D tuning, for example). These change the way chords are played, making some chords easier to play while others may be more difficult. Also, guitars may be tuned to a chord so that a slide may be used to play the chord at a multitude of pitches.