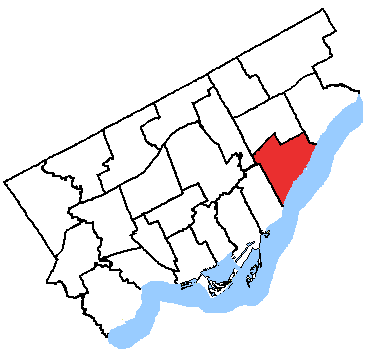 Scarborough Southwest is a federal and provincial electoral district in , , that has been represented in the and in the since 1999.

It covers the southwestern part of the Scarborough part of Toronto. It stretches from in the south to in the north.

It consists of the part of the City of Toronto bounded on the west by Victoria Park Avenue, on the south by Lake Ontario, and on the north and east by a line drawn from Victoria Park Avenue northeast along the hydroelectric transmission line situated north of Craigton Drive, south along the Canadian National Railway, east along Eglinton Avenue East, south along Bellamy Road South, southwest along Kingston Road, and southeast along Bellamy Ravine Creek.

The riding includes the neighbouhoods of , Oakridge, , , , , Golden Mile, and in Scarborough, Toronto.

The federal riding was created in 1996 from parts of and . It consisted initially of the part of the City of Scarborough lying south and west of a line drawn from the western city limit east along Eglinton Avenue East, north along Markham Road, east along the Canadian National Railway, southwest along Kingston Road, south along Scarborough Golf Club Road, southwest along Hill Crescent, southeast along Bellamy Ravine Creek.

In 2003, it was given its current boundaries as described above.

This riding has elected the following member of the :