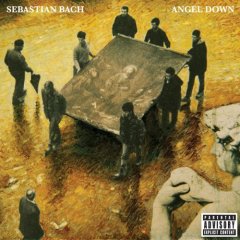 "Angel Down" is the third by former Skid Row singer , released on , . It is Bach's first solo album since his 2001 release "". It has garnered attention due to lead singer 's guest appearance on 3 tracks and Bach's appearance on MTV's . Rose's performances on the album were the first officially released material from the singer since the Guns N' Roses song "Oh My God" was featured on the soundtrack of the 1999 film "End of Days". The front cover art of the album is an original painting by Bach's late father .

In an exclusive preview of the album, Paul Cashmere of "Undercover" described "Angel Down" as "The metal album of the year, if not the 21st Century so far." [ [http://undercover.com.au/News-Story.aspx?id=3199 Exclusive Sneak Preview - Sebastian Bach: Angel Down] Paul Cashmere, Undercover, October 21, 2007]

On October 27, 2007, "" was played on the radio station "Q94.5". According to the station, the phones rang off the hook when the song was played and it became the station's #1 most requested track, however it only debuted at # 191 on the chart, selling 6,400 copies in its first week. The album seemed to have suffered from distribution problems in the first few weeks which explains the low sales,but has since gone on to sell over 100,000 world wide. [ [http://www.roadrunnerrecords.com/blabbermouth.net/news.aspx?mode=Article&newsitemID=83727] Blabbermouth.net, October 29, 2007]

* - Vocals on "Back in the Saddle", backup vocals on "(Love Is) A Bitchslap" and "Stuck Inside"; writing credits on "Stuck Inside".
*Adam Albright - Guitar on "Angel Down"
* - Piano and strings on "By Your side" and "Falling into You"