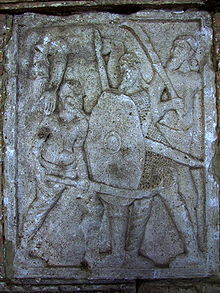 Falx is a Latin word originally meaning sickle, but was later used to mean any of a number of tools that had a curved blade that was sharp on the inside edge such as a scythe. Falx was also used to mean a weapon, particularly that of the Thracians and Dacians, and later a siege hook used by the Romans themselves. 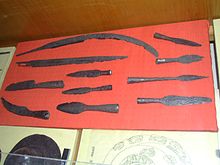 In Latin texts the weapon was described as an ensis falcatus (whence falcata) by Ovid in Metamorphose or falx supina by Juvenal in Satiriae.

The Dacian falx came in two sizes: one-handed and two-handed. The shorter variant was called sica[2] (sickle) in the Dacian language (Valerius Maximus, III,2.12) with a blade length that varied but usually around 16 inches (41 cm) long with a handle 1/3 longer than the blade. The two-handed falx was a pole-arm. It consisted of a 3 feet (0.91 m) long wooden shaft with a long curved iron blade of nearly-equal length attached to the end. Archaeological evidence indicates that the one-handed falx was also used two-handed.[3]

The blade was sharpened only on the inside, and was reputed to be devastatingly effective. However, it left its user vulnerable because, being a two-handed weapon, the warrior could not also make use of a shield. It may be imagined that the length of the two-handed falx allowed it to be wielded with great force, the point piercing helmets and the blade splitting shields - it was said to be capable of splitting a shield in two at a single blow. Alternatively, it might used as a hook, pulling away shields and cutting at vulnerable limbs.

Trajan's column is a monument to the emperor’s conquest of Dacia. The massive base is covered with reliefs of trophies of Dacian weapons and includes several illustrations of the two-handed falx. The column itself has a helical frieze that tells the story of the Dacian wars. On the frieze, almost all the Dacians that are armed, have shields and therefore cannot be using a two-handed falx. Unfortunately, the exact weapon of those few shown without shields cannot be determined with certainty. The frieze of Trajan's column also shows Dacians using a smaller, sword sized falx. However, this column is also largely stylised with the sculptor believed to have worked from Trajan's now lost commentary and likely did not witness the events himself. A further problem is that most of the weapons on the monument were made of metal which have since disappeared.[4]

The Adamclisi monument, built by Trajan to commemorate the Romans who lost their lives in the Dacian counter attack in Moesia, is thought to have been constructed by the soldiers who fought there so may be more accurate. This column shows four distinct types of falx whereas Trajans shows only one type that does not resemble any on the Adamclisi monument. Due to this, historians disagree on which depiction is correct but it has been pointed out that if the Trajans column falx is correct then there would have been no need to modify their armour.[5] Both columns show the Dacians fighting with no armour apart from a shield although some on the Adamclisi are wearing helmets. Some historians believe that armour was not depicted to differentiate Dacians from Romans as both used the same style shield and other sources indicate that Dacians by this time had undergone Romanisation, used Roman military tactics and sometimes wore Roman style scale armour. It is likely the nobles at least wore armour and, combined with the falx, the Dacians would have been a formidable threat.[6] 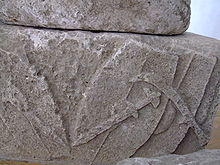 Detail of a falx on the Tropaeum Traiani trophy 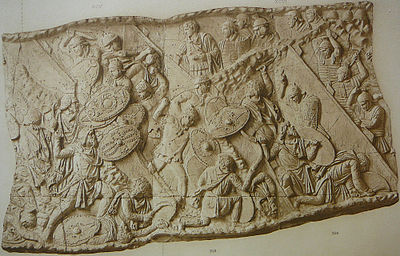 At the time of the Dacian wars researchers have estimated that only ten percent of Spanish and Gallic warriors had access to swords, usually the nobility. By contrast Dacia had rich resources of iron and were prolific metal workers. It is clear that a large percentage of Dacians owned swords, greatly reducing Rome's military advantage.[7]

Marcus Cornelius Fronto described the large gaping wounds that a falx inflicted, and experiments have shown that a blow from a falx easily penetrated the Romans' Lorica segmentata, incapacitating the majority of victims. These experiments also show that the falx was most efficient when targeting the head, shoulder, leg and especially the right (sword) arm, which was generally exposed. A legionary who had lost the use of his right arm became a serious liability to his unit in battle.[8]

The time of the conquest of Dacia by Trajan is the only known instance of the Roman army adapting personal equipment while on campaign, and it seems likely that this was a response to this deadly weapon. Roman legionaries had transverse reinforcing iron straps applied to their helmets - it is clear that these are late modifications because they are roughly applied across existing embossed decoration. The legions also reintroduced the wearing of Lorica hamata and Lorica squamata for the Dacia campaign as both were more flexible than the newer segmentata armour and were able to distribute damage more widely. In addition, both these older armour styles had unique modifications, a row of pteruges was added to the sleeves, a double row of pteruges was added to the skirt and a heavily padded vestment was worn underneath them. Roman armour of the time left limbs unprotected; Trajan introduced the use of greaves and an arm protector (manica) for the right arm, which had previously been used only by gladiators, and which was never used again by soldiers once the Dacia campaign concluded.[9][contradictory]

The Thracians also made use of the falx. They also used the rhomphaia, a weapon very similar to the two handed falx but much less drastically curved.

The two handed falx is clearly related to the Thracian rhomphaia. It is a derivative of both the sword and the spear, having evolved from a spear to a polearm before becoming more drastically curved to facilitate a superior cutting action. This drastic curve rendered the falx a purely offensive weapon to be used against a broken or routing force. Typically, an enemy would be broken by a sustained hail of missile fire from javelin, dart, bow, sling, and stone throwing troops before being chased down and cut to pieces by the falx wielders.

An atypical falx. The handle was usually longer than the blade.

The ancestor of the two handed falx may have been a farming implement used as an improvised weapon, in a manner analogous to the bill-gisarme. However, the scythe did not appear until the 12th and 13th centuries. The single-handed falx might have been inspired by the sickle, although agricultural sickles of the time were typically quite small—no more than 30 cm or so in length.

At the time of the Dacian wars, producing a long, sharp blade was technically challenging. As such, it might be that the larger two-handed falx was a high-status weapon and used only by the best warriors.