A mounting block, horse block, or in Scots a loupin'-on-stane[1] is an assistance for mounting and dismounting a horse or cart, especially for the young, elderly or infirm. They were especially useful for women riding sidesaddle, allowing a horse to be mounted without a loss of modesty. They were frequently located outside churches or kirks for the use of parishioners attending services, etc. In Yorkshire some were built at the top of steep lanes were the rider would remount after leading his horse up the slope.[2]

A modern mounting block, and cat for scale.

Mounting blocks today are primarily used by modern equestrians who are a) beginners b) people who have difficulty mounting (either a tall horse, a short person, or someone with some mobility impairments) and c) people who feel that use of a mounting block reduces strain on the spine of the horse, particularly at the withers. Modern mounting blocks are usually made of wood or of molded plastic.

Mounting blocks were usually made from stone or wood and prior to the era of the motor car they were very common. Some have three or more steps leading up to a platform which gave extra height and therefore easier access to the saddle and less chance of falling when dismounting.[3] A few had a wall or some other support to one side of the steps, as at Saint Boswells.[4] Some were built as memorials and bear inscriptions.[2] They were built with bricks, ashlar and even occasionally from a single stone block.[2]

A horse is best mounted using a mounting block because it is easier for the rider to mount the horse, it puts less strain on the stirrup leathers when mounting and it decreases the chances of the saddle slipping to one side when mounting, thereby reducing the chances of a fall and possible injury to the rider. A horse or pony should be mounted from the "near" side, that is the horse's left side.[5]

Decline in use of mounting blocks 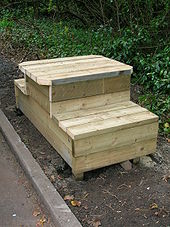 A mounting bock in a Country Park, Eglinton, Ayrshire.

Mounting blocks were a common feature up until the late 18th-century.[1] They are still used at equestrian centres,[5] but are no longer a common feature of inns, churches, farms, country houses, etc. in the United Kingdom, where they were once almost an obligatory feature.

The generally poor condition of roads up until the late 17th-century in Scotland for example, meant that most passenger transport by horse was literally on horseback. For instance, wheeled vehicles were practically unknown to farmers in Ayrshire until the end of the 17th century, and prior to this sledges were used to haul loads[6] as wheeled vehicles were useless. The roads had been mere tracks and such bridges as there were could only take pedestrians, men on horseback or pack-animals. The first recorded wheeled vehicles to be used in Ayrshire were carts offered gratis to labourers working on Riccarton Bridge, Kilmarnock, in 1726.

Once wheeled vehicles became commonplace the need for horse mounting blocks would have greatly decreased, thus mounting block as a permanent fixture went out with changing times. You didn't need one for getting into carriages, and thus as roads got better and fewer people rode, the need decreased. With the invention of the automobile, the need for the public mounting block vanished and they now are used exclusively by equestrians or retained as historic features at old inns, kirks, etc.[7][8]

In the 1860s, those mounting blocks that remained in London e.g. Bayswater, were thought of as quaint and old fashioned "in the true style of olden times".[9]

A Loupin' on stane poem

At Eskdalemuir in Dumfries and Galloway, the remains of a 'stone avenue' are known as the Loupin' Stanes due to the similarity with said structures.[10] The Wolfcleuchhead, 'Loupin' Stone', Mounting Steps or Mounting Block is in the parish of Roberton, Scottish Borders. This stone bears two carved heads and lettering; on the other the name 'Wolfcleuchead'.[11] These names have arisen either from the appearance or the actual re-use of these stones.

Examples and sites of mounting blocks

The Loupin'-on-stane & concavity at Kilmaurs 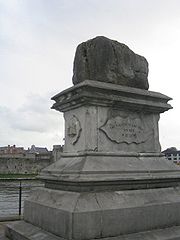 The Treaty Stone in Limerick stands on a pedestal 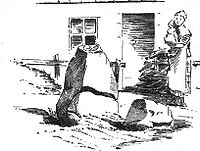