Austin Watson[1] (born September 4, 1986) is an American professional wrestler, better known by his ring name Consequences Creed. He is signed to WWE, and works in its developmental territory Florida Championship Wrestling as Xavier Woods. He was formerly one-half of the FCW Florida Tag Team Champions with Wes Brisco.[5]

He previously worked for Total Nonstop Action Wrestling, where he was a two-time World Tag Team Champion--once with Adam "Pacman" Jones and Ron "The Truth" Killings as Team Pacman, and once with Jay Lethal as Lethal Consequences. He has also worked for NWA Anarchy and other independent promotions under the ring name Austin Creed. His wrestling persona is based on Apollo Creed from the Rocky movie series.[6]

During his time in NWA Anarchy, Creed was part of a tag team called Awesome Attraction with Hayden Young. The pair had one of the longest title reigns in the promotion's history after defeating Justice Served (Jason Justice and Mike Free) in Cornelia, Georgia on April 7, 2007.[7] In 2006, Creed won NWA's Most Popular Wrestler, voted for by the NWA fans.

On July 12, 2007 Creed defeated Murder-One to become the first DSW Heavyweight Champion since the split from WWE. He also worked with The Assassin while in Deep South Wrestling.[6]

Creed appeared at Total Nonstop Action Wrestling's Bound For Glory pay-per-view event, teaming with Ron Killings as the replacement for Adam "Pacman" Jones. Creed wrestled under the name Rasheed Lucius "Consequences" Creed.[8] His union with Ron Killings was made to be a play on words, with Killings' nickname "The Truth" being combined with Creed's nickname "Consequences" to form Truth and Consequences, which is similar to the name of a town, (Truth or Consequences, New Mexico named for an old game show). 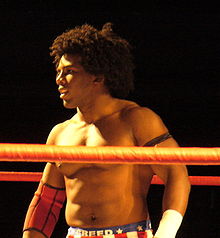 Creed in action in September 2008

On October 21, 2007, it was reported that Creed had signed a contract with TNA.[6] The signing was reported when Creed appeared on the radio show Trash Talking Radio on October 23 with Tommy Cairo and Sabian.[9] His signing was also confirmed later at a NWA Anarchy show where Creed was presented the contract by TNA Booking Director Bill Behrens.[10] Following Bound For Glory, Creed was not seen on TNA television for months after Killings asked and was later granted his release from the company.

On February 10, 2008, Creed wrestled in a dark match before Against All Odds. He teamed with Sonjay Dutt defeating The Rock 'n Rave Infection. On the March 13 edition of Impact! a promo video with the words "prepare to face the consequences" showed Creed training and announced that he would make his return at the Lockdown pay-per-view on April 13. The following week the return date was changed to April 10. On the April 10 edition of Impact!, Creed made his in-ring return and defeated Jimmy Rave of The Rock 'n Rave Infection, thus qualifying for the Xscape match at Lockdown.[11] During the match, Creed eliminated Shark Boy, but was later eliminated by Curry Man.[12] Creed would later wrestle in the first ever TerrorDome match at Sacrifice, which was won by Kaz.[13]

At Hard Justice, Creed faced Petey Williams for the TNA X Division Championship, but lost after interference from Sheik Abdul Bashir. On the September 4, 2008 edition of TNA Impact!, he won a number one contenders match against Bashir for the right to face Williams again at No Surrender for the X Division title.[14] The match was changed to a triple threat after Bashir repeatably attacked Creed. Bashir won the match and the X Division title.[15] 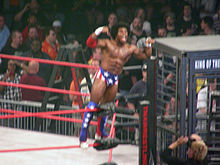 On the October 30, 2008, episode of Impact!, Creed, along with Samoa Joe, A.J. Styles, Jay Lethal, Petey Williams, Eric Young, ODB and The Motor City Machineguns formed a faction of younger wrestlers, known as The Frontline, to oppose The Main Event Mafia.[16]

On January 8, 2009, fellow Frontline member Lethal chose Creed to cash in his Feast or Fired briefcase with, and the pair won the TNA World Tag Team Championship from the champions Beer Money, Inc. (Robert Roode and James Storm). Creed and Lethal went on to be named Lethal Consequences, a combination of their respective names.[17] Beer Money, Inc. regained their titles in a three-way match just three days later at Genesis. For the next few months, Creed and Lethal teamed with the Motor City Machineguns to try and unmask Suicide. On the October 1, 2009 episode of Impact!, Creed and Lethal were part of a 5-man ladder match for a future X Division title match. During the match, Amazing Red, who ended up winning the match, performed a hurricanrana driver, which caused Creed to projectile vomit as his head hit the mat.[18] Watson was released from TNA on March 29, 2010.[19]

On April 4 New Japan Pro Wrestling announced Watson, using his Consequences Creed ring name, as a participant in the first Super J Tag Tournament.[20] On May 8 Creed and his partner Kota Ibushi were eliminated from the tournament in the first round by the team of Gedo and KUSHIDA.[21] Creed returned to New Japan on June 28, 2010, teaming up with IWGP Heavyweight Champion Togi Makabe and Tomoaki Honma in the J Sports Crown 6 Man Openweight Tag Team Tournament.[22] After defeating Tamon Honda, Kentaro Shiga and Makoto Hashi in the opening round, the trio was eliminated from the tournament in the second round by Shinsuke Nakamura, Masato Tanaka and Tomohiro Ishii.[22][23] On July 10 Creed defeated Brian Milonas, U–Gene and Tommaso Ciampa to win East Coast Wrestling Association's 2010 Super 8 Tournament.[24][25][unreliable source?]

On July 22, 2010, it was announced that Watson had signed a developmental contract with World Wrestling Entertainment.[26] Watson, using his real name, made his debut for WWE's developmental territory Florida Championship Wrestling on July 29 in a tag team match, where he and Percy Watson were defeated by Brodus Clay and Donny Marlow.[2] He has since been added to the company's official website under the name Xavier Woods.[3] On November 4, Woods teamed with Wes Brisco to win the FCW Florida Tag Team Championship by defeating Johnny Curtis and Derrick Bateman.[5] On December 1 Woods and Brisco vacated the Tag Team Championship, after Brisco was sidelined with an injury.[27][28] 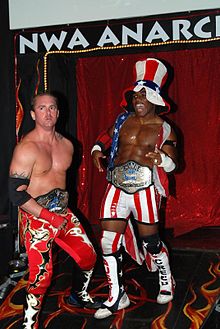 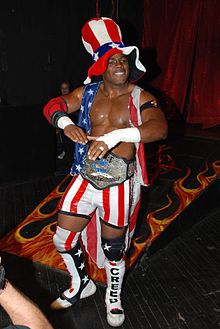 Creed as one half of the NWA Anarchy Tag Team Champions

1 Creed was brought in as the third member of Team Pacman, so as to be able to defend the TNA Tag Team championship under the Freebird Rule.