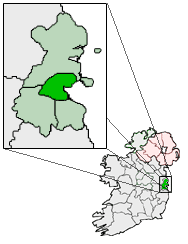 Glasnevin ("Glas Naíon", "Glas Na’on" - "Stream of the Infants"; also known as "Glas Naedhe" - "O'Naeidhe’s Stream" (after an ancient Chieftain) - in Irish) is a largely residential neighbourhood of , Ireland.

A mainly residential neighbourhood, it is located on the Northside of the city of (about 3 km north of Dublin City). It was originally established on the northern bank of the . It is bordered to the northwest by , northeast by , Whitehall to the east, and to the south and Cabra to the west.

Glasnevin seems to have been founded by Saint Mobhi (sometimes known as St Berchan) in the sixth (or perhaps fifth) century as a monastery. His monastery continued to be used for many years afterwards - St. Colman is recorded as having paid homage to its founder when he returned from abroad to visit Ireland a century after St Mobhi's death in 544. of is thought to have studied under St. Mobhi, but left Glasnevin following an outbreak of plague and journeyed north to open the House at Derry. There is a long street (Iona Road) in Glasnevin named in his honour. The church on Iona Road is called Saint Columba's.

A settlement grew up around this monastery, which survived until the Viking invasions in the eighth century. After raids on monasteries at and , the monasteries at Glasnevin and were attacked and destroyed.

By 822 Glasnevin had become the farm for Christ Church Cathedral and it seems to have maintained this connection up to the time of the Reformation.

The Danish raids of the 8th Century taught Ireland a hard lesson, and by the time the next wave of raiders arrived, some unity had been found under the High King (Ardrí), . The was fought on the banks of the River Tolka in 1014 (a field called the "bloody acre" is supposed to be part of the site). The Irish defeated the Danes in a battle, in which 7,000 Danes and 4,000 Irish died.

Th 12th century saw the (who had conquered in the eleventh century) set their sights on Ireland. As Ireland's rulers continued fighting amongst themselves the Norman King of England Henry II was invited to intervene. He arrived in 1171, took control of much land, and then parcelled it out amongst his supporters. Glasnevin ended up under the jurisdiction of Finglas Abbey. , Archbishop of Dublin, took responsibility for Glasnevin. It became the property the Holy Trinity (Christ Church Cathedral).

In 1240 a church and tower was reconstructed on the site of the Church of St. Mobhi in the monastery. The returns of the church for 1326 stated that 28 tenants resided in Glasnevin. The church was enlarged in 1346, along with a small hall known as the Manor Hall.

When broke from Rome an era of religious repression began. All church property and land was appropriated to the new Church, and monasteries (including the one at Glasnevin) were forcibly closed and fell into ruin. Glasnevin had at this stage developed as a village, with its principal landmark and focal point being its "bull-ring" noted in 1542.

By 1667 Glasnevin had expanded - but not by very much; it is recorded as containing 24 houses. The development of the village was given a fresh impetus when built his country residence, "The Glen" or "Glasnevin House" outside the village.

A Protestant church, St. Mobhi's, was built in the mid 17th century and most of it was rebuilt in the mid 18th century. It was part of a site where the ancient monastery of St. Mobhi once stood. It is said that is buried there. This claim is made because once somebody working in the graveyard there dug up a headless body.

The saw the settlement of English families on land previously held by Catholics. Lands at Glasnevin were leased to such families and a Protestant church was erected there in 1707. It was built on the site of the old Catholic Church and was named after St. Mobhi. The attached churchyard became a graveyard for both Protestants and Catholics.

By now Glasnevin was an area for families of distinction - in spite of a comment attributed to the Protestant Archbishop King of Dublin that "when any couple had a mind to be wicked, they would retire to Glasnevin". In a letter, dated 1725 he described Glasnevin as "the receptacle for thieves and rogues. The first search when anything was stolen, was there, and when any couple had a mind to retire to be wicked there was their harbour. But since the church was built, and service regularly settled, all these evils are banished. Good houses are built in it, and the place civilised." [Mant's History of the Church of Ireland]

Glasnevin became a township in 1878 and became part of the City of Dublin in 1900.

The parish population was recorded as 1,001, of whom 559 resided in the village. Glasnevin was described as a parish in the barony of , pleasantly situated and the residence of many families of distinction. [Topographical Dictionary of Ireland, Lewis (1837)]

When Drumcondra began to rapidly expand in the 1870’s, the residents of Glasnevin sought to protect their district and opposed being merged with the neighbouring suburb. One of the objectors was the property-owner, Dr Gogarty, the father of the Irish poet, .

On 1st June 1832, Charles Lindsay, and the William John released their holdings of Sir John Rogerson's lands at Glasnevin, (including Glasnevin House) to George Hayward Lindsay. This transfer included the sum of 1,500 Pounds Sterling. Although this does not specifically cite the marriage of George Hayward Lindsay to Lady Mary Catherine Gore, George Lindsay almost certainly came into the lands at Glasnevin as a result of his marriage.

George Hayward Lindsay’s eldest son, Lieutenant Colonel Henry Gore Lindsay, was in possession of his father’s lands at Glasnevin when the area began to be developed at the beginning of the twentieth-century. The development of his lands after 1903/04 marked the start of the gradual development of the area.

Glasnevin remained relatively undeveloped until the opening up of the Carroll Estate in 1914, which saw the creation of the redbrick residential roads running down towards Drumcondra. The process was accelerated by Dublin Corporation in the 1920s and the present shape of the suburb was firmly in place by 1930. Nevertheless, until comparatively recent years, a short stroll up the Old Finglas Road brought you rapidly into open countryside.

The start of the 20th century also saw the opening of a short lived railway station on the Drumcondra and North Dublin Link Railway line from to (then Amiens Street). It opened in 1906 and closed at the end of 1907.Fact|date=October 2007 Glasnevin railway station opened on and closed on . [cite web | title=Glasnevin station | work=Railscot - Irish Railways | url=http://www.railscot.co.uk/Ireland/Irish_railways.pdf | accessdate=2007-10-14]

The village has changed a lot over the years, and is now part of Dublin City. Some of its old charm remains, and can be readily seen in the area's old-world gardens, with their wealth of flowering shrubs and climbing plants. Glasnevin has a vibrant community, largely comprising of a mix of young families and their more senior counterparts from the middle of the last century, as well as students attending the University.

As well as the amenities of the Botanic Gardens and local parks, the national meteorological office , the [http://www.cfb.ie/Central Fisheries Board] , the , [http://www.sei.ie/ Sustainable Energy Ireland] , the Department of Defence and the national enterprise and trade board are all located in the area.

The house and lands of the poet were sold in 1790 to the Irish Parliament and given to the for them to establish Ireland's first Botanic Gardens. The gardens were the first location in Ireland where the infection responsible for the 1845–1847 potato famine was identified. Throughout the famine research to stop the infection was undertaken at the gardens.

The 27 acres which border the also adjoin the . In 2002 the Botanic Gardens gained a new multistorey complex which included a new cafe and a large lecture theatre. The Irish National is also located at the botanic gardens.

Prospect Cemetery is located in Glasnevin, although better known as , the most historically notable burial place in the country and the last resting place, among a host of historical figures, of , and also . This graveyard led to Glasnevin being known as "the dead centre of Dublin". It opened in 1832 and is the final resting place for thousands of ordinary citizens, as well as many Irish patriots.

Approaching Glasnevin via is what is known as "Hart's Corner" but which about a 200 years ago was called , and was then a well-known stage on the way to Finglas. At an earlier date the name possessed a wider signification and was applied to a considerable portion of the adjoining district.

At the start of the 18th century a large house, called Delville - known at first as The Glen - was built on the site of the present Bons Secours hospital. Its name was an amalgamation of the surnames of two of its tenants, Dr. Helsam and Dr. Patrick Delany (as Heldeville), both Fellows of Trinity College).

When Delany married his first wife he acquired sole ownership, but it became famous as the home of Delany and his second wife - Mary Pendarves. She was a widow whom Delany married in 1743, and was an accomplished letter writer.

They couple were friends of Dean Jonathan Swift and, through him, of . Pope encouraged the Delaneys to develop a garden in a style then becoming popular in England - moving away from the very formal, geometric layout that was common. He redesigned the house in the style of a villa and had the gardens laid out in the latest Dutch fashion creating what was almost certainly Ireland's first naturalistic garden.

The house was, under Mrs Delany, a centre of Dublin's intellectual life. Swift is said to have composed many of his campaigning pamphlets while staying there. He and his life - long companion Stella were both in the habit of visiting, and Swift satirised the grounds which he considered too small for the size of the house. Through her correspondence with her sister, Mrs Dewes, Mary wrote of Swift in 1733: "he calls himself my master and corrects me when I speak bad English or do not pronounce my words distinctly".

Patrick Delany died in 1768 at the age of 82, prompting his widow to sell Delville and return to her native England until her death twenty years later.

A timber church, which originally stood on Berkeley Road, was moved to a riverside site on Botanic Avenue early in the twentieth century. The altar in this church was from Newgate prison in Dublin. It served as the parish church until it was replaced, in 1972, by a pyramidal structure. The previous church was known locally as "The Woodener" or "The Wooden" and the new building is still known to older residents as "The new Woodener" or "The Wigwam". Its official name is Our Lady of Dolours.

In 1975 the new headquarters of , the Irish Meteorological Office, opened just off Glasnevin Hill. It, too, was built in a somewhat pyramidal shape and is recognised as one of the most significant, smaller commercial buildings, to be erected in Dublin in the 1970s.

Griffith Avenue, which runs through Glasnevin, and , is the longest tree lined Avenue in the Northern Hemisphere with no retail outlets. The Avenue spans 3 electoral constituencies. It was named after who was the founder and third leader of and also served as . Arthur Griffith also was buried in .

The of , , and are all organised locally by , while soccer is played by local clubs Iona F.C., Tolka Rovers and Glasnevin F.C. They celebrated their 125th anniversary in 2006.Fact|date=September 2008 is organised by Tolka Rovers.

Glasnevin is the site of an Educate Together national school.

*
*
*Saint Comgall
*
*
*
*
*
* - Television presenter and disc jockey
*
*
*
*
*
*John O'Connell
*
* The Parnell family, as well as the family of were also associated with Glasnevin.
* once lived across the road from the Glasnevin Model School, which is now the Glasnevin Educate Together School.