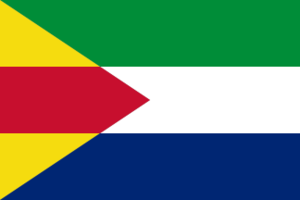 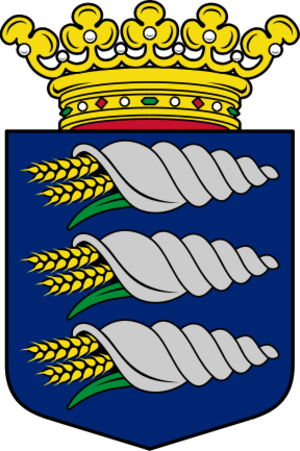 Het Bildt (Pronunciation|451 Het Bildt.ogg) is a in the province of in the northern ; its capital is . As of it had a population of 10,975. Het Bildt has 15.4 kilometers of coastline. Its soil is very fertile and agriculture is a major part of its economy; crops grown include onions, potatoes, and a variety of fruits (mainly s).

Het Bildt was largely settled by Dutch inhabitants from ; as a result, the language generally spoken there is "Bildts", a dialect that mixes Dutch (as spoken in South Holland) with West Frisian. All three languages - Bildts, Dutch, and Frisian - are spoken in the area.Only in (which did not become a part of the municipality of Het Bildt until 1984) is Frisian the predominant tongue. Signage in Het Bildt is generally bilingual, with names given in both Dutch and Bildts.

The name Het Bildt is formed out of the word "opbilden" which means the silting up of land. Het Bildt should not be confused with the county and town from the Utrecht province.

Number of inhabitants as of 1 January 2004: Source: CBS

The region now called Het Bildt was formed out of a sea called the (or Bordine) and was at one time subject to serious floods. The Middlesee once separated the western lands from the rest of the Frisian mainland. The western part was called and the city of was in its center. The eastern part was called . The city was located along Eastergoa's western coast. The Middelsee stretched all the way from the north to the west of . Earlier it extended still further, all the way to the (now het ) and Westergoa was an Island only accessible by boat. Around 1300 the sea began to become less accessible to boats. Eventually a dike was raised between the villages and to stop the continuous overflooding. As a result, the area south of this dike was no longer subject to the effects of tides and the parts that weren't already dry became solid land. Westergo and Oostergo were connected. The Swette has been kept as a small river between Leeuwarden and . After the dike was raised, the northern part of the Middelsee also gradually silted. In 1398 the dry fallen lands were given by the count to , Lord of IJsselstein. In 1498, even more land became dry. This trend, caused by the 's tide, has continued to the present.

The new dry land consisted of two regions, called "Het Grote Bildt" and "Het Kleine Bildt", and both came under the ownership of the Saxon duke Albert of Saxony-Meissen. He seriously considered converting the whole region into solid dry land but he was out of funds and died within a few years in 1504. The Saxon control of Friesland was by no means secure and was continually threatened by revolts in that province. Consequently Albert's successor Heinrich of Saxony, who was of a rather inert disposition, relinquished his claims to the governorship, and in 1505 an agreement was made between Albert's two sons by which Friesland was transferred to Heinrich's brother, George of Saxony, while Heinrich received an annuity and the districts of and .

In June 1505, Duke George of Saxony signed an eleven year farming-lease-agreement with the noble brothers from , , , and , and their brother in law . The brothers started the project in 1505 but in the years that followed the dykes they had laid could still not prevent the tides from flooding the land. After receiving money from George of Saxony and hiring the help of two nobles, misters Davelaer and Bontemantel, they accomplished the immense task of dyking the area properly. "Het Bildt" was diked by a 14-kilometer-long dike which was fashioned purely by hand, spade, boats, and mud. This work was accomplished by many workmen from three Dutch provinces: , , and . The area was mathematically planned and consists of straight, parallel roads pointing from south to north or east to west.

Along the main road three villages were formed. They are named Wijngaarden, Altoenae, and Kijfhoek, after the villages (, and ) in Zuid Holland, the province from which most of the workers came. In time the villages formed Catholic parishes (parochie) and the names of these parishes eventually were used as the names for these villages. Since then the villages have been called , and . George of Saxony was unable to suppress the revolts of the and (who formed a pact) and in 1514 he was required to hand over the whole Bildt area to the , with the permission of Charles V, the .

When the "" fought and freed itself from , Het Bildt became the 29th of . Eventually, it was decided that the area north of the dike would also be diked; this was done in 1600. The new dike was called the "" and the old 14-kilometer-long dike was called "". The area in between was called "Nij Bildt" and in 1637 was sold because the Frisian province was short on money. It is claimed that the s which can be seen throughout Friesland originated in Het Bildt. The former province inhabitants brought the design with them and it was later exploited for use all over the Frisian province (though the typical s do vary from Frisian farmhouses).In 1715 another western area was diked, named the "". On the rest of this area was also sold. In 1754 the eastern part, the "" was diked.

Today the "Oude Biltdijk" and the "Nieuwe Bildtdijk" are both covered with roads and houses; the road that runs across the old 14 kilometer long dike is the longest in the Netherlands.