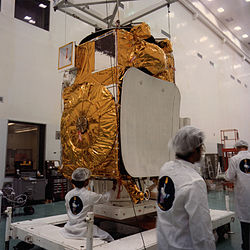 INSAT-1B, one of the first satellites to be controlled by MCF, Hassan

The Master Control Facility (MCF)(Hindi:मुख्य नियंत्रण सुविधा) is a facility set up by the Indian Space Research Organisation (ISRO) in the city of Hassan in the Indian state of Karnataka.[1] Established in 1982, this facility is responsible for monitoring and controlling the satellites launched by ISRO.[2] This was the only Master Control Facility of ISRO till another one was established in Bhopal in 2005.[3]

When ISRO wanted to establish a control facility, it inspected various sites that were offered to it within India. ISRO chose Hassan as the location (Location on Google Maps) because it was free of noise and encountered less terrestrial transmission than other proposed sites.[1] Low interference was a must since the facility should be able to pick up even very weak signals from the satellite. The land to setup this facility was spread across 17.2 hectares and offered by the Government of Karnataka.

This centre is responsible for controlling satellites and various commands are sent from this centre to the satellite to undertake the desired operations.

Currently MCF, Hassan controls the following 7 satellites: INSAT-2E, INSAT-3C, INSAT-3A, INSAT-3E, INSAT-4A, KALPANA-1 and GSAT-2.[4]. In October 1997, the MCF lost contact with the INSAT-2D satellite which was a serious blow to ISRO.[5] This glitch also affected the National Stock Exchange at Mumbai which had to suspend trading on October 3, 1997 till the VSAT terminals which it depended on were transferred to INSAT-2A.[5] Previously, this facility also controlled ISRO's earlier generation of satellites, like the INSAT-1B.[6]

C G Patil is the current Director of MCF. It has been identified that before the launch of any satellite, a group of scientists from MCF visit the Sri Manjunathaswamy temple at Dharmasthala to pray for the successful launch of the satellite. They bring a miniature model of the satellite with them, which is also prayed along with the God and the model is later donated to the temple.[7]

The INSAT Master Control Facility is one of the centers of Indian Space Research Organisation, which is responsible for post-launch operations on INSAT satellites including orbit manoeuvres, station keeping and on-orbit operations. INSAT MCF of ISRO are located at two locations, Hassan in the South Indian state of Karnataka and at Bhopal in Madhya Pradesh. At present, the centers support on-orbit operations on INSAT-3A, INSAT-3B, INSAT-3C, INSAT-3E, Kalpana-1, GSAT-3 and INSAT-4B satellites.