Móstoles is the second-largest city in population belonging to the autonomous community of Madrid. It is located 18 kilometres southwest from central Madrid. Móstoles was for a long time only a small village, but expanded rapidly in the twentieth century.

To some extent it is a dormitory suburb of Madrid, but it is also home to several polígonos (industrial estates). The city also hosts the main campus of the Universidad Rey Juan Carlos.

Politically, the city has moved from the left to the right in recent years. Since 2003, the mayor of Móstoles has been Esteban Parro del Prado (Partido Popular).

Móstoles became famous on May 2, 1808, when, although it was only a small village, one of its two mayors, Andrés Torrejón, declared war on France, following the Dos de Mayo Uprising the same day in Madrid which started the Peninsular War. A resident of Móstoles, Manuela Malasaña, became a popular heroine of the uprising that day; a subway station in Móstoles and a neighbourhood in Madrid are named after her. 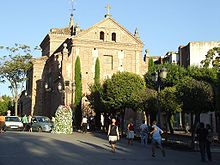 Some of the most important monuments in Móstoles are; the Mudéjar-styled church of La Asunción, whose tower provides a home for storks; the Baroque hermitage of La Virgen de los Santos (17th century) and the Monument to the Mayor (1908), located in Pradillo Square.