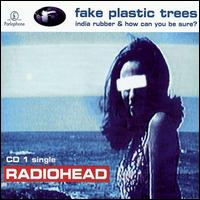 "Fake Plastic Trees" is a song by , from their second album "". It was the third single to be released from that album in the UK, but in the US, it was released as the band's first single from the album. "Fake Plastic Trees" is often seen as a turning point in the band's early career, along with "" from the same album. The track also placed at number 376 on "" magazine's list of the 500 Greatest Songs of All Time.

According to singer , the song was recorded as the band had just been to see Jeff Buckley play a set at Long Wong's in Tempe, ArizonaFact|date=June 2008 and when they got back into the studio, Yorke recorded the vocals in two takes. The song's lyrics are about in London and about the world of mass and mass consumption. [ [http://www.greenplastic.com/lyrics/fakeplastictrees.php Sourced from the page regarding the song on Green Plastic, a Radiohead fansite] - retrieved , ] One source of frustration for the band at the time was their US record label, Capitol, who wanted a strong track for American radio to follow the success of their previous hit single, "Creep". Surprised that the slow paced "Fake Plastic Trees" was seen as a potential single to follow up "Creep" , Yorke ultimately realized the label had remixed the track without his approval: "Last night I was called by the American record company insisting, well almost insisting, that we used a mix of it. I said 'No way'. All the ghost-like keyboards sounds and weird strings were completely gutted out of his mix, like he'd gone in with a razor blade and chopped it all up. It was horrible."

Directed by Jake Scott, the music video set inside a where the band go around in among several other characters, including clerks, children, an old man with a large beard who plays with toy guns, a woman in a large black hat, a bald man, a young man playing with a trolley, etc. The director has said about the video: "The film is actually an allegory for death and reincarnation but if you can read that into it you must be as weird as the people who made it." [http://www.greenplastic.com/discography/videography/fake_plastic_trees/index.php]

British singer covered this song in Radio 1's Live Lounge, and Canadian singer-songwriter performed "Fake Plastic Trees" in some concerts during the ""-era tours and concerts. [ [http://www.blender.com/guide/articles.aspx?id=824 Fake Plastic Trees Article on Blender] ] An acoustic version of the song appears on the "Clueless" soundtrack. Travis has also acoustically covered the song. has also covered this song during concerts before. have also covered the song on their acoustic live CD "Unplugged at the Walls".

Released over two singles, the b-sides accompanying "Fake Plastic Trees" include "India Rubber", a song in which can be heard laughing, and "How Can You Be Sure?" which dates from the band's earliest On a Friday days. It is from the and this finished version features backing vocals by a woman. The B-sides on the second single are acoustic versions by Thom Yorke and Jonny Greenwood recorded live at the Eve's Club in London.