Curtis Granderson (born March 16, 1981) is an American Major League Baseball player for the New York Yankees. Before joining the Yankees in 2010, he played with the Detroit Tigers (2004–2009). A center fielder, Granderson is known for being a five-tool player. Off the field, he is recognized for his commitment to the community through outreach and charity work.[1]

Granderson grew up in Lynwood, Illinois, a city south of Chicago. He attended high school at Thornton Fractional South High School in Lansing, Illinois. As a senior in 1999, Granderson hit .427 and was selected SICA Central All-Conference, and earned All-Area recognition from The Times of Northwest Indiana (Illinois edition) and the Daily Southtown.

As a freshman at University of Illinois-Chicago in 2000, Granderson led the team with seven home runs and 45 walks. He followed that with a strong sophomore season in which he hit .304, leading the team in runs, home runs, and walks. After his sophomore year, Granderson played in a summer collegiate league for the Mankato Mashers, now known as the MoonDogs, of the Northwoods League. Granderson was named Second-Team All-American by Baseball America and USA Today's Baseball Weekly and a Third-Team Louisville Slugger NCAA Division I All-American following his junior season. He graduated with a degree in business administration.

Having been drafted by the Tigers in the third round of the 2002 Major League Baseball Draft, Granderson started his minor league career with the Oneonta Tigers where he hit an impressive .344 in 52 games. In 2003 he played for the Lakeland Tigers. In 2004 he again posted solid numbers, this time with the Erie Seawolves, had his best minor league season, hitting .303 with 21 home runs and 93 RBI. In addition, he was named to the Eastern League's post-season all-star squad and made Baseball America's Double A all-star team, earning him a late season call-up to the Tigers where he made his major league debut on September 13 against the Minnesota Twins.

Granderson started the 2005 season with the Toledo Mud Hens where he again posted terrific numbers, hitting .290 with 15 home runs, 65 RBIs and 22 stolen bases. In September he was again called to the majors and had his first career inside-the-park home run on September 15, a five-hit game September 18 and a walkoff homer on September 26 against the Chicago White Sox.

Granderson became the Tigers starting center fielder for the 2006 season after beating out then teammate Nook Logan for the position during spring training. From the start of his major league career in 2004, Granderson had the longest errorless streak by a position player to start his career since Dave Roberts went 205 games from 1999–2003. He ended up hitting two home runs during the playoffs. 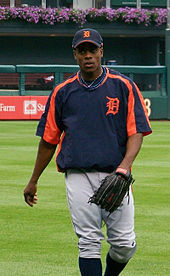 Granderson during his tenure with the Detroit Tigers in 2007.

Although Granderson was not listed on the 2007 All-Star Game ballot, due to the Tigers' decision to put Gary Sheffield as an outfielder on the ballot, he still received 376,033 write-in votes, the most write-in votes for any player in the Majors.[2]

Granderson was named the American League Player of the Week on July 16, the first time he had won the award. During the week ending July 15, Granderson hit .500 (8–16) with two doubles, a triple, and a home run. Granderson slugged .938, drove in two runs, scored seven runs, and had fifteen total bases during Detroit's four-game series at Seattle.[3]

On August 7, Granderson became the second player in franchise history to have at least 30 doubles, 15 triples, 15 home runs, and ten stolen bases in a single season when he hit a double in a game against the Tampa Bay Devil Rays. The other Tiger to accomplish this feat was Charlie Gehringer in 1930.

On September 7, Granderson became the sixth member all-time of baseball's exclusive 20–20–20 club. Granderson joined the 20–20–20 club with Kansas City's George Brett (1979), Willie Mays of the New York Giants (1957), Cleveland's Jeff Heath (1941), St. Louis' Jim Bottomley (1928), and Frank Schulte of the Chicago Cubs (1911). Granderson stole his 20th base of the season on September 9, joining Mays and Schulte as the only players in major league history to reach 20 doubles, 20 triples, 20 home runs, and 20 stolen bases in a season, a feat accomplished by the Philadelphia Phillies' Jimmy Rollins 21 days later.[4] Schulte was the first to accomplish the feat in 1911 while playing for the Chicago Cubs and Mays did it in 1957 with the New York Giants.[5]

He hit .302 with 23 home runs, and was 26 for 27 in stolen base attempts. He was one of only six batters in the AL to have at least 20 home runs and 20 stolen bases, along with teammate Gary Sheffield, Ian Kinsler, Alex Rodriguez, Grady Sizemore and B. J. Upton.

The one criticism of Granderson in his young career has been his propensity to strike out a lot at the plate.[6] However, he has improved in this area. After leading the American League with 174 whiffs in 2006, he dropped to seventh in the AL in 2007 (141 strikeouts).[7]

During the 2007 season, Granderson accumulated 23 triples, which led all of baseball. The American League and Detroit Tigers record is 26 triples, a feat achieved by the all-time triples king, Sam Crawford, in 1914. Granderson is the first player since 1949 to manage at least 23 in a single season.[8] Only ten of his triples were at home despite the fact Comerica Park has seen more triples since it opened in 2000 than any other ballpark in baseball. Granderson's 23 triples were as much or more than six entire teams managed in 2007, the Chicago White Sox, Cincinnati Reds, Los Angeles Angels of Anaheim, Oakland Athletics, Seattle Mariners and St. Louis Cardinals all had no more than 23 team triples.

On March 23, 2008, Granderson was placed on the 15-day DL with a broken finger on his right hand after being hit by a Travis Blackley fastball. This resulted in a stint of rehabilitation in the minor leagues during early April during which he played games with both the West Michigan Whitecaps and the Toledo Mud Hens.[10][11]

Granderson continued hitting well during the 2008 regular season, finishing with a .280 batting average, 13 triples and 22 home runs. He continued to improve his eye at the plate, striking out only 111 times (versus 141 in 2007 and 174 in 2006) and drawing a career-high 71 walks.[6] During August, he hit six triples,[12] including two in consecutive innings during a game against the Texas Rangers.[13]

Granderson was selected to the 2009 All Star Game. It was his first All Star appearance. In the game, he hit a triple in the top of the 8th inning and eventually scored the winning run.

Granderson was chosen as the 2009 Marvin Miller Man of the Year by the Major League Baseball Players Association for his off-field work.[1] 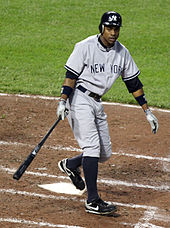 Granderson has had a breakout season in 2011, ranking among the MLB leaders in home runs and RBI.

On December 9, 2009 Granderson was traded to the New York Yankees in a three-team trade. In the deal, the Yankees received Granderson while sending Phil Coke and centerfielder Austin Jackson to Detroit. Also, the Arizona Diamondbacks received Yankees pitcher Ian Kennedy and Tigers pitcher Edwin Jackson in return for young pitchers Max Scherzer and Daniel Schlereth, who joined the Tigers.[14] He wears #14 with the Yankees, a change from his uniform number of #28 with the Tigers (Yanks manager Joe Girardi wears #28, symbolizing the team's drive for its 28th World Series championship).

On April 4, 2010, Granderson became the twelfth player to hit a home run in his first Yankee at bat.[15] Three days later, he hit a 10th inning home run off Jonathan Papelbon, which went on to be the winning run.

Although he missed some games due to a strained groin, Granderson finished the season with 136 games played, a .247 batting average, and 24 home runs.[16] Granderson began reworking his swing in August 2010 with the help of hitting coach Kevin Long.[17]

In August 2011, Granderson and Mark Teixeira became the first Yankees teammates to hit 30 home runs in 115 games since Roger Maris and Mickey Mantle in 1961. On August 10, Granderson hit two home runs against the Los Angeles Angels of Anaheim to tally a career-high 31 home runs.[18] On August 25, The New York Yankees became the first team to hit three grand slams in one game when Granderson, Robinson Cano, and Russell Martin all hit bases loaded home runs in a game against the Oakland Athletics. He also became the first player to score three times on grand slams in a single game. On August 28, Granderson hit two home runs against the Baltimore Orioles to pass Jose Bautista on the AL home run list and become the season leader in RBI.[19] Granderson was named American League Player of the Month for August 2011, in which he batted .286, with a .423 on base percentage, slugged .657, with ten home runs, 29 RBI, and 29 runs scored.[20] On September 17, after hitting his 40th home run, Granderon joined Willie Mays as the only two players to record at least 40 home runs, 10 triples, and 20 stolen bases in a single season.[21] Granderson finished fourth in balloting for the American League Most Valuable Player Award.[22]

TBS employed Curtis Granderson as a commentator alongside Cal Ripken, Jr., Dennis Eckersley and Frank Thomas for its coverage of the 2007 and 2008 baseball postseasons.[23]

Granderson grew up a fan of the Atlanta Braves.[24]

Granderson is an avid fan of World Wrestling Entertainment, and attended Wrestlemania XXIII in Detroit. He counts the Ultimate Warrior, The Undertaker, Junkyard Dog, Macho Man Randy Savage, and Hulk Hogan among his favorites. [25]

Off the field, Granderson has served as an ambassador for Major League Baseball International. He has traveled to Italy, China, South Africa and New Zealand.[26] In appreciation, Commissioner Bud Selig penned a thank-you letter to Granderson which read in part, "There are so many fine young men playing Major League baseball today, but I can think of no one who is better suited to represent our national pastime than you."[27]

In mid-August 2009 Granderson's hardcover book, All You Can Be: Dream It, Draw It, Become It!, made its print debut. Published by Triumph Books, Granderson "shares the lessons that he learned growing up—the importance of family and choosing the right friends, the power of listening and staying positive, and most important, the value of being yourself."[28] Thanks to fourth grade students from Michigan who help the MLB star bring his story to life, Granderson encourages his readers to develop a strong foundation of learning to help them reach their goals.

Granderson's foundation, Grand Kids Foundation, has raised money for kids around the country. There is also a Grand Kids NY Marathon team that raises money for the foundation.[citation needed]

Granderson was also voted one of the friendliest players in the Major Leagues, according to a poll conducted by Sports Illustrated to 290 players.[citation needed]

Granderson is one of a few players in MLB who wears his socks high, which he does to honor players from the Negro leagues.[15]