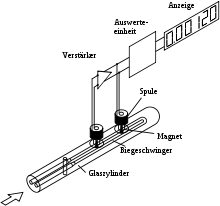 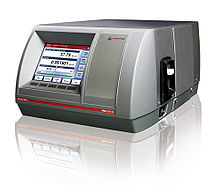 The oscillating U-tube is a technique to determine the density of liquids and gases based on an electronic measurement of the frequency of oscillation, from which the density value is calculated. This measuring principle is based on the Mass-Spring Model.

Overfilling the oscillator beyond the bearing points is irrelevant to the measurement. For this reason the oscillator can also be employed to measure the density of sample media that flow through the tube (Continuous Measurement).

In the digital density meter, the mechanic oscillation of the U-tube is e.g. electromagnetically transformed into an alternating voltage of the same frequency. The period τ can be measured with high resolution and stands in simple relation to the density ρ of the sample in the oscillator:

A and B are the respective instrument constants of each oscillator. Their values are determined by calibrating with two substances of the precisely known densities ρ1 and ρ2. Modern instruments calculate and store the constants A and B after the two calibration measurements, which are mostly performed with air and water. They employ suitable measures to compensate various parasitic influences on the measuring result, e.g. the influence of the sample’s viscosity and the non-linearity caused by the measuring instrument’s finite mass.

In 1967 the company Anton Paar GmbH presented the first digital density meter for liquids and gases at ACHEMA. It was the first instrument to employ the oscillating U-tube principle by Dr. Hans Stabinger and Prof. Hans Leopold for density determination.