Maldon is a town in Victoria, Australia, in the Shire of Mount Alexander local government area. It has been designated "Australia's first notable town" and is celebrated for its 19th-century appearance, maintained since gold-rush days. At the 2006 census, Maldon had a population of 1,601.[1]

The district where Maldon now stands was first discovered by white Europeans in 1836, during Major Thomas Mitchell's famous Victorian expedition. It was settled soon afterwards by pastoralists, and two sheep runs were established in the area, at the foot of Mount Tarrangower. In December 1853, gold was discovered at Cairn Curran (the name given to one of the sheep runs), and Maldon became a part of the Victorian Gold Rush.

The goldfield, which was named "Tarrangower Fields" after Mount Tarrangower, immediately attracted an immense number of men eager to make their fortunes at the diggings. Just one month after gold was first discovered, the Chief Commissioner for Goldfields reported 3000 miners had arrived at the diggings. A month after that, a journalist for The Argus reported that the road from Castlemaine to Maldon was lined with the shops of people hoping to make a living of their own from the miners:

The narrow road ... is lined on each side almost continuously with stores of every description, saloons, restaurants, eating houses, lemonade and beer shops, apothecaries' shops, and the tents of doctors, who, I am sorry to say, drive a very lucrative business at Tarrangower. 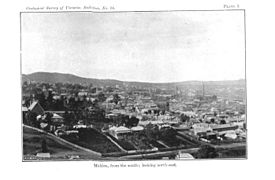 Maldon in 1904, seen from the south-west

By 1856 there was estimated to be 18-20,000 people at the goldfields, and the Victorian government arranged for the settlement to become a town, which was named Maldon. The post office had opened on 14 March 1854.[2]

In 1861, a government census declared the town's population to be 3341, servicing an additional 5,000-6,000 miners at the diggings. At that time it was the eighth-largest town in Victoria, and remained so for the next decade. However, as miners were forced to dig deeper to obtain usable specimens, or as mines ran dry completely, the population began to decline. By 1891, Maldon was reduced to 1,600 inhabitants. Mining of small claims continued through the 20th century, together with sluicing of gullies and tailings. In the 1980s, several new ventures commenced, including an open cut at Union Hill.

Maldon proved to be one of Victoria's richest quartz-mining centres, though with poorer alluvial results than others such as Castlemaine or Ballarat. Quartz mining extended southward through Sandy Creek to Newstead, along to Mia Mia and Muckleford, eastward to Fentimen’s and Smith’s Reefs, and even to the apex of Mount Tarrangower. In all, over seventy reefs were proven to contain gold deposits. Maldon was undoubtedly a poor man’s diggings, with many excellent yields from very small claims.

Maldon Vintage Machinery Museum: A fantastic museum continues to grow in Maldon that is run by volunteers and enthusiasts.It is home to objects large and small from the area such as stationary engines,farming implements,mining exhibits,fire pumps,and objects with links to Thompsons Foundary Castlemaine.It is situated not far off the main street and is well worth a visit.The volunteers are planning amazing things and are hampered only by time and their small work force. 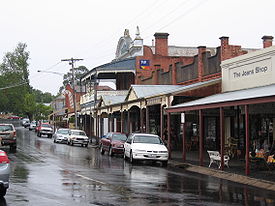 Today, Maldon's population is more or less stable at around 1,000 people. The town has changed very little since mining operations ceased, though a former bank at the junction of High and Main Streets has been supplanted by a service station. The town was declared a "notable town" in 1966 by the National Trust of Victoria, who explained that:

The township displays overall historical and architectural importance, particularly in its gold town buildings. The significance lies in the variety of building styles, and the area of mining is of interest with one mine still open to the public. Maldon boasts that it is largely unchanged since the 1850s, and has attracted considerable interest from tourists for its 19th-century atmosphere.

Maldon is now sustained by its appeal as a retreat and retirement venue for artists and writers, as well as tourist trade. The town holds several annual fairs, including a Winter Fair, Easter Fair, Art Show, and Folk Festival. Notable landmarks include Beehive Chimney, Mount Tarrangower and fire tower, Lake Cairn Curran, and the railway station. Maldon has its own newspaper, the Tarrangower Times, which was first published in 1858 and is the oldest continuously published newspaper in Victoria. The Maldon Museum and Archives Association operates a district museum and family-history centre in the former Maldon Shire Hall, and a vintage machinery museum.

The minimum-security female prison HM Prison Tarrengower is located to the near north of the township in the locality of Nuggety. 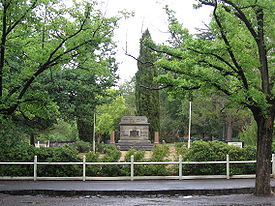 The memorial park at Maldon

The town has an Australian Rules football team competing in the Maryborough Castlemaine District Football League.

Golfers play at the course of the Maldon Golf Club on Golf Links Road.[3]

The town has an annual Easter Fair which includes events such as billy-cart racing, dancing in the street, the Great Aussie Scone Bake, a cemetery walk and the lighting of the Mount Tarrangower tower.[4] The Maldon Folk Festival has been held annually since 1974. (31 October to 3 November in 2008).[5]