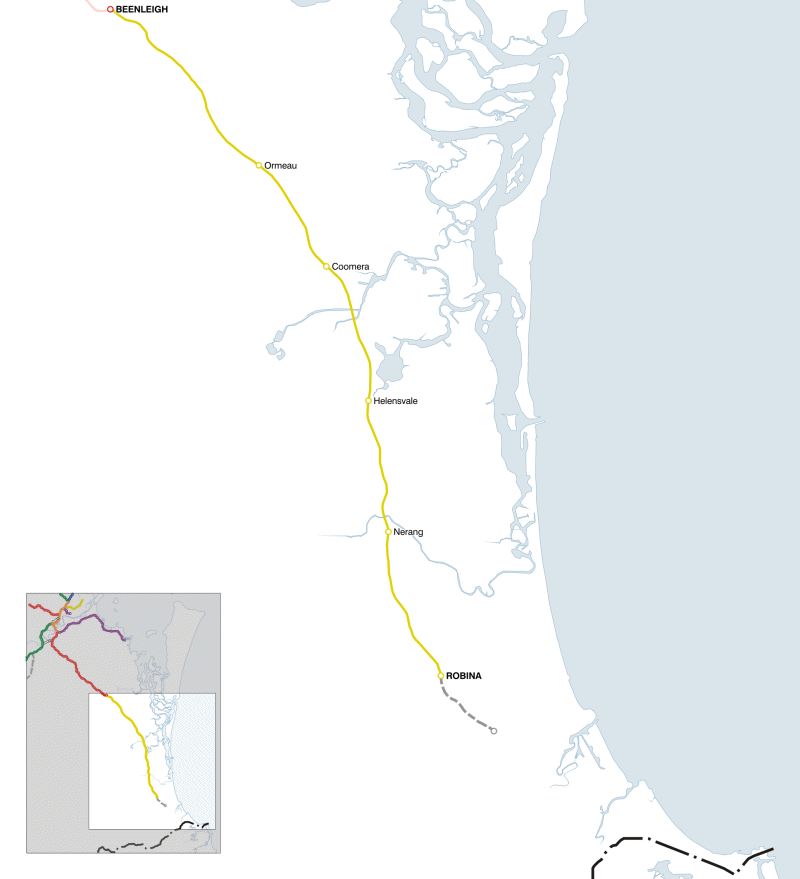 The Gold Coast railway line is an interurban operated by QR in , , connecting with the Gold Coast.

The original South Coast Line was opened to , in 1889 and to , in 1903. Due to the increasing popularity of the , the line was closed in . The new line and alignment from Beenleigh to Helensvale opened in , Nerang in , and the Robina terminus in .

The line will be extended and upgraded with new stations over the next decade. Firstly, a 4.1km extension to Varsity Lakes (Reedy Creek) will be built by mid-. Track will be duplicated between Ormeau and Coomera and then between Helensvale and Robina, leaving an isolated single track section spanning the Coomera River. Then, the railway will be progressively extended south until it reaches the Tugun Bypass, which it will run alongside before passing under the threshold of runway 32 at the Gold Coast Airport and looping around to the terminus near the airport carpark. In this last stage, the railway will cross the border into . Also, under the , reservations are to be made for possible new infill stations between Beenleigh and Ormeau (Yatala is a prime candidate) and at Coomera North, Helensvale North, Parkwood and Merrimac on the existing line. Services will also be upgraded with higher frequencies and capacity, made possible by the track duplication south (and triplication north) of Beenleigh.

In 2008 construction is expected to start on the Gold Coast Rapid Transit System which will either be or connecting to a new Parkwood railway station and or the Helensvale railway station.

Gold Coast trains operate express between Beenleigh and South Bank stations, stopping only at Loganlea and Coopers Plains in the off-peak.

Most services generally continue as the Airtrain service to , stopping at the International and Domestic terminals.

Passengers for/from the Beenleigh line change at either Beenleigh, Loganlea or Coopers Plains, Cleveland line at South Bank, Ipswich/Rosewood lines at Roma Street and all other lines at Central.