Cienfuegos is a city on the southern coast of Cuba, capital of the province of Cienfuegos. It is located about 250 km (160 mi) from Havana, and has a population of 150,000. The city is dubbed "La Perla del Sur" (Pearl of the South). Cienfuegos literally translates to "Hundred fires".

Cienfuegos, one of the chief seaports of Cuba, is a center of the sugar trade, as well as coffee and tobacco. While sugarcane is the chief crop, local farmers grow coffee.

The area was called the Cacicazgo de Jagua by the early Spaniards, and was settled by indigenous people.

The city was settled by French immigrants from Bordeaux and Louisiana, led by Don Louis de Clouet, on April 22, 1819.[1] Its original name was Fernardina de Jagua, in honor of Ferdinand VII of Spain[citation needed]. The settlement became a town (Spanish: Villa) in 1829, and a city in 1880. The city was subsequently named Cienfuegos, sharing the name with Cienfuegos, a Captain General in this time, in the island.

Near Cienfuegos was the scene of a battle on May 11, 1898, between American marines who attempted to sever underwater Spanish communication lines and the Spanish defenders.

During the Cuban Revolution the city saw an uprising against Fulgencio Batista and was bombed, on September 5, 1957.[4]

In 2005, UNESCO inscribed the Urban Historic Centre of Cienfuegos on the World Heritage List, citing Cienfuegos as the best extant example of the 19th-century early Spanish Enlightenment implementation in urban planning.[5] 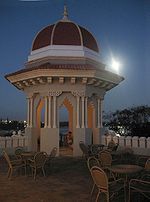