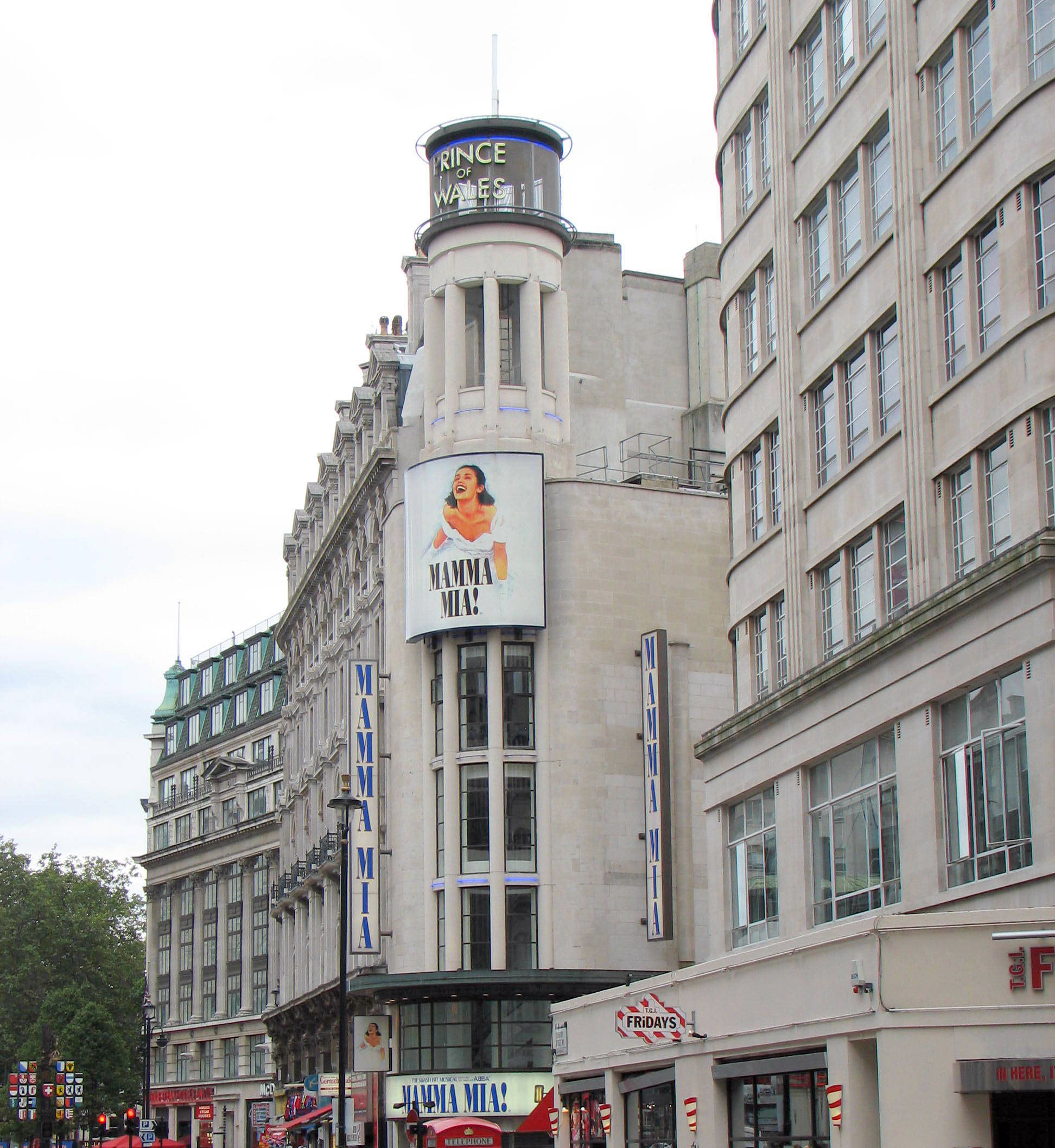 caption = Prince of Wales Theatre
address =
city = Westminster,
country =
designation = Grade II
latitude = 51.510278
longitude = -0.130278
architect =
owner = Delfont Mackintosh Theatres
capacity = 1,100
type =
opened = January 1884
yearsactive =
rebuilt = 1937 Robert Cromie
closed =
othernames =
production =
currentuse =
website = www.delfontmackintosh.co.ukThe Prince of Wales Theatre is a on , near in the . It was established in 1884 and rebuilt in 1937, and extensively refurbished in 2004 by Sir , its current owner. The theatre should not be confused with the former in Charlotte Street, off that was known as the "Prince of Wales Royal Theatre" or "" from 1865 until its demolition in 1903.

The first theatre on the site opened in January 1884 when built the "Prince's Theatre" for actor-manager Edgar Bruce. It was a traditional three-tier theatre, seating just over 1,000 people. The theatre was renamed the "Prince of Wales Theatre" in after the future Edward VII. Located between and , the theatre was favourably situated to attract theatregoers.

, where it moved in 1888. The wordless mime play "L'Enfant Prodigue" premiered in 1891 which, together with "A Pierrot's Life" in 1897, brought respectability to mime troupes in Britain.

' musical play, "In Town", often considered the first English musical comedy, was presented at the theatre in 1892 and was followed by Edwardes' even more successful "" in 1893. In 1895, 's ", the Hansom Cabby" began a long run starring the low comedian, , in the title role. The theatre then began to present straight plays with 's "Pelléas et Mélisande" (1898) and Wills's adaptation of ' "" as "The Only Way" (1899, also starring Harvey). starred in the successful "A Message from Mars" (1901). In 1900-01, Marie Tempest played the title roles in the play "English Nell" (based on Simon Dale's novel about ), "Peg Woffington", a dramatization of 's novel, as well as Becky Sharp in a dramatization of Thackeray's "".

After 50 years, the theatre's 800 seats were deemed insufficient for productions of the day, and it was demolished. On , sang to the workmen as she laid the foundation stone of the new -decorated theatre, designed by Robert Cromie, and the theatre opened on 27 October that year. The new theatre's seating capacity was about 1,100, and it had a larger stage and improved facilities for both the artists and the public, including a large, stylish stalls bar (the bar itself was 14 metres long), complete with dance floor. The first productions at the new theatre were "Les Folies de Paris et Londres", starring , followed by "Folies De Can-Can" in 1938, a continuation of the old theatre's series of successful risqué revues, which ran continuously until 2am every night. The musical comedy, "Present Arms", was offered in 1940, and in 1941 the theatre screened the UK premiere of 's "". The film had been banned in many parts of Europe, and the theatre's owner, Alfred Esdaile, was fined for showing it [citation|last = Prince of Wales Theatre|title= Theatre Programme, Mama Mia!|place = London (2007)|Year = 2007] .

Refurbishment was carried out in to increase the slightly to 1,160 seats and to modernise the theatre's facilities. New bars were added, the auditorium completely rebuilt, the backstage areas refurbished and the theatre's famous tower and exterior completely gutted and refurbished with new LED lighting and a crisp modern finish.

The theatre re-opened with its present show, 's musical "" on . On , "Mamma Mia!" became the longest running show ever at the Prince of Wales, overtaking the previous record held by "Aspects of Love" with 1,326 performances at the venue and counting. The production marked another landmark on Thursday , celebrating its 3,500th performance since its 1999 world première at the in Old Compton Street, London.