The University of Colombo (informally the Colombo University or the UoC) is a public research university located primarily in Colombo, Sri Lanka. The oldest institution of modern higher education in Sri Lanka, it is also the largest university in the island[1] specialised in the fields of natural, social and applied sciences as well as a leading study in mathematics, computer sciences and law.

Founded in 1921 as the University College Colombo affiliated to the University of London and degrees were issued to its students from 1923 onwards. The university traces its roots to 1870 when the Ceylon Medical School was established.[2] UoC has produced many notable alumni in the fields of science, law, economics, business, literature and politics.

The university is a state university, with most of its funding coming from the central government via the University Grants Commission (UGC). Therefore, as all other state universities in Sri Lanka the UGC recommends its vice chancellor for appointment by the President of Sri Lanka and makes appointments of its administrative staff. Its motto is "Buddhih Sarvatra Bhrajate" which means "Wisdom shines forth everywhere" in Sanskrit.

With a student population of over 11,000, the university is made up of seven faculties with 41 academic departments and eight other institutions. Most faculties offer both undergraduate and postgraduate degrees, with some offering courses for external students and distances learning programs.

The University of Colombo occupies an estate of 50 acres (200,000 m2) in the heart of the city of Colombo known as Cinnamon Gardens. The administrative center of the university is the College House, which houses the office of the vice chancellor, with its period architecture is a city landmark.

The College House, the Faculty of Graduate Studies (FGS) and the of Biochemistry, Molecular Biology and Biotechnology (IBMBB) is located along Thurstan Road between Queens Road and the India House. Situated between the Thurstan Road and Reed Avenue is the iconic Old Royal College Building, King George Hall, New Arts Theatre, sports ground along with the buildings of the science faculty and the University of Colombo School of Computing (UCSC). On the other side of the Reed Avenue is the university library flanked by the arts and law faculty buildings along with the gymnasium.

The estate includes several properties outside Cinnamon Gardens, such as the Faculty of Medicine which is located at Kynsey Road opposite the Colombo General Hospital in close proximity to the Postgraduate Institute of Medicine located at Norris Canal Road. The Institute of Indigenous Medicine is located in the suburbs of Colombo in Nawala. In addition, there are several properties outside Colombo, including the Sri Palee Campus in Wewala, Horana and the Institute of Agro Technology and Rural Science in Hambantota. 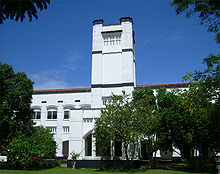 Iconic old Royal College Building, now home to the Department of Mathematics with the University tower.

The origins of the University of Colombo begins with the establishment of the Ceylon Medical School in June 1870, it was the second European medical school to be established in South Asia. In 1880 the school was raised to the status of college, thus becoming the Ceylon Medical College which permitted it to award the Licentiate in Medicine and Surgery (LMS) which continued until the late 1940s. In 1889 the College was recognized by the General Medical Council of the United Kingdom when holders of its license became eligible to practice in Great Britain.

The Ceylon University Association (CUA), formed in 1906 by a group of western educated elite headed by Sir Ponnambalam Arunachalam, urged the establishment of a local university. Owing to the persistent demands of the CUA the government decided in 1913 to set up a University college.

The Faculty of Medicine building and the Koch Memorial Clock Tower on Kynsey Road.

However, arguments regarding the nature and status of the institution to be set up, its location and the outset of World War I halted the establishment process until 1920 when the government purchased a private mansion called the Regina Walawwa which later came to be known as College House for the purpose of setting up the University College under the recommendations of Sir Edward Denham. The Ceylon University College was formally declared open in January 1921 in the building that was originally the main building of Royal College Colombo located on Thurstan Road opposite College House. The University College was affiliated to the University of London and though the prepared students for University of London external degrees which were jointly examined. Even though this fell short of a full university for Ceylon, it proved an ideal platform to develop the academia required for a university. It had two departments: Arts and Science.[3]

The University of Ceylon was established on 1 July 1942 by the Ceylon University Ordinance No.20 of 1942 which was passed by the State Council of Ceylon amidst World War II and threat of Japanese invasion. The Ceylon University College and the Ceylon Medical College were combined to form the University of Ceylon, with its administration based at College House and ability to grant its own degrees. The two departments of Arts and Science of the University College were upgraded to faculties, the Medical College became the faculty of medicine and a new faculty of Oriental Studies was established at Cruden House. The university library was based at Villa Venezia in Queens Road. Residential facilities were provided at the Union Hostel with three halls of residence Jayatilleke and Arunachalam based at Guildford Crescent and Queens Hall (Q Hall or Women's hostel) along with two other hostels named Brodie and Aquinas.[4]

The announcement of the creation of a separate university in Colombo was made in Parliament in the Throne Speech of 1967. The necessary legislation for this purpose had been prepared by the Minister of Education and Cultural Affairs under section 34 of the Higher Education Act No. 20 of 1966 on the recommendation of the National Council of Higher Education. The new institution which came into existence on 1 October 1967 with the Colombo Campus as its nucleus had initially a student population of nearly 5000 reading for degrees in Arts, Law, the Sciences and Medicine and a teaching staff of nearly 300. 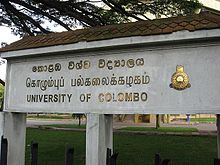 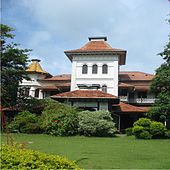 College House the administrative headquarters of the University of Colombo.

The UoC is a state university and depends on the government for much of its annual grant, which is provided by the University Grants Commission (UGC). Due to this its administration is heavily influenced by the UGC. Undergraduate education in fully subsidized and therefore completely free. The Governance of the university is under the provisions of the Universities Act No. 16 of 1978 and the Universities (Amendment) Act No. 7 of 1985 along with its own by-laws.

The University's administration is based upon that of the former University of Ceylon consisting of a dual structure of bodies: the Council (formally known as the University Court which is the governing body) and the Academic Senate (academic affairs).

Much of the appointments to officers and faculty are carried out by these bodies, however on the recommendations of the UGC.

Officers of the university

The Chancellor is the head of the University and awards all degrees, although most duties are carried out by the Vice-Chancellor. The appointment is made by the President of Sri Lanka, to a distinguished person in academics, clergy or in the civil society. The current chancellor is Most Rev. Dr. Oswald Gomis, the former Archbishop of Colombo.

Day-to-day management of the University is undertaken by the Vice-Chancellor, appointed by the President of Sri Lanka. The current Vice-Chancellor is Professor Kshanika Hirimburegama who replaced Professor T. Hettiarachchy in 2007.

Main article: Faculties and institutions of University of Colombo

There are six postgraduate institutions affiliated, three of which are located located off campus. These includes the Postgraduate Institute of Medicine, the only institution in the country that provides specialist training of medical doctors. The Colombo Planetarium and the Colombo Observatory are located within the main campus of the university.

University of Colombo library is a centrally-administered network of libraries of the university primary made up of a main library and two branch libraries. It is the oldest academic library in the country, since its constituent Colombo Medical College library was established in 1870. Containing 400,000 plus items, it is one of the largest libraries in the country today. Two branches of the library are established in faculties in the Faculty of Medicine and the Faculty of Science. The Ceylon Collection and the Rare Collection contains large number of important documents and books including a large palm-leaf manuscript collection.[6]

The UoC publishes some of the key academic journals in the country.

UoC has over the years established many strategic international links with universities around the world. Such links would be traced as far back as 1921 when the University College Colombo established close links to the University of London. Modern links have led to several global partnerships that has resulted in exchange in teaching and learning models, collaborative research, curriculum design, and student exchange.

UoC is a member of several international academic networks:

Over 10,000 students attend University of Colombo and others follow external degree programs conducted by the university. Students at the University of Colombo run over 43 clubs and organizations, including cultural and religious groups, academic clubs and teams, and common-interest organizations. Each faculty has tis own Students Unions, where committee members are elected to by the students of the faculty. These student societies include:

Since its inception the University of Colombo has maintained residential facilities for its undergraduate students. This has been a integral part of the urban university culture of the UoC. Some of the early residential halls that were part of the Union Hostal which was based in Colombo were moved to Peradeniya in the 1950s, these residential halls function independently now. Currently the university runs seven student hostels along with several houses leased on temporary basis which are administrated by the Student's Center. These hostels provide accommodation for 2973 undergraduate students annually. Residential facilities for academics and visiting faculty are provided both on and off campus.

In the University there are forty three Students’ Societies and Associations functioning in the university engaging in particular activities or interests. The University has a strong Rotaract movement with clubs established in three faculties.

Facilities for most sports are provided within the university, with a multi purpose gymnasium for indoor sports and the large university sports ground for many out door sports. The swimming and rowing team has use of the Swimming Pool of Royal College Colombo and the Colombo Rowing Club facilities respectively.

The University of Colombo are currently the overall champions of the Sri Lanka University Games which is held every 4 years among the public universities of Sri Lanka. The University is also the most successful in the games winning 8 out of the 10 championships since its inception in 1980.

The undergraduate population of the UoC numbered 9100 in 2009 with an annual intake of 2315. The graduate student population stood at 2504 the same year, the highest in the country. The university includes significant number of external students who engage in distance education courses provided by the university. Majority of the undergraduate courses and most of the post graduate courses are conducted in English medium.

Many prominent individuals have attended the University of Colombo, either as staff or students, including a president and a prime minister, countless academics, sportsmen and artists. Since the establishment of the Colombo Medical College and University College Colombo, UoC has been a center for learning for not only citizens of Colombo, but for people from all parts of the island and the world.[citation needed]

The permanent academic staff of the University of Colombo numbers around 500 and is supplemented by a large body of visiting faculty from the academics, scholars and artiest as well as experienced professionals form industry based in the thriving and vibrant metropolis Colombo. The university has around 70 Professors and 20 Associate Professors.