Woodberry is a neighborhood located in the north-central area of Baltimore, Maryland, USA. A largely residential, middle-class area, Woodberry is a historic community bordered on the north by Cold Spring Lane, on the south by Druid Hill Park, on the west by Greenspring Avenue, and on the east by the Jones Falls Expressway and the Jones Falls River. Woodberry is located within Postal Zip code 21211.[2]

Community organizations include the Concerned Citizens of Woodberry[3]. 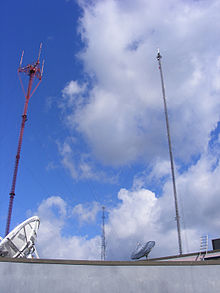 Woodberry also houses the facilities for four of Baltimore's commercial television stations, and because of its altitude, it also is the site of two large broadcasting masts. This area is also known as Television Hill (or simply TV Hill).

The highest land point in Baltimore, TV Hill is the transmitting site for five of the city's television stations. Three of them -- WMAR-TV (channel 2), WBAL-TV (channel 11), and WJZ-TV (channel 13) -- along with radio station WIYY, transmit from a red-colored, tri-mast candelabra tower, which stands 997 feet (304 meters) above ground level.

Two other stations, WBFF (channel 45) and WNUV (channel 54), along with radio station WWMX, transmit from a single tower just to the northeast of the candelabra; this mast stands 1,280 feet (390 meters) above ground level. The WBFF/WNUV tower also handles communications for the city of Baltimore (e.g., police, fire, public works).

Four television stations also have their broadcasting studios located on TV Hill: WJZ-TV, to the west of the towers, and located at the end of Malden Avenue; the WBAL Building (which is also home to WIYY and WBAL radio), on Hooper Avenue to the northeast; and WBFF/WNUV, which share facilities on West 41st Street, just southwest of the towers. (The WMAR-TV studios are located on York Road, at the Baltimore City/Baltimore County line.)

Some of the first housing situated in what is now Television Hill was built by David Caroll for his textile mill workers.[5]

Though there are the occasional apartment buildings, much of Woodbery's housing stock consists of two- and three-story rowhouses built in the early 20th century.

At the 2000 U.S. Census, there were 1,100 people residing in the neighborhood. The racial makeup of Woodberry was 72.1 percent White, 22.1 percent African American, 0.9 percent Native American, 1.4 percent Asian, 1.3 percent from other races, and 1.8 percent from two or more races. Hispanic or Latino of any race comprised 1.8 percent of the population. 61.4 percent of occupied housing units were owner-occupied. Twelve percent of housing units were vacant.