College Street Bengali: কলেজ স্ট্রীট is a street in north Calcutta. It stretches (approximately) from Bowbazar to Mahatma Gandhi road crossing. It houses many centres of intellectual activity in the city. Well-known academic institutions such as Presidency College, Sanskrit College, Scottish Church College, the Bethune College, the Medical College Kolkata , the Indian Institute of Social Welfare and Business Management, Vidyasagar College, Hare School, Hindu School and the University of Calcutta are situated on this street. The Indian Coffee House, a cafe that has attracted the city's intelligentsia for decades, and numerous bookstores are also located here. 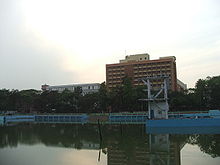 College Square, opposite the University of Calcutta

The College Street is most famous for its bookstores. Many bigwigs of the Bengali publication industry are situated here. The street is also dotted with countless very small book kiosks which sell old books. It is the largest second-hand book market in the world and largest book market in India and collectively boasts of a collection of almost any title ever sold at Kolkata. One can buy rare books at throw-away prices and extensive bargaining take place. 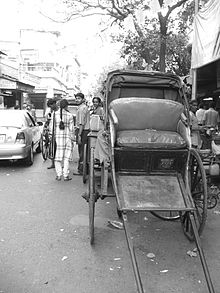 A rickshaw in college street

Dominating the center of the area is the Vidyasagar Sarovar, traditionally known as the College Square. It's a large tank that is used by numerous swimming clubs and coaching institutes. The leafy walk surrounding the tank is occupied by various people spending their leisure time.

In 2007, College Street featured among the famous landmarks of India which have made it to Time Magazine’s “Best of Asia” list.[1]

College Street in Maps of India