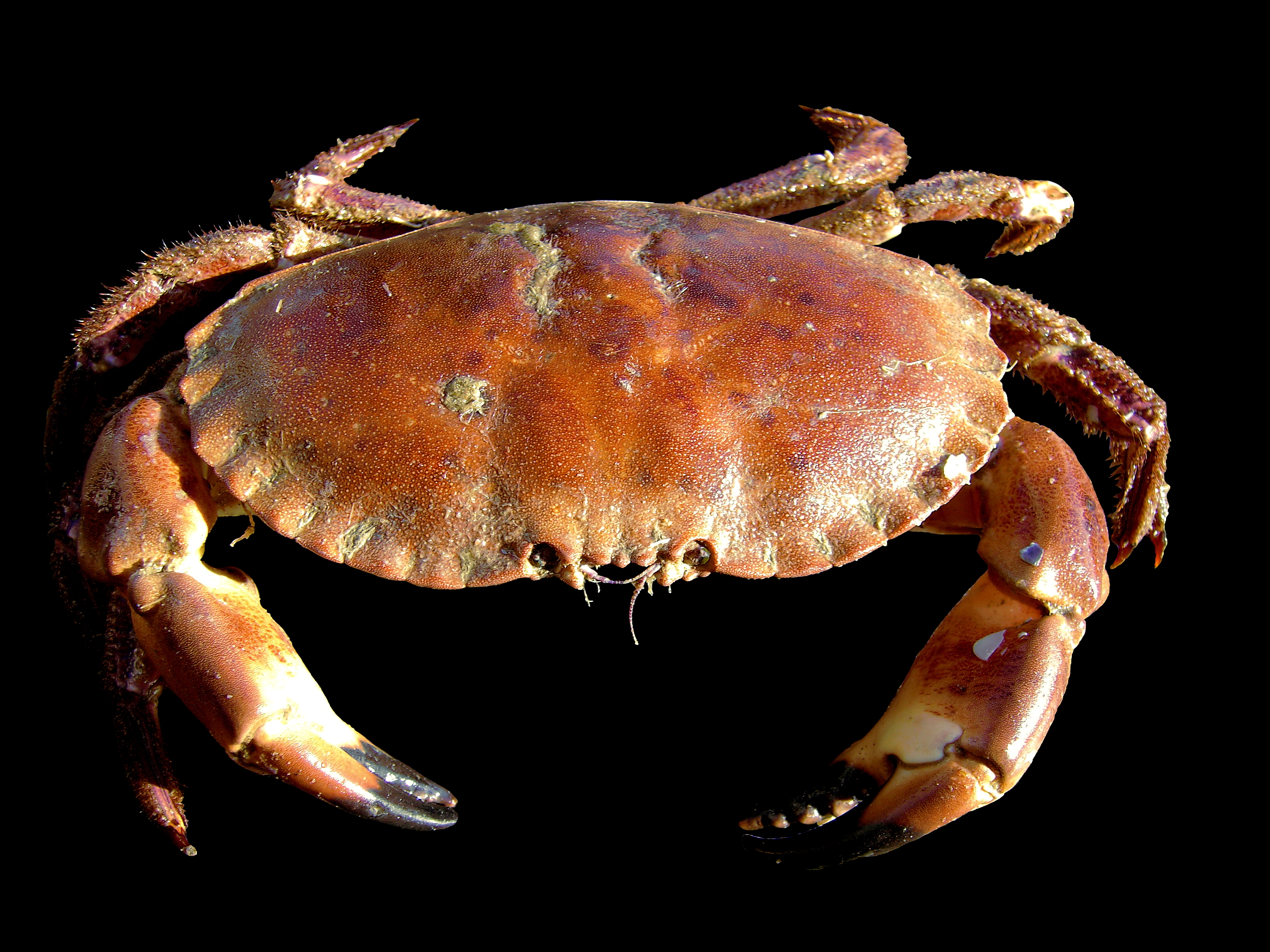 The edible crab, [The edible crab is also sometimes referred to as the "Cromer crab", because it is commonly caught around the coastal town of . In the languages of and , it is called a "chancre".] "Cancer pagurus", is a species of found in the , North Atlantic and the . It is a robust crab of a reddish-brown colour, having an oval with a characteristic "pie crust" edge and black tips to the claws. [cite web |url=http://www.marlin.ac.uk/species/Cancerpagurus.htm |title=Edible crab, "Cancer pagurus" |publisher=Marine Life Information Network |author=Neal, K.J. & E. Wilson |year=2005] Mature adults may have a carapace width of up to about 25 cm and weigh up to 3 kg.

The edible crab is abundant throughout the northeast Atlantic as far as in the north and northern Africa in the south, on mixed coarse grounds, mud and sand from shallow sublittoral to about 100 m. It is frequently found inhabiting cracks and holes in rocks but occasionally also in open areas. Smaller specimens may be found under rocks in the .

Edible crabs are nocturnal, hiding buried in the substrate during the day, but foraging up to 50 m from their hide-outs in the nighttime. [cite journal | quotes=no |title=Basic movement pattern and chemo-oriented search towards baited pots in edible crab ("Cancer pagurus" L.) |author= Skajaa K., A. Ferno, S. Lokkeborg & E. K. Haugland |journal= |volume=372 |pages=143–153 |year=1998 |doi=10.1023/A:1017047806464] It normally eats benthic animals such as other s and ; with its powerful claws it is able to shatter carapaces and shells. Males are extremely aggressive amongst themselves, and occasionally even kill each other. Males recognise other males by the size of the claws, females' claws being smaller.

The natural predators of adult "C. pagurus" are and s, whereas the e are eaten by various eaters and juveniles (in the tidal zone) by s.

Due to its size, "Cancer pagurus" is slower than other s and has powerful s to compensate. It may also bury itself under the sand to escape predators. When seized, "C. pagurus" adopts a characteristic position with the pereiopods and the chelipeds under the carapace to protect the more vulnerable ventral side. Because of this behaviour, this crab is called "dormeur" (French for "sleeper") in France.

The of "C. pagurus" is a reddish-brown color, although it is purple-brown in young specimens, and occasionally with white patches, and marked along the frontal-lateral margins with ten rounded lobes. Typically, a male has a carapace 90 mm long and 150 mm wide, although they may reach up to 250 mm wide in exceptional cases. A fold of the carapace extends ventrally to constitute a branchial chamber where the lie.

The first is modified into a strong cheliped. The claw's fingers, the dactylus and propodus, are black. The other pereiopods are covered with rows of short stiff e and the dactylus is black at the tip, and ends in a sharp tip. From a frontal view it is possible to distinguish the antennae and s. Beside these there are the orbits in which the eyes are situated. The comprise the third s, behind which there are two further pairs of maxillipeds, a pair of maxillae, a pair of maxillules, and finally the mandibles.

A ventral view shows the abdomen reduced and folded under the carapace. The abdomen has a different shape for male and female: in males it is comparatively narrow, whereas in the female it is wider. Hidden beneath the abdomen are the sexual organs and the anus. Reproduction takes place mostly in winter; the male captures the female and holds her under himself until she moults. Internal fertilisation takes place before the hardening of the new carapace, with the aid of two abdominal appendages (gonopods). The fertilised eggs, numbering up to 20,000, are held under the female's abdomen until they hatch. The first developmental stage after hatching is a planktonic larva (1 mm) called the that develops into a , , and finally a juvenile. The first juvenile stage is characterised by a well developed abdomen, which will, in time, become reduced in size and folded under the sternum.

Edible crabs are heavily exploited commercially throughout their range. It is illegal to catch crabs of too small a size around the coast of Britain, a conservation measure brought in the 1870s. Crabs with a shell diameter of less than 140 mm for females and 160 mm for males may not be taken.