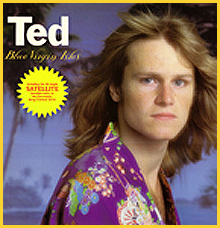 
"Blue Virgin Isles" was the fifth album and the international debut from Swedish singer/songwriter , released in late on the label /. The album was mainly recorded with American and English musicians in Hollywood, California and produced by Norwegian-American Eirik W. Wangberg, with some additional overdubs made in Stockholm.
After having won the 1979 , the Swedish pre-selections for the , with the song "Satellit"/"Satellite" the album was re-released both internationally and domestically to include this track. The second edition of the album includes both the Swedish and English language versions of "Satellit".
"Blue Virgin Isles" in its entirety remains un-released on CD, although nine of the tracks were included in the 2001 4 CD box set "Solregn".

"All lyrics written by Kenneth Gärdestad, music by "