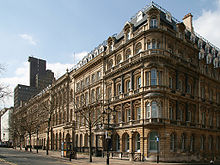 Colmore Row is a street in the centre of Birmingham, England, running from Victoria Square to just beyond Snow Hill station. It is traditionally the city's most prestigious business address.[1]

Colmore Row and its environs were designated a conservation area in 1971, which was extended twice in 1985. Colmore Row itself has 23 listed buildings, two listed at Grade I and two at Grade II*.[2] 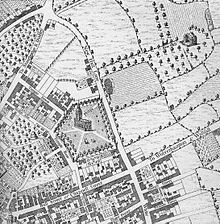 Before this area of Birmingham was developed in 18th century, Colmore Row was a country lane called New Hall Lane, connecting the roads from Birmingham to Dudley and West Bromwich and separating the farmlands of the New Hall Estate to the north from those of the Inge Estate to the south.[3] Development of the south of the lane started with the building of St Philip's Church (now St Philip's Cathedral) in 1708. In 1746 a private Act of Parliament opened up the New Hall Estate to the north for development, with the first plots being let and developed from 1747 onwards.[4]

The road was renamed at this point, but initially only the stretch between Newhall Street and Livery Street was named Colmore Row (after the Colmore family, owners of the New Hall Estate). The stretch between Newhall Street and New Street was named Ann Street, after head of the family Ann Colmore, while the stretch north of Livery Street, originally called Bull Lane, became known as Monmouth Street.[4]

Ann Street disappeared as a name when the street was divided between Colmore Row and Victoria Square, when the latter was created (initially as Council House Square) in 1879.

The original buildings of Colmore Row were the brick and stucco Georgian houses typical of the late 18th century. The 120 year leases on these properties started to expire in the 1840s and 1850s, and between 1869 and 1900 all were replaced by the late Victorian commercial premises that still give the street its predominant character.[5] 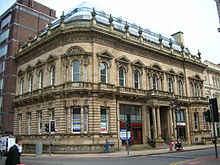 After the Second World War, Colmore Row was to have formed part of the extensive Inner Ring Road system planned by City Engineer Herbert Manzoni. This would have necessitated demolishing all of the buildings between Colmore Row and Waterloo Street, but fell victim to increasing land values and awareness of conservation issues in the 1970s. The plans for the street included widening it to a width of 112 ft (34 m) with a central reservation of 14 ft (4.3 m) in width.[6] Ironically, the likelihood of forthcoming comprehensive redevelopment protected many of the buildings from being demolished to make way for office developments (see Colmore Business District), and today Colmore Row and the surrounding area has one of the most consistent 19th century streetscapes in Central Birmingham.[3]

In 1980s, Barclays Bank proposed a redevelopment of 55-73 Colmore Row. The scheme involved the demolition of the entire building except for the façades and the banking hall of the listed building. The local planning authority called for greater retention of the building structure as with other schemes in the area. The agents submitted multiple planning applications to put pressure on the planning department. As the planning department failed to come to a decision on two planning applications in their time periods, the bank took the case to a government department. Barclays and local planning authority failed to reach any deal in negotiations, which eventually broke down. The government saw that the retention of the façade was satisfactory as it allowed the economic reuse of the site. The decision left the development and design framework for the area in a weakened state as the building subject to the decision was deemed to be of less national importance in respect to its local importance.[clarification needed][7] The use of façadism on the building has since been seen as successful following the addition of Mansard roofs providing additional floorspace.[8]

In addition to Snow Hill railway station, and the current terminus of the Midland Metro, Colmore Row also hosts the city centre bus stops AB to AF - which together have the IATA location identifier code ZBC.[9]