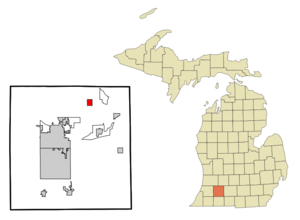 Richland is a village in Kalamazoo County in the of . The population was 593 at the 2000 census.

The village is within Richland Township about nine miles northeast of Kalamazoo.

There were 258 households out of which 29.5% had children under the age of 18 living with them, 54.7% were married couples living together, 8.1% had a female householder with no husband present, and 34.1% were non-families. 29.5% of all households were made up of individuals and 14.3% had someone living alone who was 65 years of age or older. The average household size was 2.30 and the average family size was 2.84.

Richland is located in the middle of what was once the Gull Prairie, an upland area relatively free of trees and maintained by natural and man-made fires. The area had a few villages, one was located on the west side of nearby Gull Lake. Fish and game were plentiful, and the land was very fertile. Since there were few trees to clear, the prairie was among the first areas of to be settled. By the 1830s, the Native Americans had been moved west, and Richland was a thriving frontier village. The village even contended with Prairie Ronde for the county seat, but the centrally-located village of Bronson (now ) was ultimately chosen.

Lacking a flowing stream that would have provided water power, Richland never developed significant industry and remained a sleepy farm community until the late twentieth century. In the 1980s and 90s, small employers such as Richard Allen Medical moved to the edge of town, and Richland became a bedroom community for Kalamazoo. The high quality of the local Gull Lake School District also drew people from surrounding areas. New subdivisions were built in what had been hilly farm country.