In the 1994 Constitution of Belarus, Article 19 lists the official symbols of the country. Article 19 reads:

The national flag has been in use since June 7, 1995, one of two symbols adopted in the 1995 referendum. The main elements of the flag is a red and green bicolor, then decorated with an ornament pattern at the hoist position. The current flag is a modification of the 1951 flag used while the country was a republic of the Soviet Union. In the Soviet version, a hammer and sickle was placed near the top-hoist corner and the ornament colors were inverted. Several flags used by government officials and agencies were based on the national flag.

Despite being replaced, the former flag of Belarus is used by those who oppose current Belarusian President Alexander Lukashenko.[2] The former flag consisted of a white background with a red horizontal stripe in the middle. It was used by the Belarusian National Republic and immediately after independence from the Soviet Union in 1991. 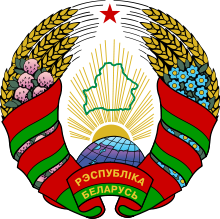 The other national symbol that was chosen in the 1995 referendum was the national emblem. The elements of the emblem include a ribbon in the colors of the national flag, a map of Belarus, wheat ears and a red star. At the base of the ribbon, it says the country name in the Belarusian language. The emblem is an allusion to the one used by the Byelorussian SSR, designed by Ivan Dubasov in 1950. In the Soviet version, a hammer and sickle replaced the map of Belarus and the ribbon was all red. On the left and right ribbons, the Soviet motto Workers of the world, unite! appeared in the Belarusian and Russian languages.[3]

The national emblem that was used at the time of the BNR and post-Soviet independence was called the Pahonia (the chase). On the base of a red shield, an armored white knight is mounted on a silver horse, with a sword drawn and charging to the left. On the shield of the knight, a golden Patriarchal cross is displayed. A variant of the Pahonia is used as the coat of arms of Lithuania.[4]

The only symbol that hasn't changed over during independence is the national anthem. Adopted during the Soviet era, "My Belarusy" was used provisionally until 2002. The only change that occurred was dropping the Soviet-era lyrics and choosing just to use the music, composed by Nyestar Sakalowski. On July 2, 2002, President Lukashenko issued a decree adopting new lyrics to the anthem, written by Uladzimir Karyzny. Klimkovich also wrote the lyrics to the Anthem of the Byelorussian SSR. Not only the lyrics were chosen, a protocol guide related to the national anthem was released by Lukashenko.[5] The reason that was given for keeping Sakalowski's music was to keep the historic traditions of the country.[6] While references to Lenin, the Communist Party of the Soviet Union and the idea of Soviet brotherhood were dropped, the general idea of a "friendship of peoples" still remains present. According to the Belarusian Government, once the national anthem was adopted, the long process to adopt the three national symbols of Belarus was completed.[6]

Other than the national flag, anthem and emblem, there are unofficial symbols of the country. The European bison, commonly called the wisent, is native to Belarus. The Slavic name for the bison is zubr; the zubr is used on the flag and arms of the Brest Oblast[7].