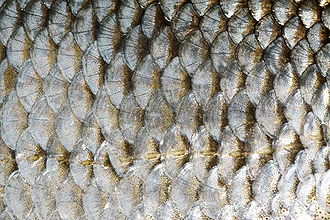 The cycloid scales of a common roach (Rutilus rutilus). The row of lateral line scales is visible in the lower half of the image.

The skin of most bony and cartilaginous fishes are covered by scales. Scales vary enormously in size, shape, structure, and extent, ranging from rigid armor plates in fishes such as shrimpfishes and boxfishes, to microscopic or absent in fishes such as eels and anglerfishes. The morphology of a scale can be used to identify the species of fish they came from.

Fish scales are produced from the mesoderm layer of the dermis, which distinguishes them from reptile scales. The same genes involved in tooth and hair development in mammals are also involved in scale development.[1]

Also called dermal denticles, placoid scales are found in the cartilaginous fishes: sharks, rays, and chimaeras. They are structurally homologous with vertebrate teeth ("denticle" translates to "small tooth"), having a central pulp cavity supplied with blood vessels, surrounded by a conical layer of dentine, all of which sits on top of a rectangular basal plate that rests on the dermis. The outermost layer is composed of vitrodentine, a largely inorganic enamel-like substance. Placoid scales cannot grow in size, but rather more scales are added as the fish increases in size.

Similar scales can also be found under the head of the Denticle herring.

Sharks are entirely covered by placoid scales. Studies have found that the scales create tiny vortices that reduce drag, which makes swimming more efficient, as well as quieter compared to bony fishes. The amount of scale coverage is much less in rays and chimaeras. The rough, sandpaper-like texture of shark and ray skin, coupled with its toughness, has led it to be valued as a source of leather. Called shagreen, one of its many applications was in the historical manufacture of hand-grips for swords.

Cosmoid scales are found in several ancient lobe-finned fishes, including some of the earliest lungfishes, and were probably derived from a fusion of placoid scales. They are composed of a layer of dense, lamellar bone called isopedine, above which is a layer of spongy bone supplied with blood vessels. The bone layers are covered by a complex dentine layer called cosmine and a superficial outer coating of vitrodentine. Cosmoid scales increase in size through the growth of the lamellar bone layer.

Ganoid scales are found in the sturgeons, paddlefishes, gars, bowfin, and bichirs. They are derived from cosmoid scales, with a layer of dentine in the place of cosmine, and a layer of inorganic bone salt called ganoine in place of vitrodentine. Most are diamond-shaped and connected by peg-and-socket joints. In sturgeons, the scales are greatly enlarged into armor plates along the sides and back, while in the bowfin the scales are greatly reduced in thickness to resemble cycloid scales (see below).

Elasmoid scales are thin, imbricated scales composed of a layer of dense, lamellar bone called isopedine, above which is a layer of tubercles usually composed of bone, as in Eusthenopteron. The layer of dentine that was present in the first sarcopterygians is usually reduced, as in the extant coelacanth, or entirely absent, as in extant lungfish and in the Devonian Eusthenopteron[2]. Elasmoid scales appeared several times. They are present in some lobe-finned fishes: coelacanths, all extant and some extinct lungfishes, some tetrapodomorphs like Eusthenopteron, amiids, and teleosts, whose cycloid and ctenoid scales represent the least mineralized elasmoid scales.

Ctenoid scales can be further subdivided into three types:

Cycloid and ctenoid scales are overlapping, making them more flexible than cosmoid and ganoid scales. They grow in size through additions to the margin, creating bands of uneven seasonal growth called annuli (singluar annulus). These bands can be used to age the fish.

Different groups of fish have evolved a number of modified scales to serve various functions.

Many groups of bony fishes, including pipefishes and seahorses, several families of catfishes, sticklebacks, and poachers, have developed external bony plates, structurally resembling placoid scales, as protective armor. In the boxfishes, the plates are all fused together to form a rigid shell enclosing the entire body. Yet these bony plates are not modified scales, but skin that has been ossified.