The M242 Bushmaster is a 25 mm (25×137mm) chain-fed autocannon. It is used extensively by the US armed forces, as well as by NATO's and some other nations' forces in ground combat vehicles and watercraft. Originally, the weapon was designed and manufactured by McDonnell Douglas (later acquired by the Boeing Corporation); however it is now produced by Alliant Techsystems (ATK) of Mesa, Arizona.

It is an externally powered, chain driven, single-barrel weapon which may be fired in semi-automatic or automatic modes. It is fed by a metallic link belt and has dual-feed capability. The term "chain gun" derives from the use of a roller chain that drives the bolt back and forth. The gun can destroy lightly armored vehicles and aerial targets (such as helicopters and slow-flying aircraft). It can also suppress enemy positions such as exposed troops, dug-in positions, and occupied built-up areas. The standard rate of fire is 180 rounds per minute. The weapon has an effective range of 3,000 metres (9,800 ft), depending on the type of ammunition used.

The Enhanced M242 on the M2 Bradley (the top-mounted metal box and spotlight are MILES training attachments, not part of the gun system). Note the fluted barrel.

The Bushmaster project started as an offshoot of the US Army's MICV-65 program that was attempting to introduce a new infantry fighting vehicle to replace their existing M113s. Part of this program called for a new scout vehicle to replace the M114, a parallel development taking place under the XM800 Armored Reconnaissance Scout Vehicle. Both the XM800 and the cavalry version of the XM701 MICV vehicles were armed with the M139, a US-built version of the Hispano-Suiza HS.820 20 mm autocannon.

During the testing phase the Army eventually rejected the XM701 and started work on a newer design known as the XM723. Soon after the XM800 was also rejected. This led to the combination of the two programs, moving the scout role to the cavalry version of the XM723.

At the same time, the M139 proved to be disappointing and a contract for a new weapon to replace it started in 1972 at Hughes Aircraft as the Vehicle Rapid-Fire Weapons System-Successor, or VRFWS-S. This was essentially a power-driven gun firing similar ammunition as the HS.820, the power driven mechanism would ensure operation even in the case of a misfire.

Progress on the VRFWS-S was slow, and eventually resulted in a switch to a much more powerful 25 mm round. Similar delays in the MICV program meant the ultimate vehicles descending from their efforts, the M2/M3 Bradley Fighting Vehicle, did not enter production until 1981, by which point the Bushmaster had matured. Since 1990, there have been several enhancements made upon the weapon, resulting in the Enhanced 25 mm gun.

To date, more than 10,500 weapons are in service. One of the major reasons for this popularity is the extremely reliable nature of the weapon. It has a rating of 22,000 mean rounds between failure (MRBF), much higher than many comparable devices.

Close up of the MK 38 naval variant

Unlike most automatic firearms, the M242 does not depend on gas or recoil to actuate its firing system. Instead, it uses a 1 hp (0.75 kW) DC motor, positioned in the receiver to drive the chain and dual-feed system. This system uses sprockets and extractor grooves to feed, load, fire, extract, and eject rounds. A system of clutches provides for an alternate sprocket to engage and thus allows the gunner to switch between armor piercing and high explosive rounds.

The weapon assembly consists of three parts: the barrel assembly, the feeder assembly, and the receiver assembly. The three-part structure makes it possible for a single person to install or remove the system despite its considerable total weight.

M793 Target Practice with Tracer (TP-T) rounds for the MK-38 being inspected. 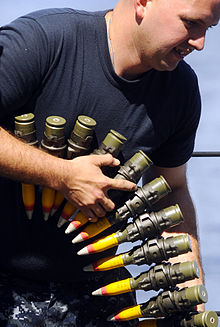 A wide range of ammunition has been developed for this weapon, providing it with the capability to defeat the majority of armored vehicles it is likely to encounter, up to and including some tanks. The ammunition used in the M242 may also be used in a variety of weapons such as the GAU-12 Equalizer, the French Giat M811, or the Swiss Oerlikon KBA weapon system. It has the capability to fire U.S. manufactured ammunition as well as the NATO equivalents thereof. Primarily though, it fires six types of rounds: the M791, M792, M793, M910, MK210, and M919. 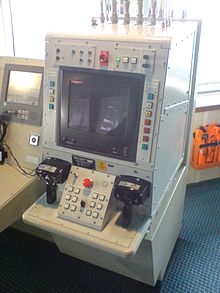 Weapons station for the remote controlled M242 on the HMNZS Canterbury multi-role vessel. 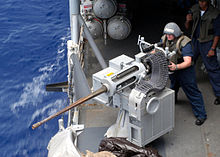 The Mk38. The M242 has a characteristic fluted gun barrel to reduce weight and assist cooling.

The M242 is currently in use by the United States Army, Navy, Marine Corps, and Coast Guard, the New Zealand Army, Royal New Zealand Navy, the Norwegian Army, the Spanish Army, the Swiss Army, the Canadian Army, the Australian Army and Navy, the Israeli Navy, Philippine Navy, the Singapore Army and Republic of Singapore Navy as well as several others. The wide usage results in several variations and modifications on the standard M242 weapon system.

The M242 is standard equipment on the U. S. Army M2 and M3 Bradley fighting vehicles, it is also in use on the LAV-25. Before the project was cancelled, the Bushmaster II 30 mm chain gun (a successor to the M242) was used on the Marine Corps' Expeditionary Fighting Vehicle (EFV).

The M242 is also a popular choice of primary armament for armoured fighting vehicles manufactured around the world, such as Singapore's Bionix AFVs and as the Rafael OWS-25 mounted on upgraded M113A2 Ultra IFVs.[1]

Work on an upgraded weapon began in 1990. In doing so, three major systems and seven minor systems were improved. The modifications began with introducing a chrome-lined barrel, an enhanced feeder, and an enhanced receiver. The weapon systems also received minor upgrades such as quick-detachable link covers, a larger breech assembly, a high efficiency muzzle brake, longer recoil, an integral round counter, an extended life firing pin and spring, and a triple-spring drive clutch. It was first put to use on the M2A3 Bradley, the third version of the M2 Bradley Fighting Vehicle.

In 1977, the U. S. Navy realized that it needed a replacement for the Oerlikon/Hispano-Suiza 20mm Mk 16 series of guns. In 1986, this requirement was satisfied with the introduction of the Mk 38 Mod 0 weapons system. A derivative of the M242 system, the Mk 38 consists of the M242 chain gun and the Mk 88 Mod 0 machine gun mount. It provides ships with defensive and offensive gunfire capability for the engagement of a variety of surface targets. Designed primarily as a close-range defensive measure, it provides protection against patrol boats, floating mines, and various shore-based targets. The US Navy also developed a high ROF variant under the designation Mk 46 Mod 0.

Recently, several US Navy platforms have been outfitted with a newer version, the Typhoon Weapon System designated Mk 38 Mod 2,[2][3] which is remotely operated and includes an Electronic Optical Sight, Laser Range-Finder, FLIR, and a more reliable feeding system, enhancing the weapon systems capabilities and accuracy. In 2006 the Sri Lanka Navy added M242 to its fleet of Fast Attack Craft.[4]

The system is also in used by the Republic of Singapore Navy's Endurance class landing platform dock ships[5] and were deployed as part of coalition forces' port security efforts in Iraq as well as anti-piracy roles in the Gulf of Aden.[6] Aside from that, the Police Coast Guard's New Coastal Patrol Craft (NCPC) has adopted the system as its main armament.[7]