Karl Gebhardt (23 November 1897 in Haag – 2 June 1948 in Landsberg am Lech) was a German medical doctor; personal physician of Heinrich Himmler; and one of the main coordinators and perpetrators of surgical experiments performed on inmates of the concentration camps at Ravensbrück and Auschwitz.

Career in the Third Reich

Gebhardt's Nazi career began with his joining the NSDAP on 1 May 1933. Two years later, he also joined the SS and became head physician at the sanatorium of Hohenlychen in the Uckermark, which he changed from a clinic for tuberculosis patients into an orthopedic clinic and later, during World War II, into a hospital for the Waffen-SS. In 1938, Gebhardt was appointed as Heinrich Himmler's personal physician. In May 1942, Himmler ordered Gebhardt dispatched to Prague in order to attend to the injured Reinhard Heydrich[1] after the assassination attempt in Prague, by British Special Operations Executive (SOE) trained soldiers Jozef Gabčík and Jan Kubiš of the Czechoslovakia’s army-in-exile.[2] His refusal to prescribe solphoamide (an early antibiotic) contributed to Heydrich's death and had many unfortunate implications for Concentration camp prisoners who he conducted "medical experiments" on later in World War II.[citation needed]

In early 1944, Gebhardt treated Albert Speer for fatigue and a swollen knee. He nearly killed Speer until he was replaced by another doctor. Himmler saw Speer as a rival for power.

Gebhardt eventually rose to the rank of Gruppenführer in the Allgemeine SS and a Major General (Generalmajor) in the Waffen SS. During World War II, Gebhardt also acted for some time as the President of the German Red Cross.

Having either ordered them or carried them out, Gebhardt was directly responsible for numerous surgical experiments performed on concentration camp inmates. He was particularly active at the women's camp in Ravensbrück (which was close to Hohenlychen) and the camp in Auschwitz. At Ravensbruck he had initially faced opposition from camp commandant Fritz Suhren, who feared future problems given the status of most camp inmates as political prisoners, but the SS leadership backed Gebhardt and Suhren was forced to co-operate.[3]

A particularly brutal series of experiments Gebhardt carried out involved the ability of "patients" to endure long-duration operations. He would often open a subject's skull or abdomen--without the use of anesthesia--and observe how long the subject survived before succumbing to shock or sepsis. His surgical notes, which are impossible to verify, indicate that certain subjects survived nearly 24 hours under such conditions. Gebhardt was often accompanied by a committee of fellow surgeons during these experiments, allowing them to tinker with his subjects' exposed organs during surgery.[citation needed]

By 22 April 1945, the Soviets were massing their Armies to the immediate east of Berlin and Joseph Goebbels brought his wife and children into the Vorbunker. German dictator Adolf Hitler and a few loyal personnel were present in the adjoining Führerbunker to direct the final defence of Berlin.[4] Gebhardt, in his capacity as the Red Cross leader, approached Goebbels about taking the children out of the city with him, but he was dismissed by Goebbels. 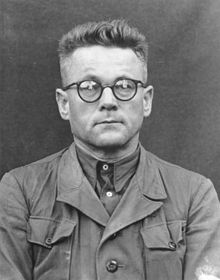 After the war, Gebhardt stood trial in the Doctors' Trial together with 22 other doctors before a U.S. military tribunal, where he was found guilty of war crimes and crimes against humanity and sentenced to death on 20 August 1947. He was hanged on 2 June 1948, in Landsberg prison in Bavaria.

Portrayal in the media

Karl Gebhardt has been portrayed by the following actors in film and television productions.