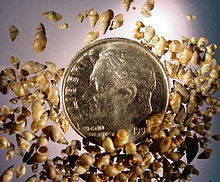 Numerous shells of the freshwater snail Potamopyrgus antipodarum compared to an American dime, which is 18 mm in diameter 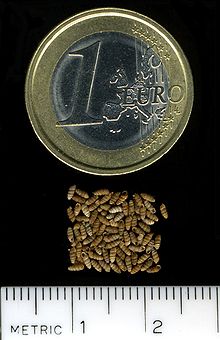 About 90 individuals of the land snail Gastrocopta pellucida hordeacella; The 1 Euro coin is 23 mm across 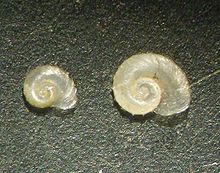 Two shells of the freshwater snail Gyraulus crista, about 2 or 3 mm in width

Six shells of the land snail Columella edentula, the scale bar is in mm

A micromollusk is a descriptive term for a shelled mollusk which is extremely small, even at full adult size. The word is usually, but not exclusively, applied to marine mollusks, although in addition, numerous species of land snails and freshwater mollusks also reach adult size at very small dimensions.

These tiny mollusks or their tiny shells are easy to overlook, as many of them are not very noticeable to the naked eye, and thus many people are not aware that they even exist. Nonetheless there are large numbers of families and vast numbers of mollusk species, in particular marine gastropods or sea snails, which are minute enough to be considered micromollusks.

Certain species of micromollusks are very common in the right habitat, and can on occasion be present in huge numbers. However, because of their minute size, micromollusks often go unnoticed by beachcombers, shell collectors and even more serious conchologists.

Micromollusks are not very popular as a subject of study, even among professional malacologists, primarily because these minute species can be very challenging to work with. It can often require great care, patience and persistence to find micromollusks, sort them, store them, and identify them correctly. Working with them usually also requires special techniques and special equipment compared with that needed for most of the larger shelled species. Discriminating the features necessary for successful identification of micromollusks to the species level almost always requires a stereo or dissecting microscope. Identifying, or adequately photographing, the smallest species may sometimes require a scanning electron microscope. Access to a first rate scientific research library is also often necessary, since many of the popular shell identification books and field guides either omit micromollusks completely, or only include a very few species for any particular area.

Because of all these various challenges, micromollusks are poorly known compared to their larger relatives, and thus there are undoubtedly numerous species which have yet to be discovered and described.

There is currently no universally acceptable definition for the upper limit of the size range for micromollusks. Because of this, the exact use of the word varies from one expert to another; however, the maximum size of the shell of a micromollusk species is usually 5 mm to 7 mm, around one quarter of an inch or less.

The shells of the very smallest micromollusks are less than one millimeter in adult size, and thus they are truly microscopic, smaller in fact than some sand grains. Many other micromollusks are from 2 to 4 mm in maximum size; even for people with small hands, this means that the shells are far too small to be picked up with the fingertips using the normal grasping action.

Micromollusks are most often found by the careful searching of sediment samples which have been taken from "promising-looking" areas.

Once sediment samples are clean and dry, they are searched under the microscope. Minute shells are picked out using a very small sable-hair paintbrush which has been dampened at the tip. Soft entomological tweezers are also sometimes used.

Micromollusk shells are usually stored in small glass vials or in paper micromounts.

For dead shells of marine species on sandy beaches, these minute empty shells wash up in the lightest deposits of beach drift, in more sheltered areas where the very smallest particles of detritus are left behind by the retreating tide; this is often in a rather flat and level part of the beach. When at least some minute shells are seen on close visual inspection, a sediment sample taken at that spot may contain many more.

Underwater in a marine context, for example when scuba diving, a sediment sample is often taken from areas such as the surface layer of sand under rocks, or at the edge of a coral reef. Live micromollusks are also found by washing seaweeds or algae in fresh water in a bucket.

Land micromollusks are often found by taking samples of leaf litter from rich areas, subsequently sieving or sifting the litter, and then searching it under a strong light and magnification.

Freshwater micromollusks which live on aquatic plants are often collected by passing a plankton net vigorously through and around water weeds so that minute mollusks end up falling into the glass tube at the end of the net. Small bottom-dwelling micromollusks such as Pisidium species are found by scooping a bottom sample of mud into a fine meshed long-handled net, and then agitating it and moving it through the water repeatedly, until only solid particles remain in the net.

Because most empty land snail shells and many empty freshwater shells float, another effective way to sample dead shells from an area can be to sort through river drift, the accumulations of small floating bits and pieces left behind by creeks and rivers after floods.

Excluded from the category

Juveniles or larval stages of larger species of mollusk are not considered to be micromollusks, even though these immature shells may sometimes be very small indeed, and may often be encountered in the same sediment samples where micromollusks are found.

The word "micromollusk" is used most often for marine shelled species, although a reasonable number of land and freshwater species are also small enough to qualify as micromollusks: for example, the land snail family Punctidae and the majority of species in the freshwater bivalve genus Pisidium. 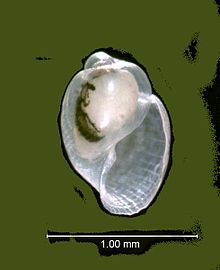