Fuse accommodates a wide range of musical tastes, while targeting a demographic between 18-34 year-olds. It offers music entertainment not only on-air but also on-line (fusemusic.com),[1] on-demand (Fuse On-Demand),[2] in high-definition (Fuse HD) and via mobile (Fuse mobile).[3]

Originally, the network was co-owned by Cablevision and CHUM Limited, and was primarily a simulcast of the Canadian music video channel MuchMusic with the exception of localized commercials, French Kiss, and any imported programming from Viacom, like Pop Up Video and MTV's Video Music Awards and Movie Awards. During these times MuchUSA aired encore presentations of other MuchMusic programming and infomercials.

After CHUM Limited sold its half of the network to Cablevision, it allowed Cablevision to continue running MuchMusic programming and to use the MuchMusic name under a license agreement.

However, in the spring of 2001, Cablevision began airing its own programming on the network under the name "MMUSA" or "MuchMusic USA." Initially, the programming was a locally aired block of music videos with MuchMusic bumpers between commercials.

By June 2001, new localized programming began airing under the "MMUSA" name. This programming was very low budget, and consisted of music videos with color-coded crop bars on the top and bottom of the screen for each show. The non-music-video parts of the show were viewer-submitted videos from the website mmusa.tv, which was highly promoted on the network.

In early 2003, CHUM revoked Cablevision's license to use the MuchMusic and MMUSA name and everything else having to do with it. By April, the network had announced that it would be renamed "Fuse".[5]

On May 19, 2003, just before 6 a.m. Eastern Time, the network aired its final video as MMUSA: New Found Glory's "My Friends Over You". After the video ended, the network went to a commercial break, then returned as Fuse, and with newly licensed television shows like the cult favorite kung-fu-meets-hip-hop-music mash-up known as Kung Faux. 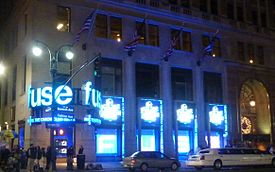 Also in its early days, Fuse programming was very music intensive. The network indirectly bashed MTV with a slogan touting Fuse as the channel "where the music went." Fuse's advertising in this period, by New York-based Amalgamated, generated controversy both through its more direct criticism of MTV – Viacom, corporate owner of MTV and for a short while the former owner of many of Fuse's current sister properties, protested when a Fuse billboard appeared across from its headquarters featuring Sally Struthers' plea to "save the music video" – and through its parodies, particularly that of the iPod ad campaign.[6][7][8][9] In late 2005, Fuse had a week of end-to-end music videos, sponsored by Snapple. Fuse had rights to air programming from IFC such as Whitest Kids You Know and Hell Girl until 2010 when Rainbow lost its rights to Fuse.

In 2008, Fuse signed on to be the exclusive television partner for some major music events, including a three-year deal to air the Rock and Roll Hall of Fame Induction Ceremony.[10] and the Bonnaroo Music and Arts Festival. Fuse also works with the Van's Warped Tour, Voodoo Experience and Lollapalooza, airing interviews and live news from the festivals.

In 2009, Fuse began airing a 2-minute long news show called The Daily Noise which is updated courtesy of Billboard Magazine.

Through the network's Fuse Presents original series, which televises concerts of popular artists from iconic venues, Fuse has featured the following shows:

Fuse profiles some of today's most prominent musicians and celebrities through the network's studio shows, such as On The Record, hosted by Toure, and Fuse Top 20 Countdown hosted by Allison Hagendorf and Juliya.

Fuse has also eliminated its paid programming block in the early morning hours and now operates 24 hours a day.

On June 28, 2011, VEVO and Fuse entered into a video syndication and content partnership. As part of the partnership, Fuse.tv will syndicate VEVO's music video and entertainment programming, including exclusive music video premieres, live music events and originally produced series.[19]