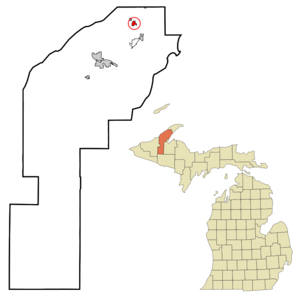 Laurium is a village in Calumet Township, Houghton County in the of , in the center of the . The population was 2,126 at the 2000 census.

Until 1895 Laurium was known as "Calumet" (not to be confused with the present nearby town of Calumet, , which was known as "Red Jacket" until it adopted the name Calumet in 1929). In 1895 the legislature changed Calumet's name to , after the famous mining town in ancient . Laurium is located in the center of the , the first major region in the United States. It was originally founded as a serving the Laurium copper mine, which later became part of the Calumet & Hecla mine. The town was generally home to the wealthier members of Keweenaw society, such as mine owners and captains. Although the mines have long since closed down, the town still sports many large houses and mansions built by the wealthy mine owners. Today, many of the houses are participating locations in the Keweenaw National Historical Park.

Noted 20th Century football player ("the Gipper") was born in Laurium. A small memorial for the football legend is located on the corner of Lake Linden Avenue and Tamarack Street and his grave is in nearby Lake View Cemetery. [ [http://www.cnn.com/2007/US/10/11/gipper.exhumed.ap/index.html Family digs up 'The Gipper' - CNN.com ] ]

The Palestra was a noted hockey arena, built in Laurium in 1904. It is thought to have been the first purpose-built indoor hockey venue in the . In 1921, the entire arena was moved to Marquette, and remained there until it was torn down in 1974.

The Calumet-Laurium-Keweenaw (C-L-K) School District, established in 1867, remains one of the most populated school districts in the area. It serves the two towns named, as well as almost all of Keweenaw County.