The Central Government of India classifies some of its citizens based on their social and economic condition as Scheduled Caste (SC), Scheduled Tribe (ST), and Other Backward Class (OBC). The OBC list presented by the commission is dynamic (castes and communities can be added or removed) and will change from time to time depending on Social, Educational and Economic factors. For example, the OBCs are entitled to 27% reservations in public sector employment and higher education. In the constitution, OBCs are described as "socially and educationally backward classes", and government is enjoined to ensure their social and educational development. 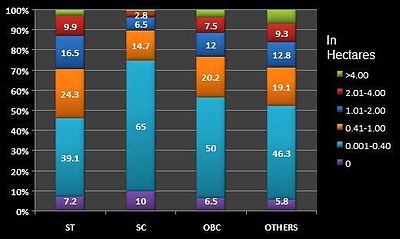 Backward class people is a collective term, used by the Government of India, for castes which are economically and socially disadvantaged. They typically include the Other Backward Classes (OBCs). According to "The Times of India" on 31 August 2010, even after 17 years, at most 7% of seats have been filled by OBCs, regardless of their 27% reservation.[1] This difference between proportion of different communities in Higher educational institutions is mainly because of difference in primary school enrollment. Political parties in India have attempted to use these communities as votebanks.[citation needed]

Obligation of the government

Under Article 340 of the Indian Constitution, it is obligatory for the government to promote the welfare of the Other Backward Classes (OBC). Article 340(1) states, " The president may by order appoint a commission, consisting of such persons as he thinks, fit to investigate the conditions of socially and educationally backward classes within the territory of India and the difficulties under which they labour and to make recommendations as to the steps that should be taken by the union or any state to remove such difficulties and as to improve ‘their condition and as to the grants that should be made, and the order appointing such commission shall define the procedure to be followed by the commission."

Article 340(2) states, "A commission so appointed shall investigate the matters referred to them and present to the president a report setting out the facts as found by them and making such recommendations as they think proper."

The First Backward Classes Commission was set up by a presidential order on January 29, 1953 under the chairmanship of Kaka Kalelkar. The commission submitted its report on March 30, 1955. It had prepared a list of 2,399 backward castes or communities for the entire country and of which 837 had been classified as the "most backward". Some of the most notable recommendations of the commission were:

The commission in its final report recommended "caste as the criteria" to determine backwardness. But this report was not accepted by the government as it feared that the backward classes excluded from the caste and communities selected by the commission may not be considered and the really needy would be swamped by the multitude and would hardly receive special attention.

The decision to set up a second backward classes commission was made official by the president on January 1, 1979. The commission popularly known as the Mandal Commission, its chairman being B. P. Mandal, submitted a report in December 1980 that stated that the population of OBCs, which includes both Hindus and non-Hindus, was around 52 per cent of the total population according to the Mandal Commission.

However, this finding was criticized as based on "fictitious data". The National Sample Survey puts the figure at 32%.[2] There is substantial debate over the exact number of OBCs in India, with census data compromised by partisan politics. It is generally estimated to be sizable, but lower than the figures quoted by either the Mandal Commission or and National Sample Survey.[3]

These recommendations in total are applicable to all recruitment to public sector undertakings, both under the central and state governments as well as to nationalised banks. All private sector undertakings which have received financial assistance from the government in one form or other should also be obliged to recruit personnel on the aforesaid basis. All universities and affiliated colleges should also be covered by the above scheme of reservation. Although education is considered an important factor to bring a desired social change, "educational reform" was not within the terms of reference of this commission. To promote literacy the following measures were suggested:

On 29 March 2007, the Supreme Court of India, as an interim measure, stayed the law providing for 27 percent reservation for Other Backward Classes in educational institutions like IITs and IIMs. This was done in response to a public interest litigation — Ashoka Kumar Thakur vs. Union of India. The Court held that the 1931 census could not be a determinative factor for identifying the OBCs for the purpose of providing reservation. The court also observed, "Reservation cannot be permanent and appear to perpetuate backwardness".[4]

On 10 April 2008 the Supreme Court of India upheld the government's initiative of 27% OBC quotas in government-funded institutions. The Court has categorically reiterated its prior stand that those considered part of the "Creamy layer" should be excluded from the scope of the reservation policy as well as from private institutions. The verdict produced mixed reactions from supporting and opposing quarters. Several criteria to identify the portion of the population comprising the "creamy layer" have been recommended, including the following:[5]

Those with family income above Rs 250,000 a year (now Rs 450,000 a year,As of October 2008[update]) should be in creamy layer, and excluded from the reservation quota. Also, children of doctors, engineers, chartered accountants, actors, consultants, media professionals, writers, bureaucrats, defence officers of colonel and equivalent rank or higher, high court and Supreme Court judges, all central and state government Class A and B officials should be excluded. The Court has requested Parliament to exclude MPs’ and MLAs’ children as well.