A phase response curve (PRC) illustrates the transient change in the cycle period of an oscillation induced by a perturbation as a function of the phase at which it is received. PRCs are used in various fields; examples of biological oscillations are the heartbeat, circadian rhythms, and the regular, repetitive firing observed in some neurons in the absence of noise [1] 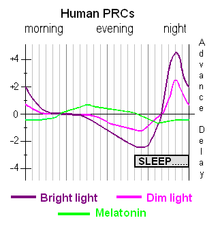 Phase response curves for light and for melatonin administration

In circadian rhythm research, a PRC illustrates the relationship between the timing and the effect of a treatment designed to affect circadian rhythms. Normally, the various rhythms will be in synchrony within an individual (human or animal), and sleep–wake is the most obvious of these rhythms. For humans, a treatment designed to affect circadian rhythms will most often be intended to adjust sleep timing, either delaying it to later in the day (night), or advancing it. Extreme morning people may want to delay their sleep timing; extreme evening chronotypes may wish to advance it.

A PRC is a graph showing, by convention, time of the subject's endogenous day along the x-axis and the amount of the phase shift (in hours) along the y-axis. The curve has one peak and one nadir in each 24 hour cycle. Relative circadian time is plotted vs. phase shift magnitude.

The two common treatments used to shift the timing of sleep are light therapy, directed at the eyes, and administration of the hormone melatonin, usually taken orally. Either or both can be used daily. Each of these treatments has its own PRC which will vary according to the species being studied; its shape may also vary individually, just slightly. The magnitude is dose-dependent.[2] The discussions below are restricted to the human PRCs for the chronobiotics light and melatonin. 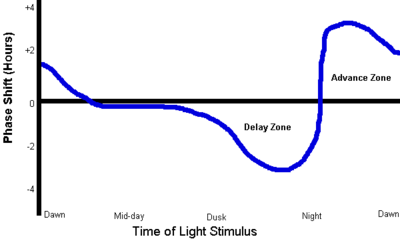 The time shown on the x-axis is vague: dawn – mid-day – dusk – night – dawn. These times do not refer to actual sun-up etc. nor to specific clock times. Each individual has her/his own circadian "clock" and chronotype, and dawn in the illustration refers to a person's time of spontaneous awakening when well-rested and sleeping regularly. The PRC shows when a stimulus, in this case light to the eyes, will effect a change, an advance or a delay. The curve's highest point coincides with the subject's lowest body temperature.

Starting about two hours before bedtime, exposure to bright light will delay the circadian phase, causing later wake-up time and later sleep onset. The delaying effect gets stronger as evening progresses. About five hours after usual bedtime, coinciding with the lowest point of the body temperature rhythm (also known as the body temperature nadir), the PRC peaks and the effect changes abruptly from phase delay to phase advance. Immediately after this peak, bright light exposure has its greatest phase-advancing effect, causing earlier wake-up and sleep onset. The effect diminishes until about two hours after spontaneous wake-up time, when it reaches zero. During the period between two hours after usual wake-up time and two hours before usual bedtime, bright light exposure has little or no effect on circadian phase (slight effects generally cancelling each other out).

Another image of the PRC for light is here.

Light therapy, typically with a light box producing 10,000 lux at a prescribed distance, can be used in the evening to delay or in the morning to advance one's sleep timing. Because losing sleep to obtain bright light exposure is considered undesirable by most people, and because it's very difficult to estimate exactly when the greatest effect (the PRC peak) will occur in an individual, the treatment is usually applied just prior to bedtime (to achieve phase delay), or just after spontaneous awakening (to achieve phase advance).

In 2002, Brown researchers, led by David Berson, announced the discovery of special cells in the human eye, ipRGCs (intrinsically photosensitive retinal ganglion cells),[3] which many researchers now believe control the light entrainment effect of the phase response curve. In the human eye, the ipRGCs have the greatest response to light in the 460–480 nm (blue) range. In one experiment, 400 lux of blue light produced the same effects as 10,000 lux of white light.[4] Furthermore, there is now evidence for a theory of spectral opponency, in which the addition of other spectral colors renders blue light less effective for circadian phototransduction.[5]

The phase response curve for melatonin is roughly twelve hours out of phase with the phase response curve for light. At spontaneous wake-up time, exogenous (externally-administered) melatonin has a slight phase-delaying effect. The amount of phase-delay increases until about eight hours after wake-up time, when the effect swings abruptly from strong phase delay to strong phase advance. The phase-advance effect diminishes as the day goes on until it reaches zero about bedtime. From usual bedtime until wake-up time, exogenous melatonin has no effect on circadian phase.

The human body produces its own (endogenous) melatonin starting about two hours before bedtime, provided the lighting is dim. This is known as dim-light melatonin onset, DLMO. This stimulates the phase-advance portion of the PRC and helps keep the body on a regular sleep-wake schedule. It also helps prepare the body for sleep.

Administration of melatonin at any time may have a mild hypnotic (sleep-inducing) effect. The resultant effect on sleep phase, if any, is governed by the PRC.

In a newer study (2006), Victoria L. Revell et al. have shown that a combination of morning bright light and afternoon melatonin, both timed to phase advance according to the respective PRCs, produce a larger phase advance shift than bright light alone,[6] for a total of up to 21⁄2 hours.

All times are approximate and vary among individuals. In particular, there is no convenient way of determining the exact timing of the peaks of these curves in an individual. For this reason, administration of light and/or melatonin should generally be avoided for at least an hour on either side of the expected time of the abrupt change of effect. This provides a safety margin to avoid producing the opposite effect of the intended one.

Origin of the PRC

The first published usage of the term "phase response curve" was in 1960 by Patricia DeCoursey. The "daily" activity rhythms of her flying squirrels, kept in constant darkness, responded to pulses of light exposure. The response varied according to the time of day—that is, the animals' subjective "day"—when light was administered. When DeCoursey plotted all her data relating the quantity and direction (advance or delay) of phase-shift on a single curve, she created the PRC. It has since been a standard tool in the study of biological rhythms.[7]

Phase response curve analysis can be used to understand the intrinsic properties and oscillatory behavior of regular-spiking neurons.[8] The neuronal PRCs can be classified as being purely positive (PRC type I) or as having negative parts (PRC type II). Importantly, the PRC type exhibited by a neuron is indicative of its input–output function (excitability) as well as synchronization behavior: networks of PRC type II neurons can synchronize their activity via mutual excitatory connections, but those of PRC type I can not.[9]

Experimental estimation of PRC in living, regular-spiking neurons involves measuring the changes in inter-spike interval in response to a small perturbation, such as a transient pulse of current. Notably, the PRC of a neuron is not fixed but may change when firing frequency[10] or neuromodulatory state of the neuron[11] is changed.