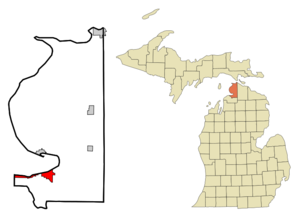 Petoskey and the surrounding area are notable for being the setting of several of the Nick Adams stories by , who spent his childhood summers on nearby , as well as being the place where for Calliope the protagonist of ' "Middlesex" life takes a severe and lasting turn.

Petoskey is also famous for a high concentration of s, the state stone of Michigan. Petoskey is the birthplace of Information Theorist and Civil War Historian and is the boyhood home of singer/songwriter .

The name "Petoskey" is said to mean "where the light shines through the clouds" in the language of the Odawa Indians (Little Traverse Bay Band), who are the original inhabitants. But what is verifiable is that the Petoskey stone and the city were named after Chief Ignatius Petosega (1787-1885), who founded the community. Petoskey's father was a French fur trader and his mother was an Odawa (Ottawa) Indian.

This city was the northern terminus of the .

There were 2,700 households out of which 27.5% had children under the age of 18 living with them, 39.8% were married couples living together, 11.0% had a female householder with no husband present, and 46.4% were non-families. 39.4% of all households were made up of individuals and 14.6% had someone living alone who was 65 years of age or older. The average household size was 2.14 and the average family size was 2.89.

* Freight rail service to Petoskey is limited and provided by the (TSBY); however, the tracks are owned by the state of Michigan in order to preserve rail service in northern Michigan. Freight traffic includes plastic pellets delivered to a rail/truck facility for Petoskey Plastics. Occasional passenger excursion trains to Petoskey are operated by . Historically, the and other rail lines provided passenger traffic to Petoskey and Bay View, from as far as and , but these were discontinued in the late 20th century.

* The [http://www.ci.petoskey.mi.us City of Petoskey Department of Parks and Recreation] operates a 100-slip marina located in Bayfront Park. The marina offers seasonal and transient slips, gasoline, diesel fuel, boat launch, wireless internet, 30/50 AMP power, water, pump-out, restroom/showers, playground and adjacent park grounds. The Gaslight District is connected to Bayfront Park via a pedestrian tunnel. The marina received designation of a [http://www.miseagrant.umich.edu/cmp/index.html "Michigan Clean Marina"] in May of 2007. Reservations may be made via the [http://www.midnrreservations.com State of Michigan DNR Reservation System] .