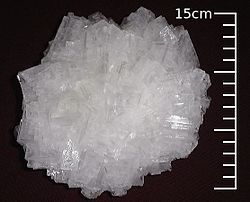 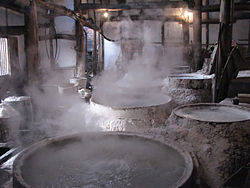 Ancient method of boiling brine into pure salt in China

Salt's ability to preserve food was a foundation of civilization. It eliminated the dependence on the seasonal availability of food and it allowed travel over long distances. However, salt was difficult to obtain, and so it was a highly valued trade item. Many salt roads, such as the via Salaria in Italy, had been established by the Bronze age.

There have been two main sources for salt: sea water and rock salt. Rock salt occurs in vast beds of sedimentary evaporite minerals that result from the drying up of enclosed lakes, playas, and seas. Salt beds may be up to 350 m thick and underlie broad areas. In the United States and Canada extensive underground beds extend from the Appalachian basin of western New York through parts of Ontario and under much of the Michigan basin. Other deposits are in Texas, Ohio, Kansas, New Mexico, Nova Scotia, and Saskatchewan. In the United Kingdom underground beds are found in Cheshire and around Droitwich. Salzburg, Austria, was named "the city of salt" for its mines.[1] Tuzla in Bosnia and Herzegovina were named "place of salt" by Turks.

Salt is extracted from underground beds either by mining or by solution mining using water. In solution mining the salt reaches the surface as brine, which is then turned into salt crystals by evaporation.

Aside from being a contributing factor in the development of civilization, salt was also used in the military practice of salting the earth by various peoples, beginning with the Assyrians.

It is commonly believed that Roman soldiers were at certain times paid with salt. (They say the soldiers who did their job well were "worth their salt.)"[2] [3][4] This, however, is debatable: 'salary' derives from the Latin word salārium, possibly referring to money given to soldiers so they could buy salt.[5] The Roman Republic and Empire controlled the price of salt, increasing it to raise money for wars, or lowering it to be sure that the poorest citizens could easily afford this important part of the diet.

It was also of high value to the Hebrews, Greeks, the Chinese and other peoples of antiquity.

Already in the early years of the Roman Republic, with the growth of the city of Rome, roads were built to make transportation of salt to the capital city easier. An example was the Via Salaria (originally a Sabine trail), leading from Rome to the Adriatic Sea. The Adriatic Sea, having a higher salinity due to its shallow depth, had more productive solar ponds compared with those of the Tyrrhenian Sea, much closer to Rome.

During the late Roman Empire and throughout the Middle Ages salt was a precious commodity carried along the salt roads into the heartland of the Germanic tribes. Caravans consisting of as many as forty thousand camels traversed four hundred miles of the Sahara bearing salt to inland markets in the Sahel, sometimes trading salt for slaves: Timbuktu was a huge salt and slave market.

In the Old Testament, Mosaic law called for salt to be added to all burnt animal sacrifices (Lev. 2:13).

The Book of Ezra (550 BC to 450 BC) associated accepting salt from a person with being in that person's service. In Ezra 4:14, the servants of Artaxerxes I of Persia explain their loyalty to the King. When translated, it is either stated literally as "because we have eaten the salt of the palace" or more figuratively as "because we have maintenance from the king".

Salt is used as a metaphor in the Bible. In the New Testament, Matthew 5:13, Jesus said, "You are the salt of the earth". He added that if the salt loses its flavor, it is good for nothing but to be trampled. Jesus said this in order to show his disciples how valuable they were and this saying is commonly used today to describe someone who is of particular value to society. In addition, the preservative quality of salt is in view here to show how the disciples were called to preserve the society and the world around them from moral decay. On another occasion, according to the Gospels, Jesus commanded his followers to "have salt within them". 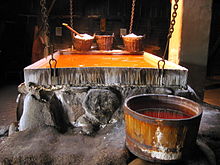 Salt has played a prominent role in determining the power and location of the world's great cities. Liverpool rose from just a small English port to become the prime exporting port for the salt dug in the great Cheshire salt mines and thus became the entrepôt for much of the world's salt in the 19th century.[1]

Salt created and destroyed empires. The salt mines of Poland led to a vast kingdom in the 16th century, only to be destroyed when Germans brought in sea salt (to most of the world, considered superior to rock salt). Venice fought and won a war with Genoa over salt. However, Genoese Christopher Columbus and Giovanni Caboto would later destroy the Mediterranean trade by introducing the New World to the market.[1]

Cities, states and duchies along the salt roads exacted heavy duties and taxes for the salt passing through their territories. This practice even caused the formation of cities, such as the city of Munich in 1158, when the then Duke of Bavaria, Henry the Lion, decided that the bishops of Freising no longer needed their salt revenue.[1]

The gabelle—a hated French salt tax—was enacted in 1286 and maintained until 1790. Because of the gabelles, common salt was of such a high value that it caused mass population shifts and exodus, attracted invaders and caused wars.[1]

In American history, salt has been a major factor in outcome of wars. In the Revolutionary War, the British used Loyalists to intercept Rebel salt shipments and interfere with their ability to preserve food.[1] During the War of 1812, salt brine was used to pay soldiers in the field, as the government was too poor to pay them with money.[citation needed] Before Lewis and Clark set out for the Louisiana Territory, President Jefferson in his address to Congress mentioned a mountain of salt supposed to lie near the Missouri River, which would have been of immense value, as a reason for their expedition. (By 1810, new discoveries along the Kanawha and Sandy Rivers had greatly reduced the value of salt.){{

Wich and wych are names associated (but not exclusively) with brine springs or wells in England. Originally derived from the Latin vicus, meaning place, by the 11th century use of the 'wich' suffix in placenames was associated with places with a specialised function including that of salt production.[6] Several English places carry the suffix and are historically related to salt, including the four Cheshire 'wiches' of Middlewich, Nantwich, Northwich and Leftwich (a small village south of Northwich), and Droitwich in Worcestershire. Middlewich, Nantwich, Northwich and Droitwich are known as the Domesday Wiches due to their mention in the Domesday Book, "an indication of the significance of the salt-working towns in the economy of the region, and indeed of the country".[6]

During more modern times, it became more profitable to sell salted food than pure salt. Thus sources of food to salt went hand in hand with salt making. The British controlled saltworks in the Bahamas as well as North American cod fisheries.[1] This may have added to their economic clout during their 19th century imperial expansion period. The search for oil in the late 19th and early 20th centuries used the technology and methods pioneered by salt miners, even to the degree that they looked for oil where salt domes were located.[1] see Spindletop

On an industrial scale, salt is produced in one of two principal ways: the evaporation of salt water (brine) or by mining. Evaporation can either be solar evaporation[7] or using some heating device.

In the correct climate (one for which the ratio of evaporation to rainfall is suitably high) it is possible to use solar evaporation of sea water to produce salt. Brine is evaporated in a linked set of ponds until the solution is sufficiently concentrated by the final pond so that the salt crystallizes on the pond's floor.

One of the traditional methods of salt production in more temperate climates is using open pans.[8] In an open pan, salt brine is heated in large, shallow open pans. Earliest examples date back to prehistoric times and the pans were made of either a type of ceramic called briquetage, or lead. Later examples were made from iron. This change coincided with a change from wood to coal for the purpose of heating the brine.[9] Brine would be pumped into the pans and concentrated by the heat of the fire burning underneath. As crystals of salt formed, these would be raked out and more brine added.

The open pan salt works has effectively been replaced with a closed pan system where the brine solution is evaporated under a partial vacuum.[10]

In the second half of the 19th century, industrial mining and new drilling techniques made the discovery of more and deeper deposits possible, increasing mine salt's share of the market. Although mining salt was generally more expensive than extracting it from brine via solar evaporation of seawater, the introduction of this new source reduced the price of salt due to a reduction of monopolization. Extraction of salt from brine is still heavily used, for example, vacuum salt produced by British Salt in Middlewich has 57% of the UK market [11] for salt used in cooking.

The earliest systematic exposition of the different kinds of salts, its uses, and the methods of its extraction was published in China around 2700 BCE.[citation needed] Hippocrates encouraged his fellow healers to make use of salt water to heal various ailments by immersing their patients in sea water. The ancient Greeks continued this, and in 1753, English author and physician Dr. Charles Russel published "The Uses of Sea Water".