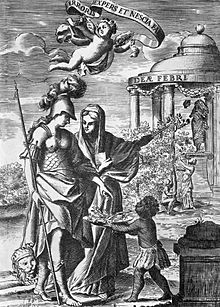 Peru offers a branch of cinchona to Science (from a 17th century engraving). Cinchona genus is the source of Peruvian Bark, an important historical remedy against malaria.

Jesuit's Bark, also called Peruvian Bark, is the historical name of the most celebrated specific remedy for all forms of malaria. It is so named because it was obtained from the bark of several species of the genus Cinchona, of the order Rubiaceae, that have been discovered at different times and are indigenous in the Western Andes of South America and were first described and introduced by Jesuit priests who did missionary work in Peru. Other terms referring to this preparation and its source were "Jesuit's Tree", "Jesuit's Powder" and "Pulvis Patrum".

Formerly, the bark itself, prepared in different forms, was used as a drug, but later in the nineteenth and early 20th centuries, natural harvesting of immense quantities formed the base of the production of cinchona alkaloids. This industry was carried on principally in Germany, and the Dutch and English cinchona plantations in Java, Ceylon and India were the chief sources whence the raw material was supplied. Its main active principle, quinine, is now chemically synthesized. The term quinine comes from ghina, or quina-quina, the name given by Peruvian Indians to the bark, meaning medicine of medicines or bark of barks.

The history of cinchona bark, which dates back more than 300 years, has greatly influenced that of pharmacy, botany, medicine, trade, theoretical and practical chemistry, and tropical agriculture. Circa 1650, the physician Sebastiano Bado declared that this bark had proved more precious to mankind than all the gold and silver that the Spaniards had obtained from South America, and the world confirmed his opinion. In the 18th century, the Italian professor of medicine Ramazzini said that the introduction of Peruvian bark would be of the same importance to medicine that the discovery of gunpowder was to the art of war, an opinion endorsed by contemporary writers on the history of medicine. The value of Jesuit's bark, and the controversy surrounding it, were both recognized by Benjamin Franklin, who wittily commented upon it in his Poor Richard's Almanac for October, 1749, telling the story of Robert Talbot's use of it to cure the French Dauphin. Whoever has searched the annals of cinchona will recognize the truth of the following observations of Weddel (d. 1877): "Few subjects in natural history have excited general interest in a higher degree than cinchona; none perhaps have hitherto merited the attention of a greater number of distinguished men". Dissension, however, was rife at the time, mainly due to its source of discovery, the Jesuits. As the great Alexander von Humboldt said, "It almost goes without saying that among Protestant physicians hatred of the Jesuits and religious intolerance lie at the bottom of the long conflict over the good or harm effected by Peruvian Bark". 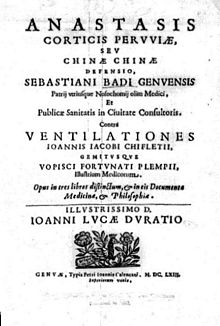 The Spanish Jesuit missionaries in Peru were taught the healing power of the bark by natives, between 1620 and 1630, when a Jesuit at Loxa was indebted to its use for his cure from an attack of malaria (Loxa Bark). It was used at the recommendation of the Jesuits in 1630, when the Countess of Chinchon (Cinchon; the derivative is Cinchona, the appellation selected by Carolus Linnaeus in 1742; Markham preferred Chinchona), wife of the new viceroy, who had just arrived from Europe, was taken ill with malaria at Lima. The countess was saved from death, and in thanksgiving caused large quantities of the bark to be collected. This she distributed to malaria sufferers, partly in person and partly through the Jesuits of St. Paul's College at Lima (pulvis comitissæ). She did not return to Europe and was not the first to bring the bark there or to spread its use through Spain and the rest of the continent, as stated by Markham. For the earliest transportation of the bark we must thank the Jesuit Barnabé de Cobo (1582–1657; the Cobæa plant), who rendered important services in the exploration of Mexico and Peru. In his capacity of procurator of the Peruvian province of his order, he brought the bark from Lima to Spain, and afterwards to Rome and other parts of Italy, in 1632. In the meanwhile its merits must have been ascertained both in Lima and in various parts of Europe, as Count Chinchon and his physician Juan de Vega brought it back with them in 1640.

Count Chinchon, however, troubled himself little about the use or sale of the bark. A greater distribution resulted from the large quantity brought over by the Jesuit Bartolomé Tafur, who, like Cobo, came to Spain in 1643 while procurator of the Peruvian province of his order, proceeded through France (there is an alleged cure of the young Louis XIV, when still dauphin, effected by Father Tafur by means of Peruvian bark), and thence to Italy as far as Rome.

The celebrated Jesuit theologian John de Lugo, who became a cardinal in 1643, learned about the cinchona from Tafur, and remained from 1643 until his death in 1660 its faithful advocate, zealous defender, and generous, disinterested dispenser in Italy and the rest of Europe, for which he was honoured in the appellation of pulvis cardinalis, pulvis Lugonis, and by having several portraits painted of him. De Lugo had the bark analysed by the pope's physician in ordinary, Gabriele Fonseca, who reported on it very favourably. Its distribution among the sick in Rome took place only on the advice and with the consent of the Roman doctors. The cardinal had more bark brought from America over the trade routes through Spain. Almost all the other patrons of the drug in those times appear to have been directly influenced by de Lugo; as, for instance, the lay brother Pietro Paolo Pucciarini, S. J. (1600–1661), apothecary in the Jesuit College at Rome, who undoubtedly deserves the greatest credit after de Lugo for distributing the genuine unadulterated article, and to whom are attributed the Roman directions for its use (Schedula Romana), the earliest dating at least from 1651.

In his friend Honoré Fabri, a French Jesuit, who stayed for a time in Rome, de Lugo won a determined defender of the bark against the first anticinchona pamphlet written by the Brussels doctor Jean-Jacques Chifflet. Under the pseudonym of Antimus Conygius, Fabri wrote in 1655 the first paper on cinchona published in Italy, as well as the first of the long list of brochures defending its use and the only independent article on this bark which has been issued by a Jesuit. The two Genoese, Girolamo Bardi, a priest, and Sebastiano Baldo, a physician, who were among the pioneer advocates of the plant, were intimate with the cardinal, and Baldo prefixed to his principal work a letter from de Lugo, dated 1659, on cinchona, which shows that the cardinal even when seventy-seven years old was still active in its behalf.

Circumstances created a suitable opportunity for disseminating the bark from Rome throughout Europe by means of the Jesuits. In 1646, 1650, and 1652 the delegates to the eighth, ninth, and tenth general councils of the order (three from each province) returned to their homes, taking it with them, and at the same time there is evidence of its use in the Jesuit colleges at Genoa, Lyon, Leuven, Ratisbon, etc. The remedy — connected with the name of Jesuit — very soon reached England. The English weekly Mercurius Politicus in 1658 contained in four numbers the announcement that: "The excellent powder known by the name of 'Jesuit's powder' may be obtained from several London chemists". It remains to recall the fact that even in the seventeenth and 18th centuries the bark kept in the Jesuit pharmacies or in their colleges was considered particularly efficacious because they were better able to provide a genuine unadulterated supply. Further, that in those two centuries Jesuit missionaries took the remedy to the malaria regions of foreign countries, even reaching the courts of Peking in China and Kyoto in Japan, where they cured the emperor by its means; that in Peru during the 18th century they urged American collectors to lay out new plantations; and in the 19th century they were the first to plant cinchona outside of South America.