Video production is videography, the process of capturing moving images on electronic media (e.g., video tape, direct to disk recording, or solid state storage like a tapeless camcorder) even streaming media. The term includes methods of production and post-production. It is the equivalent of filmmaking, but with images recorded electronically instead of film stock.

It is the art and service of creating content, video editing and delivering a finished video product as is the case of distributing television programs for broadcast syndication. This can include production of television commercials, corporate videos, event videos, wedding videos and special-interest home videos. A video production can range in size from a family making home movies with a prosumer camcorder, a one solo camera operator with a professional video camera in a single-camera setup (aka a "one-man band"), a videographer with a sound person, to a multiple-camera setup shoot in a television studio to a production truck requiring a whole television crew for an electronic field production (EFP) with a production company with set construction on the backlot of a movie studio.

Styles of shooting include on a tripod (aka "sticks")[1] for a locked-down shot; hand-held to attain a more jittery camera angle or looser shot, incorporating Dutch angle, Whip pan and whip zoom; on a jib that smoothly soars to varying heights; and with a Steadicam for smooth movement as the camera operator incorporates cinematic techniques moving through rooms, as can be seen in Pulp Fiction and The Shining. A "Poor Man's Steadicam" is the Easyrig[2] which is worn by the shooter like a tight vest with an arm that holds the camera. 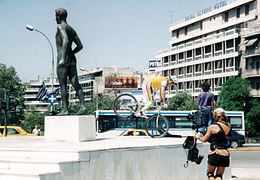 File:Video Production Revolution Ride San Diego.jpMooneyCorporate video production covers a wide range of purposes from corporate communication, training and education, videotaping conferences and conventions, products and services, and sales. A popular type of corporate shoot is known as the "candids" or "happy-face" video, in which a multiple-day event is covered by a video crew, including speakers, break-out sessions, awards ceremonies and local recreational activities in which the conventioneers participate. An on-site editor then creates a short video presentation that is shown before the close of the convention. Many associations take advantage of the convention venue to gather interviews of their principals, setting up a green screen or other type of background in a secluded room. 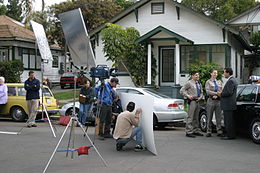 Betacam SP video production has been the broadcast television standard from the early 1980s up until the beginning of the 21st Century when many television stations began to use digital media to shoot, transmit and store their footage. Two styles of producing video are ENG - Electronic news-gathering and EFP - Electronic field production. Television video productions include television commercials, infomercials, newscasts, entertainment shows, documentaries, sitcom and reality shows.

Video production can be used at sporting, school, stage, wedding, church, and similar events to provide recordings of the events. Event video productions range in distribution from a wedding video that is custom made for a bride and groom and their immediate family and friends, to a dance recital where dozens to hundreds of videos are sold to individual dancers. Event video production can also be used to broadcast events live to viewers at home such as a press conference or concert. Video of live events can be sent by microwave or a satellite truck from the event location to a television studio in order to be broadcast.[3]

Marketing videos are used to promote an organization or product and create awareness among consumers. Marketing video production ranges from Television advertisement to webmercials and viral videos.

As the internet develops video is having a changing application too. Videos are the second biggest search engine on the internet (YouTube) second to Google. Video Production with SEO and internet focus is a new thing on the web.

Training videos are commissioned by organizations to promote make changes in workforce.